Planet formation in our solar system followed a variety of paths, leading in
most cases to finished planets: rocky bodies in the inner solar system,
gas giants in the middle region, and icy planets in the outer solar system.
However, the planet-forming process was interrupted in two regions – the
Kuiper Belt (with the exception of Pluto) and the asteroid belt – leaving a
vast population of small bodies instead of a single planet or planets.
Accretion formed numerous protoplanets in the region between Mars and Jupiter,
certainly Ceres-sized bodies formed, and perhaps even
Mars-sized bodies. These large bodies would have gravitationally perturbed
the local population, increasing collision speeds, and terminating accretion
among small bodies. Fragmentation and disruption commenced.

Some asteroidal protoplanets were large enough that they were not fragmented,
but continued to grow in this new environment. Jupiter was also forming,
accreting (in addition to rocky material) great amounts of ices and gases
which were unable to condense in the warmer region of the inner solar system.
Jupiter’s large mass and orbital location created strong resonance locations
in the asteroid region that quickly removed any body unlucky enough to move
into one. This depletion mechanism removed most of the primordial mass in
the asteroid belt and finally cut off the material needed there for further
planetary growth.

Today, main belt asteroids consist of a few unshattered protoplanets (e.g.,
Ceres, Pallas, Vesta) and disrupted protoplanets whose pieces were shattered
and dispersed, then further shattered and dispersed leaving the hundreds of
thousands of fragments that dominate the main asteroid belt today (e.g., Eros,
Gaspra, Ida). While the boundary between the two populations may have some
fuzziness (containing perhaps small shattered protoplanets that were not
dispersed), these fragments tend to be relatively homogeneous, and protoplanets
are more complex (particularly the differentiated Vesta).

The pot has been stirred dynamically and collisionally over the age of the
solar system, yet it retains evidence of initial conditions and planet
formation and evolution. Some asteroids have shifted into Earth-crossing
orbits, causing concerns about the hazard of impact and interest in their
potential as resources for human activity in space. The primoridial outer
main belt may have been the source of Earth’s water (Moridelli et al. 2000),
thus critical to the existence of life on Earth.
Destructive asteroid collisions have also been a source of interplanetary dust,
generating much of our zodiacal cloud. The detection of non-primordial dust
disks around other stars suggests that asteroids and the collisional processes
we observe in our solar system occurs elsewhere in the universe.

There are a heierarchy of questions that motivate almost all of asteroid
science which are rooted in our knowledge of the present. In earlier decades
asteroid science focussed primarily on the gathering of basic data from which
derives our modern understanding of the processes operating in the asteroid
belt at present and in the past. This is a neverending process. Our
continuously expanding capabilities to gather a wider range of more detailed
data over a larger number of objects continues both allows for more
sophisticated, detailed, and overarching models, as well as more challenges
to them. Asteroid science is dynamic.

On the basis of what we know today of the asteroid belt as a site of interrupted
terrestrial planet formation and of complex collisional and dynamical activity,
there are three fundamental questions that we consider to be key. They are
listed below along with the next level of questions that derive from them:

A. What was the compositional gradient of the asteroid belt at the time of
initial protoplanetary accretion?

B. What fragments originated from the same protoplanetary body, and what was
the original distribution of those parent bodies?

C. What are the early steps in planet formation and evolution?

III. HOW CAN THE KEY SCIENCE QUESTIONS BE ADDRESSED?

This requires acquiring data on the composition and physical properties of
a massive number of asteroids. Some information (albedos and diameters) may
be acquired for a very large sample of asteroids over a relatively short
period of time from an orbiting spacebased facility, but other information
such as spectral reflectance, lightcurves and phase curves, radar determined
properties and morphology, are necessarily acquired one object at a time and
requires a sustained program to support such observations.

Relating observations to compositions requires an understanding of how
spectra relate to specific minerologies and how surface scattering properties
effect that relationship. In addition, the effects of surface impacts and
space weathering over time must be understood. This requires laboratory studies
of meteorites and terrestrial analogs of other interplanetary materials.

Leveraging composition from spectra may be limited when the bulk composition
of an asteroid are not optically active minerals or their spectra is masked
(e.g., by low-albedo carbonaceous material). Unfortunately, not all asteroid
compositions are thought to be represented in meteorite collections. This
situation might be improved with samples from dozens of targetted asteroids,
but this is not practical in the next decade.

Even given a detailed information on the modern compositional structure
of the asteroid belt, inferring its primordial structure requires an
understanding of the various dynamical processes acting on asteroid orbits,
such as gravitational perturbations, chaotic scattering, Yarkovsky effects,
collisions, etc. It also requires an understanding of collision mechanics
and the preferential erosion of some compositions with their associated
physical properties from the modern population of objects.

An important part of gathering information needed to address the key questions
above is the brute force observations of many thousands of main belt asteroids.
Fundamental observations include low-resolution spectroscopy and lightcurve
studies. 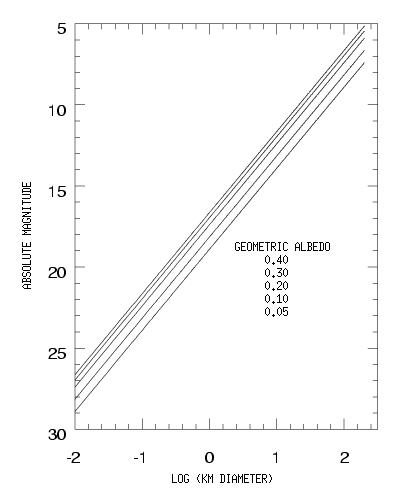 How many asteroids are there for which spectra can be obtained using
low-resolution systems on telescopes of different apertures? [I am thinking of
figures showing diameter vs au for different albedos with curves indicating
the limits of different aperture systems – what would it take to get everything
having a diameter greater than 100, 50, 10, 5, 1 km?] 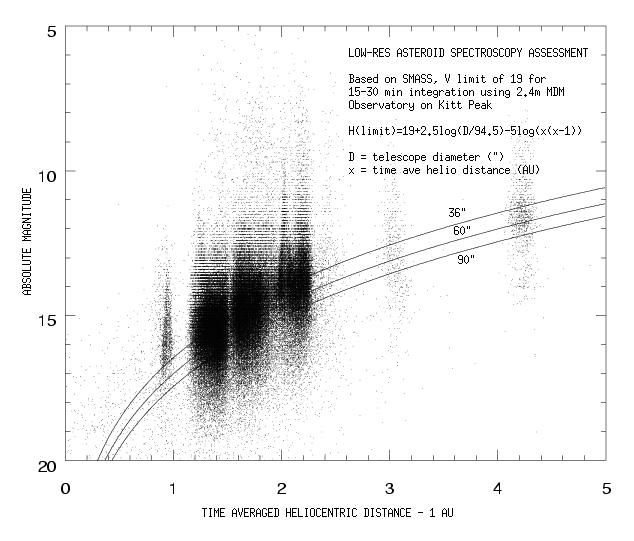 Q: What programmatic resources (x number of telescopes operating y nights a
year at a funding level of z for w years) would be required to obtain spectra
of all asteroids above a given diameter?

Q: To what extent has the job been done?

Even modest aperture telescopes are capable of doing lightcurve studies of
tens of thousands of asteroids. This suggests an opportunity for small
institutions to engage in such studies, perhaps leveraging basic science
education opportunities for students while contributing to very basic
knowledge about asteroids. 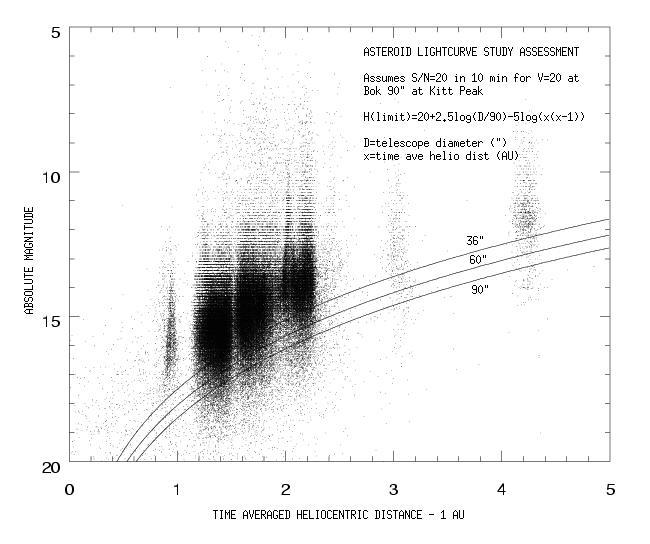 Q: What laboratory programs are needed to support this effort? Meteorites are
being collected all the time. Is there a an ongoing program(s) which generate
ongoing information useful to asteroid spectroscopy?

Q: Radar can provide information surface properties, reflectivity, spin state,
and morphology. To what extent can radar be used to probe the properties of
main belt asteroids? For current facilities, what is the diameter/distance
(for a given reflectivity) limits for generating morphology models and
determining radar reflectance properties? How many asteroids do these include?
What programmatic resources would be required to obtain properties/morpholodies
for them?

Q: What upgrades to radar facilities are planned or desired for the next decade
and how would such upgrades impact the above question?

Arecibo has been recently upgraded and should reach its nominal sensitivity
perhaps within a year. Support for personnel at Arecibo and for asteroid
radar astronomers could certainly be better.

Q: An orbiting IRAS-like facility (with perhaps a larger aperture and modern
detectors) in a polar orbit could detect what fraction of main-belt asteroids
above what diameter at a given heliocentric distance? Since Earth’s angular
motion is greater than that of MBAs, a sweep of all ecliptic longitudes at
90 degrees solar elongation over the course of a year could sample almost
all detectible MBAs. A visible light channel would be needed (having no thermal
component) to ascertain albedos and diameters. How would pointing mode
observations (e.g., to map out collisional debris structures or comet dust
distributions) impact the completeness of the survey? Would it make more sense
to accumulate all pointed observations to the beginning and end of the mission?

Q: What is the status of programs supporting laboratory studies of meteorites
and materials applicable to the interpretation of remote sensing observations
of asteroids?

Identify asteroids more remote dynamically that
may be geochemically related. This does not necessarily mean compositionally
identical, but would embrace metallic core fragments with asteroids consisting
of mantle material.

The mechanics of collisional fragmentation and disruption must be understood.

Flybys of many members of a particular family would reveal cratering records
which could be used to determine relative (absolute?) ages of family members,
identifying multigenerational collisional fragementation histories. Flybys can
also determine mass densities and help determine whether they are primordial or
arise from collisional history.

Q: Can cratering counts be used to date asteroid surfaces in years
before present?

This requires an Understanding of compositional variations within
protoplanetary objects and what it says about the planet formation process and
early protoplanetary evolution (e.g., due to heating). This can be accomplished
by studying individual protoplanets [rendezvous missions] and by piecing
protoplanets back together from their identifiable fragments.

Multiple sample returns from family fragments showing spectral variations
may provide important detailed geochemical information about the formation and
internal evolution of the parent body prior to disruption. This might be
accomplished to a more limited extent by multiple rendezvous to family
fragments.

Q: Do we know anything about the uniformity of the impactor population
throughout the asteroid belt as a function of time? To address this,
question we might have to launch a flotilla of flyby missions to a range of
asteroid sizes (ages) and heliocentric distances.

Q: Can meteorites be grouped by potential origin from common protoplanetary
parent bodies?

IV. MAINTAINING CAPABILITIES FOR THE FUTURE

The Key Scientific Questions for main belt asteroid studies are not going to
be conclusively answered over the next decade. To ensure that the capacity to
address these questions is maintained, requires strong and steady support for
the underlying R&A programs which serve both to address these question
directly while creating the necessary basis for future asteroid missions.

Data associated with asteroid studies is archived by the NASA Planetary Data
System. The data is peer reviewed as part of the ingestion process to ensure
quality, consistency, and adequate documentation. To maximize usefulness of
this data requires the creation of an interface which would allow researchers
to identify desired data. This might include a listing of all holdings regarding
a particular object, or the identification of those objects meeting SQL
criterion across all asteroid data sets.