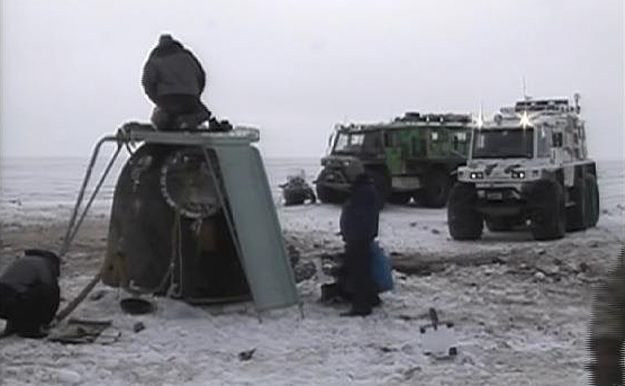 Expedition 34 Commander Kevin Ford and Flight Engineers Evgeny Tarelkin and Oleg Novitskiy landed their Soyuz TMA-06M spacecraft in the steppe of Kazakhstan, northeast of the remote town of Arkalyk Friday evening. Despite fog, low visibility and below freezing temperatures Russian recovery teams were on hand to help the crew exit the Soyuz vehicle and adjust to gravity after 144 days in space.

The trio launched aboard the Soyuz TMA-06M spacecraft from the Baikonur Cosmodrome in Kazakhstan in October and spent 142 days living and working aboard the International Space Station.

Novitskiy was at the controls of the spacecraft as it undocked at 7:43 p.m. from the Poisk Mini-Research Module 2.

Hadfield, Marshburn and Romanenko will remain aboard the orbiting complex as a three-person crew until the March 28 launch and docking of Expedition 35 Flight Engineers Chris Cassidy, Pavel Vinogradov and Alexander Misurkin.