The Venus Amateur Observing Project (VAOP) is an opportunity to contribute scientifically useful images and data to complement the Venus Express (VEX) spacecraft observations of Venus. The project will focus on utilising the capabilities of advanced amateurs to obtain images of the atmosphere of Venus; specifically filtered monochrome images obtained with CCD based cameras in the 350nm to 1000nm (near ultraviolet, visible and near infrared range).

The Venus Express (VEX) spacecraft will observe the planet Venus using seven instruments for at least two Venusian years (1000 days) beginning in May 2006. The instrument package includes the Venus Imaging Camera (VMC), which will image the planet in the near-UV, visible and near-IR range. Although VMC will provide much higher resolution images of the planet than visible from Earth, continuous monitoring of the planet will not be possible.

There may be periods, therefore, when parts of the planet are visible from Earth that are not visible from the spacecraft (due to the spacecraft position in orbit). Additionally it is important to compare Earth-based observations with simultaneous spacecraft observations. In particular this will allow us to extend our understanding of the dynamics of Venus’s atmosphere based on the VEX data to observations made prior to the VEX mission, as well as after completion of VEX operations.

The objectives of VAOP is to obtain high quality images of Venus before, after and during VEX operations. Amateur astronomers, using CCD based cameras with filters for specific band passes in the near ultra-violet, visible and near infrared wavelengths (350nm to 1000nm), are encouraged to participate in the gathering of images. Observation campaigns will include:

Please use the Contact link in the page footer

The following are suggestions for the type of equipment required to make useful observations as part of the programme.

A high quality telescope at least 8″ (20 cm) in aperture is required, especially for UV-filter imaging. This can be of any optical design, although good results have been obtained with commercial Schmidt-Cassegrain and long focal length Newtonian telescopes. For telescopes with glass lens or windows (refractors and SCT’s) some attention should be paid to the type of glass used in the lens, since this may result in significant attenuation in the UV part of the spectrum. This is also true for other glass elements in the optical train, such as Barlow lens.

Images can be acquired using either a high-quality monochrome CCD camera or a monochrome digital video camera (e.g. based on webcam technology). Colour CCD cameras / video is not suitable for this project since this limits the possibility to perform meaningful filtered images, particularly in the near-UV regions. Some examples of camera’s successfully employed for Venus imaging include:

To perform worthwhile imaging of Venus a core set of three filters are required:

In the case of non-standard infrared filters the cut-on wavelength and / or pass band should be noted) Filters should ideally be photometric quality, i.e. without significant infrared leakage for the filters in the UV/visible filters. In any case the specifications (manufacturer, product number should be noted with all observations). The following filters are also useful to expand imaging possibilities:

Venus is very bright, which permits very short exposures to be made in the visible & near infrared wavelengths with most telescope / CCD combinations. In the near UV, the combination of reduced CCD sensitivity and attenuation by the Earth’s atmosphere requires longer time exposures. Nevertheless, exposures in the UV are typically less than 100ms for typical f-ratio used for planetary imaging.

Alternatively, the actual image scale can be measured from the image (e.g. by dividing the number of pixels the planet takes up on the screen by the angular diameter of the planet). Typically to achieve the necessary image scale (generally between f/20 to f/40) a 2x to 3x telenegative Barlow lens is required.

The image exposure should be adjusted to ensure a good dynamic range, without saturating the image. The optimal settings for each filter combination will need to be determined experimentally and will vary depending on conditions (for example transparency). For example with a 235mm SCT at f/35 an ATK-1HS camera at 10fps required 1/25s exposure for U-band, and 1/250s for V-band images.

Prior to making routine observations the imaging setup for Venus observations should be optimised by experimenting with camera settings, filter combinations and focal ratio.

Key details of images must be recorded for the data to be useable. Therefore an observing log should be kept which records the following data:

Although many observers do not routinely perform dark & flat field correction to planetary images, the validity of images is improved using this method especially when faint atmosphere features are detected. Dark fields should be taken using the same exposure settings as for actual images, but with the optics covered to prevent light reaching the camera. For the exposures likely to be used for most Venus imaging dark current is unlikely to be a significant concept except for UV imaging where higher gain settings and longer exposures are necessary.

Flat fields should be taken at approximately 2/3 the linear range of the detector chip. Flat fields can be taken either of the daytime sky, a white screen held over the telescope aperture or the inside of a telescope dome.

Image processing can be performed with a variety of freeware and commercial software applications. For digital video data the freeware Registax (http://registax.astronomy.net/) is a highly recommended tool for processing, since this permits automated selection, stacking & post processing of images. Additionally, dark & flat field images can be automatically subtracted from the video stream.

Image processing should include selection of sharp individual frames from video, followed by alignment & stacking of individual images to reduce noise. Generally post processing using wavelets or unsharp masking is required to reveal fine detail. However, care should be taken during processing to prevent introduction of processing artifacts. 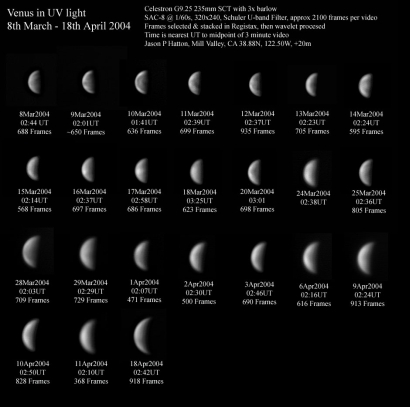 An example of routine monitoring of Venus, with images taken at approximately the same time of day between the 8 March & 18 April 2004. Changing cloud structure is apparent on the planet. The resolution of individual images varies from day to day due to differences in the seeing conditions (atmospheric turbulence). Over the course of the 6 week observing period the phase and apparent diameter of the planet changed significantly. All images by Jason Hatton (jason.hattonesa.int) 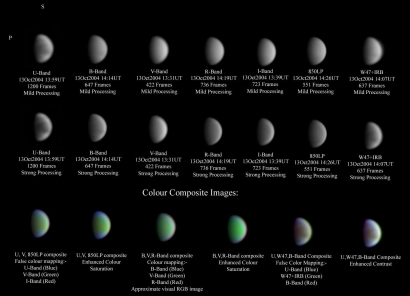 A set of images showing the changing appearance of Venus at different wavelengths. Both the U-band (ultraviolet) and W47+Infrared blocking (violet) images show cloud structure, which is most apparent in the ultra-violet images. In contrast the planet was largely featureless in the visible and near infrared images. All images obtained by Jason Hatton using a 235mm SCT from Mill Valley, California (jason.hattonesa.int) 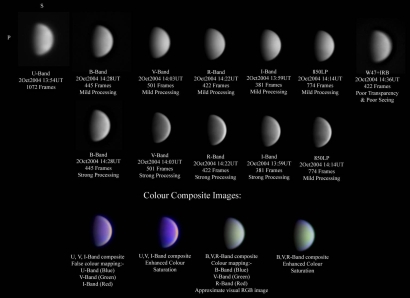 Routine monitoring is important to detect unusual features. In this set of images, a faint dusky marking in the northern hemisphere is detectable in the infrared (most prominent in the strongly processed 850LP image). Several other observers detected similar features in the infrared around the same time. All images obtained by Jason Hatton using a 235mm SCT from Mill Valley, California (jason.hattonesa.int)

Final processed images should be submitted to the Venus coordinator of British Astronomical Association. The current coordinator for the BAA Venus section is Dr Richard McKim and images can be submitted by email to: Rmckim5374aol.com

Generally the BAA is accepting high quality JPEG images, with either annotation of details of the observation on the image or in an attached file. This should include the following information:

To facilitate use of the images by the VEX team it is also preferable to have images in FITS format with all image details recorded in the FITS header.

Routine observations of Venus are needed throughout the period that VEX is observing the planet, as well as after completion of the mission. Since Venus has a high surface brightness it is potentially observable anytime it is far enough from the Sun to be safely observed. Here is a list of Venus apparitions from 2006 to 2011.

The website of Damian Peach (an experienced planetary imager) http://www.damianpeach.com/

The website of Christophe Pellier (the first amateur astronomer to detect the 1?m emission from the night side of Venus). There is an excellent introduction (in French) to planetary imaging on this website http://www.astrosurf.org/pellier/

A news article describing Chris Pellier’s observation of the 1?m emission from the night side of Venus http://skyandtelescope.com/news/article_1266_1.asp