This animation, made from images taken by the Advanced Moon Imaging Experiment (AMIE) on board ESA’s SMART-1 spacecraft, shows a feature characterised by bright albedo, and called Reiner Gamma Formation.

The Reiner Gamma Formation, a totally flat area consisting of much brighter material than the surrounding dark ‘mare’, is centred on an area located at 57.8° West, 8.1° North, in the Oceanus Procellarum on the near (visible) side of the Moon, and has an extension of approximately 30 by 60 kilometres.

The AMIE camera obtained the images on 14 January 2006, from a distance between 1599 and 1688 kilometres and with a ground resolution between 144 and 153 metres per pixel. 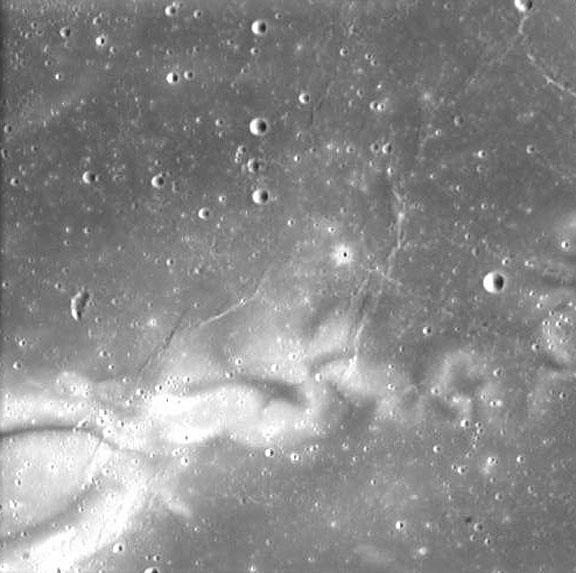 From early ground-based observations, this feature was initially misidentified as a crater. Only later detailed observations from orbit (such as those performed by USSR’s Zond-6, and NASA’s Lunar Orbiter, Apollo and Clementine missions) revealed its true nature: a very unusual morphology, consisting of swirl-like patterns that do not correspond to any topographic features.

Its main part consists of a bright pattern of elliptical shape, located to the west of Reiner crater. Bright elongated patches extend to the northeast in the Marius Hills region and small swirls extend to the southwest. The origin of the Reiner Gamma Formation and other swirls occurring on the lunar surface is still unclear.

Lunar swirls are associated with magnetic anomalies and some of these swirls – such as Mare Ingenii and Mare Marginis – are ‘antipodal’ to large impact structures (that is they are located right into opposite regions of the Moon globe).

So, it was suggested that the Reiner Gamma swirls correspond to magnetised materials in the crust or iron-rich ejecta materials able to deflect the solar wind (constant flow of charged particles coming from the Sun). This would prevent surface materials to undergo maturation processes, and so produce an optical anomaly.

However, Reiner Gamma Formation still stands as a particular case. In fact, the magnetic anomaly does not correlate with the scale of the lunar crust structure and large-scale anomalies seen on the far side. Furthermore, the anomaly is not associated with any obvious antipodal basin structure, and the surface material related to Reiner Gamma appears optically very immature (the age for its emplacement could be quite recent).

The analysis of NASA’s Clementine imaging data showed that the optical and spectroscopic properties of the local regolithic surface layer are close to those of immature mare crater-like soils. This is consistent with the properties of a shallow subsurface mare soil layer.

Considerations from works on impact cratering support the hypothesis that the uppermost part of the regolith could have been modified through an interaction with falling fragments of a low-density comet nucleus, previously broken by tidal forces and having ploughed the regolith.

Then, the magnetic anomaly would not be the result of an antipodal crustal field generated in the formation process of large impact basins. It would rather arise from local effects during the interaction between the lunar surface and cometary physical environment, with the possibility that the solar wind is locally deflected and contributes to the unusual optical properties.

So, the Reiner Gamma Formation could be an interesting site for future human exploration because of the radiation deflected from the surface. Further testing of this hypothesis requires access to the physical properties of the surface to constrain the mechanisms of formation of the lunar swirls. This is an ongoing task for the AMIE camera, aimed at studying regolith photometric properties.

For considerations on the characteristics of the Reiner Gamma Formation, this articles make reference to a paper by P. Pinet, V. Shevchenko, S. Chevrel, Y. Daydou, C. Rosemberg , titled “Local and regional lunar regolith characteristics at Reiner Gamma Formation: Optical and spectroscopic properties from Clementine and earth-based data”, and published in 2000 in the JGR Planets scientific journal (105 (E4), 9457-9475).