This image of the Arsia Mons shield volcano was taken by the High Resolution Stereo Camera (HRSC) on board ESA’s Mars Express.

This image shows a spectacular zone of collapse features on the southern flank of the giant shield volcano Arsia Mons (located at 239°E longitude and 10°S latitude, see the Mars map image). 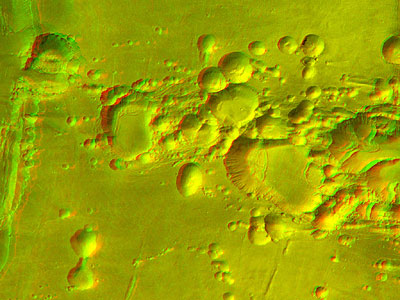 The image was taken from an altitude of about 400 kilometres during orbit 263 of the Mars Express spacecraft.

The original image resolution was 20 metres per pixel, but the versions shown here have been reprocessed to reduce the volume of data for use on the internet. 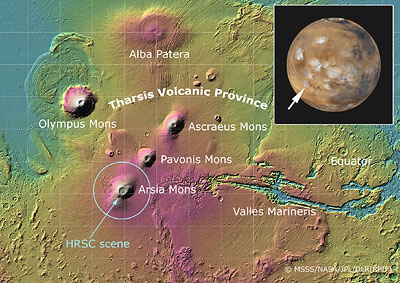 The total height difference in the land surfaces in these scenes is about 7 kilometres, and some individual collapse pits have a depth of 2 kilometres.

The pits probably formed when lava erupted from the side of Arsia Mons. When lava, or molten rock, finds its way to the surface, it produces several veins and chambers. These slowly empty as the lava erupts and runs down the volcano flanks.

Some of the lava reaching the surface cools down and becomes solid, often building a roof over the emptied chamber. The resulting voids collapse due to the weight of the overlying material. At several places, the walls of the pits have been modified by later landslides.

The overall trend of the collapse zone runs from the south-west to the north-east, following exactly a giant zone of crustal weakness in the Tharsis region, along which the three large volcanoes Arsia, Pavonis and Ascraeus Montes are aligned. 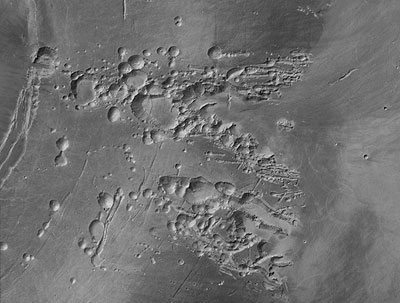 The 3D images require stereoscopic glasses to view. For more information on Mars Express HRSC images, you might like to read our updated ‘Frequently Asked Questions‘.