The National Oceanic and Atmospheric Administration’s (NOAA) process for updating its flyout charts involves obtaining updated information on the health of operational satellites and schedules for new satellites, having relevant individuals review the updated charts, and obtaining approval from a senior NOAA official to publish the charts. This process is partially documented in a 2011 draft policy. NOAA updated the geostationary and polar-orbiting flyout charts three times between March 2014 and January 2016. Key changes included adding newly planned satellites; removing a satellite that reached the end of its life; and adjusting planned dates for when satellites would launch, begin operations, and reach the end of their lives. For example, in one set of changes between April 2015 and January 2016, NOAA extended the life of older polar orbiting satellites by 1 year, added a new fuel limited life period to its most recently launched satellite (called S-NPP), and changed the launch date and the end-of-life date for another satellite (called JPSS-2), as shown below. 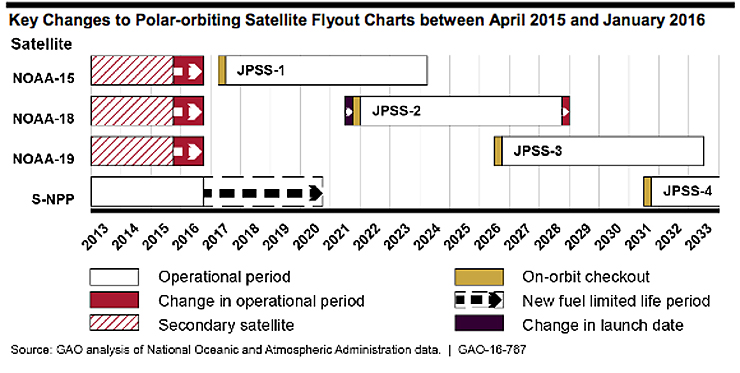 While NOAA has regularly updated its flyout charts and most of the data on specific satellites were aligned with supporting program documents, it has not consistently ensured that the data were supported by stringent analysis, consistent with underlying program data, clearly communicated, and fully documented. For example, unlike the Air Force, NOAA does not require regular availability assessments for its satellite programs. Also, NOAA’s flyout chart updates are not always accurate and consistent with program schedules and polar availability assessments. Further, NOAA does not fully document its changes to the charts. For example, GAO’s assessment of 27 key changes between March 2014 and January 2016 showed that 9 were justified in NOAA documentation and 18 were not. Part of the reason for these issues is that NOAA has not established a clear policy to standardize its approach. Until NOAA addresses the shortfalls in its practices and revises and finalizes its draft policy to help ensure the charts are accurate, consistent, and well documented, it runs an increased risk that its flyout charts will be misleading to Congress and may lead to less-than-optimal decisions.

NOAA manages two weather satellite programs that provide critical environmental data used in weather forecasts and warnings: a geostationary and a polar-orbiting satellite program. The agency is acquiring the next generation of satellites to replace existing satellites that are approaching the end of their expected lives. NOAA regularly publishes timelines, called flyout charts, depicting its expectations for how long its operational satellites will last and when it plans to launch new satellites. These charts are used to support budget requests, provide status reports, facilitate appropriations discussions with congressional committees, and inform the public.

GAO was asked to review NOAA’s recent flyout charts. GAO’s objectives were to (1) describe NOAA’s process for updating its satellite flyout charts; (2) identify changes NOAA has made to its flyout charts in recent years and the justification for those changes; and (3) assess NOAA’s recent efforts to update its flyout charts. To do so, GAO reviewed agency policies and procedures for updating its charts; analyzed changes made to the charts since March 2014; and compared NOAA’s approach to Air Force practices, internal control standards, and program documentation.

GAO recommends that NOAA take steps to improve the accuracy and consistency of its flyout charts, and to revise and finalize the draft policy for updating its flyout charts to address the shortfalls GAO noted. NOAA agreed with GAO’s recommendations and identified plans to implement them.