The amount of electricity generated by the solar panels on Spirit has been declining for the past several Martian days, or sols, as a regional dust storm moved southward and blocked some of the sunshine at Spirit’s location. The team operating the rover has responsively trimmed Spirit’s daily activities and is keeping an eye on weather reports from observations by NASA’s Mars Reconnaissance Orbiter.

Spirit’s solar panels generated 392 watt-hours during the mission’s Sol 2006 (Aug. 24, 2009), down from 744 watt-hours five sols earlier, but still generous compared with the 240 watt-hours per sol that was typical before a series of panel-cleaning events about four months ago.

“We expect that power will improve again as this storm passes, but we will continue to watch this vigilantly,” said JPL’s John Callas, project manager for Spirit and its twin, Opportunity. “Spirit remains power positive with healthy energy margins and charged batteries. The weather prediction from the Mars Color Imager team is that the storm is abating, but skies will remain dusty over Spirit for the next few sols.”

Recent images from the Mars Color Imager camera on Mars Reconnaissance Orbiter showed this regional storm becoming less extensive Monday even as it shifted southward so that its southern edge covered the Gusev Crater area where Spirit is working. Malin Space Science Systems in San Diego, which operates that camera, provides frequent weather updates to the rover team. Weekly reports are posted at http://www.msss.com/msss_images/latest_weather.html .

Meanwhile, in JPL’s In-Situ Instrument Laboratory, the rover team is continuing testing of strategies for getting Spirit out of a patch of soft soil where it is embedded on Mars. On Sol 2005 (Aug. 23, 2009) Spirit used its panoramic camera to examine the nature of how soil at the site has stuck to the rover’s middle wheels. The team has also used Spirit’s rock abrasion tool as a penetrometer to measure physical properties of the soil around Spirit by pressing into the soil with three different levels of force. The team is aiming to start sending drive commands to Spirit in September. 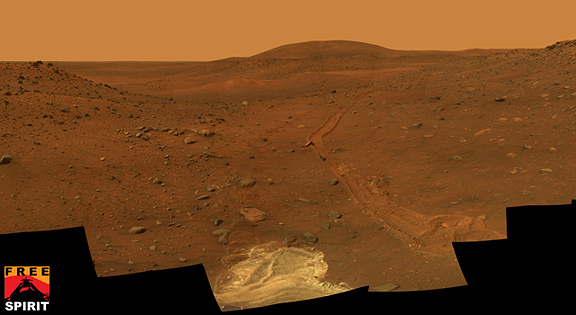 This full-circle view from the panoramic camera (Pancam) on NASA’s Mars Exploration Rover Spirit shows the terrain surrounding the location called “Troy,” where Spirit became embedded in soft soil during the spring of 2009. Full image and caption