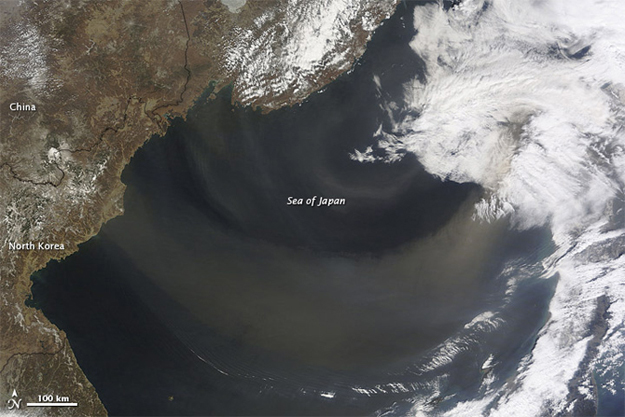 NASA and university scientists have made the first measurement-based estimate of the amount and composition of tiny airborne particles that arrive in the air over North America each year. With a 3-D view of the atmosphere now possible from satellites, the scientists calculated that dust, not pollution, is the main ingredient of these imports.

According to a new analysis of NASA satellite data, 64 million tons of dust, pollution and other particles that have potential climate and human health effects survive a trans-ocean journey to arrive over North America each year. This is nearly as much as the estimated 69 million tons of aerosols produced domestically from natural processes, transportation and industrial sources. The results were published Aug. 2 in the journal Science.

“This first-of-a-kind assessment is a crucial step toward better understanding how these tiny but abundant materials move around the planet and impact climate change and air quality,” says Hongbin Yu, lead author and an atmospheric scientist at the University of Maryland, College Park, and NASA’s Goddard Space Flight Center in Greenbelt, Md.

Observing these microscopic airborne particles and quantifying their global impact on warming or cooling Earth remains one of the most difficult challenges of climate science. Dust and pollution particles rise into the atmosphere and can travel for days across numerous national boundaries before settling to Earth.

Data from several research satellites with advanced observing technology developed and launched by NASA enabled the scientists to distinguish particle types and determine their heights in the atmosphere. They combined that information with wind speed data to estimate the amount of pollution and dust arriving over North America. The scientists used data from instruments on NASA’s Terra satellite and the Cloud-Aerosol Lidar and Infrared Pathfinder Satellite Observations (CALIPSO) satellite, a joint effort between NASA and the French space agency, Centre National d’Etudes Spatiales.

Yu and colleagues estimated that dust crossing the Pacific Ocean accounts for 88 percent, or 56 million tons, of the total particle import to North America every year. Dust movement is particularly active in spring, when the rise of cyclones and strong mid-latitude westerlies boost particle transport across the Pacific. Global aerosol transport models revealed Asia was a primary source of the dust reaching North America. Sixty percent to 70 percent comes from Asia and the remaining 30 percent to 40 percent comes from Africa and the Middle East.

Dust particles are fine pieces of minerals that primarily come from dry, desert-like regions. Winds lift these lightweight particles high into the atmosphere where they meet even faster-moving winds capable of transporting them around the planet. Pollution particles, in contrast, come from combustion sources such as wildfires or agricultural fires and fossil fuel burning for power and industry. These particles are emitted close to the ground, making them of prime interest to air quality researchers and managers. High-altitude dust particles are less a concern for human health, but their impact on climate can be significant.

One such impact on climate is a cooling effect, brought about by dust and some pollution particles that reflect sunlight back to space. The team calculated that the imported particles account for one third of the reduction in solar radiation, or solar dimming, over North America. “Globally this can mask some of the warming we expect from greenhouse gases,” says Lorraine Remer, an atmospheric scientist at University of Maryland, Baltimore County, and co-author on the study.

Climate change brought about by greenhouse gases could influence the relevance of dust in the future, according to Remer. “Desertification and reclamation, the land use modifications that change the exposure of dusty soils to wind erosion, are going to have a big impact on particle distribution and climate around the planet,” she says.

The study poses new questions about the magnitude of the particles’ indirect effects on local weather and climate. Dust and pollution could alter wind circulation, foster cloud growth and affect rainfall patterns. Soot and dust particles that land on snow, most likely in the western United States, could speed the melt of the snowpack and affect water supplies.

To see a video and images related to this study, visit: http://www.nasa.gov/topics/earth/features/dust-imports.html