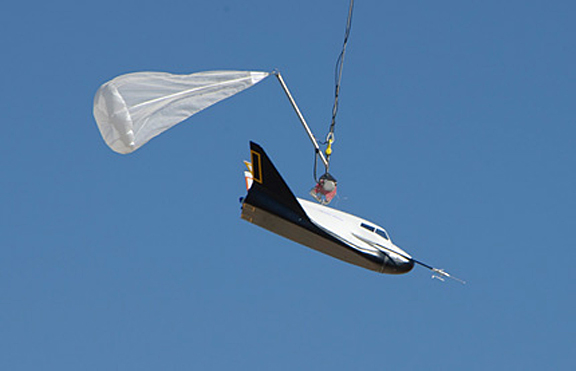 The company’s planned full-size Dream Chaser vehicle, based on the NASA HL-20 lifting body, is designed to carry up to seven people to the International Space Station and back. The vehicle is slated to launch vertically on an Atlas V rocket and land horizontally on conventional runways.

“Working with the SNC/CU team was a privilege. Their teamwork and dedication were phenomenal, especially through a very dynamic, tiring week of testing,” said Jonathan Pickrel, NASA Dryden’s flight operations engineer overseeing the testing.

The captive carry and drop flights of the 88-pound model helped validate various aspects of the Dream Chaser vehicle’s configuration and performance, such as flight stability and aerodynamic data for flight control surface deflections.

“Working with NASA Dryden has always been a pleasure for me personally,” said Dr. Merri Sanchez, Senior Director for Space Exploration Systems at SNC. “Sierra Nevada appreciates the excellent operational support, flexibility and flight test expertise from the NASA Dryden and Air Force teams during the conduct of our scale model test flights,” Sanchez said. “We’re leveraging the NASA HL-20 heritage design with our Dream Chaser vehicle that we are building to meet our Nation’s need for a commercial crew transportation system, and it’s great that our first subscale flight was at this NASA center.”

Sierra Nevada contracted with Northwest Helicopter for the Bell 206B3 Jet Ranger helicopter that carried the Dream Chaser model on a 100-ft. cable. The helicopter dropped the model from an altitude of 14,000-feet, with landing via parachute. The model was designed, built, and operated from a collaboration between SNC and the Research and Engineering Center for Unmanned Vehicles at the University of Colorado at Boulder (CU).

NASA selected Sierra Nevada Corp. in Feb. 2010 to begin development of commercial crew transportation system to and from low earth orbit as part of NASA’s Commercial Crew Development initiative and competition. It is part of an innovative effort by NASA to foster entrepreneurial activity leading to high tech growth in engineering, analysis, design and research and to promote economic growth.