McMurdo is part frontier town and part science lab. A delightful place that somehow attracts explorers, scientists, and misfits that need some form of temporary escape from the inherent organization of our civilized places back home.

My first impression is something from a B-grade western set in some obscure mining town, where life centers around one main street paved with ankle deep mud and rimmed by board sidewalks. Life in McMurdo seems to also center around the main street, filled with a mix of pedestrians, mud-caked dump trucks, loaders, various cleated tractor conveyances, and Mongo trucks with tires that truly look like a jolly fat Michelin Man. These trucks look like they are fed a mixture of gasoline and steroids. The streets in McMurdo are paved with mud, a coarse mixture derived from volcanic sediments, which remain frozen hard in the shade and slush in the sun. If you do not watch your step, you can easily sink in over the tops of your hiking shoes. Yes, this place is like a B-grade western except there are no board sidewalks.

Before one is dropped off in the middle of this continent for six weeks of living in a Scott tent, it is wise to make certain your team knows how to deal with the necessities of camping. Thus, we went on a short training trip where we loaded up our snow mobiles, loaded up our sledges, and drove off from McMurdo towards the foot hill of Mount Erebus. Mount Erebus is not only the highest mountain on the continent; it is also an active volcano. We were close enough to see a pale blue plume of smoke waving over the summit like some sort of a flag proclaiming, “Don’t Tread On Me.” 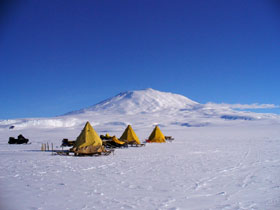 Image at right: Training camp set up on the foot hills of Mt. Erebus near McMurdo Station. Credit: Don Pettit

We set up our Scott tents just like we had been shown by our resident mountaineers. We have two well-seasoned mountaineers along, whose function is to seemingly train us and to help out on the expedition but who are really there to baby-sit us scientist types so that we can accomplish our mission work and come out in one piece. If you are a scientist living in the Antarctic interior for the first time, it is good to have along a mountaineer or two. These people are rich in common sense experience, the kind that keeps one alive in a harsh and unfamiliar environment. If you listen and watch, not only will you learn something new, you will learn to be comfortable and safe in this clime. For two days our team was kept busy on this shake down trip, learning the ropes of setting up camp, glacier traverse, and if necessary, crevasse rescue.