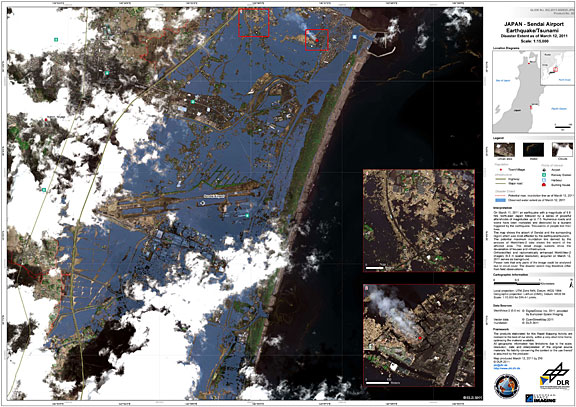 An earthquake of magnitude 8.8 hit north-east Japan followed by a series of powerful aftershocks and Tsunamis. The epicentre of the earthquake is located 400 km away from the capital Tokyo at a depth of 32 km. The earthquake occurred at 14:46 local time (05:46 GMT) on March 11. The areas most affected are the prefectures of Miyagi, Fukushima, and Iwate. The town of Sendai was severely affected and a tsunami of more than 10 m height hit the coastline. Massive surges of debris-filled water sweeped away buildings, cars and ships and were reaching far inland. Fires occurred in several cities, and nuclear power plants, refineries, airports, and parts of the transport networks were shut down. Larger images and data files