When we awoke this morning there was no fog, but a low ceiling, and the word from camp was that Twin Otter
flights could not be scheduled under these conditions. But around 9 AM we got a radio call from John Schutt
informing us that First Air was going to give it a try, and that we should be at the landing strip with all
our stuff in 45 minutes. Knowing that any lucky break in the weather would be brief, we had been packed and
ready to go for the previous 24 hours, and were able to respond immediately.


We started passing duffel bags and packs down from the upper deck. As we did so, Pascal came zipping up out of camp on an ATV, accompanied by an Inuk lad driving another ATV pulling a small trailer. As the trailer was loaded, I gave Pascal a quick tour of the hab, briefing him on its current status, showing him where various key items had been stowed, and clueing him on the minor quirks that had developed with various pieces of equipment.


Then we were off to the airstrip. I had Christine riding on the back of my ATV, and we made the trip down the ridge to the Lowell Canal quickly. The stream looked low, but I did not want to be caught in mud. So I increased speed to try to quickly cross at a particularly shallow-looking spot, and instantly submerged the ATV in two feet of ice-cold water. The engine stalled out, and for a moment it seemed as if Devon Island was going to get in one last shot at complicating our plans. Fortunately I was able to restart the engine , and we got to camp with refreshed feet but little else worse for wear.


The whole camp turned out to see us off. Charles and Brent had decided to stay on to do some science activities out of base camp for a few more days, and John was remaining to serve as part of the crew of rotation four, so the people leaving on the Otter were Christine, Cathrine, and I, plus Brian Glass, a researcher with the NASA Haughton Mars Project (HMP). I turned over command of the station to Pascal, and sharing a warm handshake, wished him well on his upcoming rotations. Then we climbed into the Otter, and buckled into our seats. A minute later we were airborne. We got one last look of base camp and the hab, then we were above the clouds and Devon Island was gone. 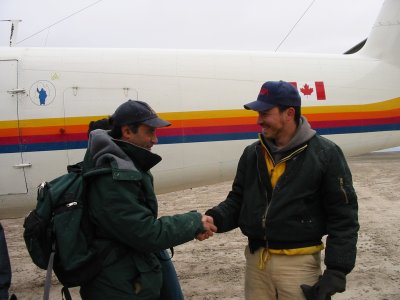 When we reached Resolute Bay, we were greeted by Colleen Lenahan, a graduate student from Nova Scotia who is serving as HMP and Mars Society logistics coordinator, and Aziz Kheraj (pronounced the way the French say “courage”), the owner of the South Camp Inn. I can say without fear of contradiction that this latter establishment is without question the finest hotel in Resolute Bay. I know Aziz well. He served as our volunteer logistics coordinator during the crisis last year, and his ingenuity in scrounging things that others thought impossible to find played a critical role in our success in building the station after the crane and trailer were destroyed in the failed paradrop and the paid construction crew deserted.


Aziz invited us to come over to his place to hang out during the 5 hours we had to burn before the 737’s scheduled departure for Yellowknife. So together with his kids and his magnificent (and mischievous) snow-white German Shepherd Nanook, we piled into his van and headed for the hotel.


It was a strange feeling riding in a vehicle, instead of on one. But Nanook did his best to welcome us to this new environment. Either that, or he enjoyed our smell. One of the two.


But it was at the hotel that the shock of re-entry into civilization began. Once you pass the mud room foyer of the South Camp Inn, you enter this weird world where there are nicely carpeted floors, cushioned easy chairs, televisions, and flush toilets. There is a dining room containing a pot filled with real coffee, a bowl of fresh cut melons, and a cauldron of hot beef stew with actual chunks of recently cooked beef in it. But most strange and wonderful of all, there are hot showers. I spent five minutes savoring mine (well, maybe ten), and the gals did the same.


After we had showered and lunched, I spent some time talking to Cathrine. She is very fired up about her experience as a member of the Flashline Station crew, and is anxious to do more once she returns to Denmark. What can she do that will matter? I tell her. The Mars Society wants to establish a European Mars Arctic Research Station. We need it to expand the quantity and variety of our research, and to wake Europe up to the challenge of Mars. The station will be in either Iceland, Norway, Sweden, or Finland. We have members in all of those countries, but they need to be pulled together to form a strong Scandinavian chapter that can mount a search to find the best location for the base. She needs to take responsibility to make that happen.


Cathrine smiled her mile-wide smile. She is up for the challenge.


(By the way, did I mention Cathrine finished reading “First Landing?” She wrote a five-star review of it for Amazon, “from a reader on Devon Island.” Now that’s what I call a good crew member!)


At 3:30 we went down to the airport to greet the incoming 737. There we met Sally Silverstone, newly arrived to replace Mark Webb as HMP camp cook, and Jaret Mathews, a Purdue University engineering student who will serve as a member of the Flashline Station’s crew during rotation 5. Then we boarded the jet, and left the high Arctic. 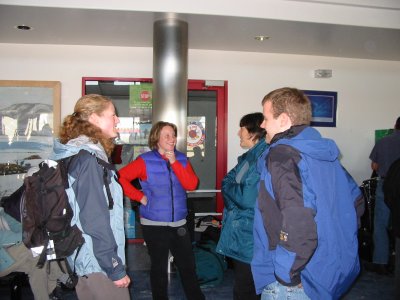 The trip to Yellowknife was uneventful. But upon landing in Edmonton we were greeted by a thunderstorm that prevented us from leaving the plane for two hours – a final notice from the whimsical goddess Meteora making clear who is boss in Canada. Then she allowed us to escape the aircraft, and we entered the amazing throngs of Edmonton Airport. 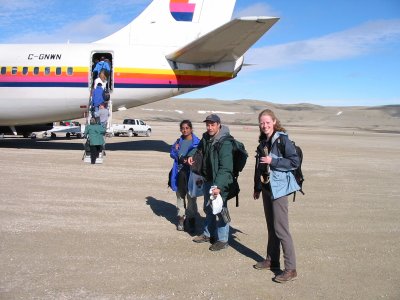 After picking up our baggage, it was time to take leave of my last two crewmates. They were going to the Leduc, I to the Nisku. The Nisku van arrived too soon. I gave Cathrine and Christine each a heartfelt farewell hug. You can make good friends on Devon Island.


Now I am in Edmonton, and will be back home with my wife Maggie, and daughters Sarah and Rachel tomorrow. So this will be my last column. I’d like to close it by taking stock.


I’m dog-tired, but I’m feeling great. We accomplished a lot this summer. In our first Mars mission simulation we demonstrated in dramatic fashion the overwhelming value of human explorers on Mars. Under Mars mission simulation conditions, we did broad-ranging field surveys, crossing or climbing over very tough terrain. We found stromatolites and cyanobacteria, and we deployed seismic arrays and telerobots. These are all essential activities for Mars exploration, and none of them would have been possible using strictly robotic means. We showed that a Mars crew could operate without cost to morale with a water ration less than half that assumed by NASA. This will have a powerful result in reducing the mass, and thus the price, of a human Mars mission. We learnt an immense amount that will help us refine the simulation for next year. We reached tens, perhaps hundreds of millions of people through the media that came up to cover us. In short, we did it all: We stayed safe, we maintained the sim, we did science, we spread the word, we had fun, and we made friendships that will last a life time.


To me, this whole project has been an incredible experience. People have been talking about establishing a simulated human Mars exploration base for at least 20 years; we finally made it happen. It was done through the efforts of Mars Society volunteers, not just those who served in the crew, but hundreds of others. It was Mars Society volunteers who first developed the plans for the station, who raised or contributed the money, who helped publicize the project, who went in to get the fabrication work done at the factory, who pitched in building the hab on Devon last year when the chips were down, who worked out the mission communication protocols, who designed and sewed the spacesuits and soldered their packs, who helped with the planning and logistics, who manned Mission Support and our public outreach portal at Kennedy Space Center. Still more volunteers, right now, are working to create analog pressurized rovers that will take to the field as part of our Mars Desert Research Station when it becomes active this fall. There have been so many people who have helped that I cannot thank them all.


Together we will do ever greater things.