The weather today was fair, with the prospect for better tomorrow and Tuesday. So we decided to
seize the time to perform a reconnaissance EVA to try to find the best site for Vladimir’s
geophone flute seismic sounding experiment. The crew was Vladimir, Katy, and I, and our target
area to survey was the Von Braun Planitia, a large flat expanse stretching north from the hills
overlooking the Lowell Canal.


Our method of transport was ATV’s. It’s hard to hike far in a spacesuit, so Mars explorers will need to use motorized vehicles. In most past studies, the assumed method of travel was either a two-person unpressurized go-cart, similar to the Apollo Lunar rovers, or pressurized vehicles ranging in size from SUV’s to minivans or even school buses.


I still believe that small-end pressurized rovers, which can enable multi-day field trips far away from base, will be an essential part of Mars exploration. But lose the lunar go-cart. For exploration within a few hours ride of either the base or the pressurized rover, what are needed are light, agile, single person equestrian vehicles like our ATV’s. Ever since my first trip to the Arctic two years ago, I have been a convert. Using an ATV, a rider can travel rapidly long distances over unimproved terrain, crossing fields of small boulders, climbing or descending steep rocky slopes – whatever. And the single-rider nature of the vehicle lends a very informal and therefore productive quality to the mobility. You don’t need to negotiate with anyone to decide which way to go. If you see a nearby object of possible interest, an apparent fossil, for example, you can just steer over to it, reach down, pick it up, keep it or toss it. Of course, since every EVA involves at least two people, you will have at least two ATV’s on every sortie. Since in a pinch an ATV can actually carry a passenger behind the driver, such an EVA mobility system is very robust. 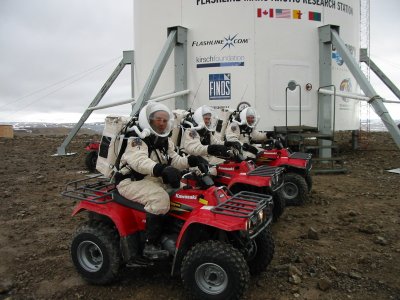 Now ATV’s are like horses; there is a great variation between what different people can manage to do with them depending upon their level of experience, training, and natural aptitude. So if we are to use ATV equivalents on Mars, we will not only have to design spacesuits and other gear to be compatible with them, we will have to choose and train our crews accordingly as well. Inuit might make the best crew trainers. There are none better on ATVs. 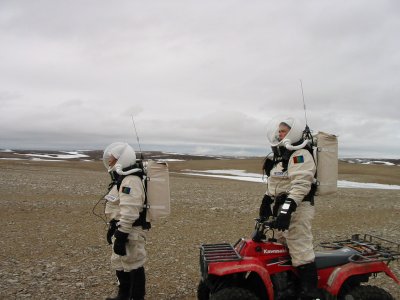 Like the American west, Mars will be explored in the saddle.


So saddle up we did, and set course for Von Braun. To get there, we had to descend from Haynes Ridges, cross the Lowell Canal, which was running fast this morning with crystal clear ice-cold water about 18 inches deep. Then we forded more streams and climbed the slopes to reach the plateau. We then drove several miles across the plain, looking for a geophone site. Some of it was quite muddy from all the rain and snow melt that had been inundating the area until recently, and we had to keep the vehicles moving to prevent sinking. Other parts were relatively dry. We were able to make rapid progress traversing to the edge of the planitia, after which we crossed a stream and scaled a rocky ridge. Here the terrain changed into a small canyon system. The area impressed me as being interesting to explore, but not useful for geophone purposes. As we had already been out for over two hours, we decided to head back. 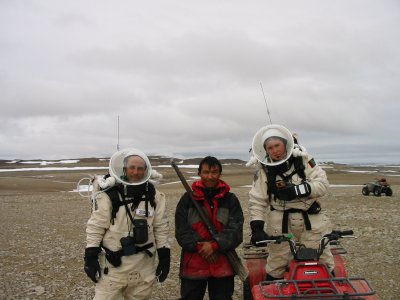 Polar bears have been spotted on Von Braun, and spacesuited crew members on EVA lack the situational awareness required to be safe from them. So on this EVA, as on all others involving travel significant distances from the station, the crew was followed by an armed Inuk from camp. In our case, it was Joe Amaralik. Joe, who also serves as Deputy Camp Manager, is an experienced ranger with many bear kills to his credit. He carries a Lee-Enfield .303.


Upon returning to the hab, we held a general meeting of the crew to discuss the comparative merits of the various sites visited. Our conclusion was to try the site in the crater where two streams meet, about halfway between the station and Trinity Lake. There may not be ground ice there, but at least we will be able to make a useful measurement, sounding down through the breccia left by the meteor impact to determine the depth of the crater floor beneath it.


The weather forecast for tomorrow is good. Our plan is to head down into the crater early, and deploy the geophone twice at the same location; once east-west and the other time north-south. This should give us a full three-dimensional picture of the subsurface. It will also require twice as much work as the single direction scan we did during the geophone EVA on Haynes Ridge several days ago, but I’m hopeful we can pull it off.


There is a shower in the hab, but to save water we don’t all use it every day. Instead, two people take either water-conserving Navy showers or sponge baths every day, which means that each crew member gets to wash every third day. Today was the turn for Bill Clancey and I. We both elected sponge bathes, and averaged about two gallons each. This is much better than the Navy showers, which according to our records average about 6 gallons. We had the water heater on for the occasion, but as I went first, the hot water did not make it down the line in time for me to use. Cold sponge baths are very refreshing. Try one.


I received another letter today via Mission Support from my wife Maggie, telling of more goings on back home in Colorado. Much of it was personal, but she concludes with some insightful remarks that I thought I might share with you. She writes:


“As I stood watching the overwhelming beauty on the mountain, crest after crest rolling off to the west, tree covered and jewel green, and the city of Denver spread out at my feet to the east, shimmering lazy in the Sunday afternoon heat, my thoughts went to you and the crew in the rain and barren cold of Devon Island. The analog to Mars was immediately apparent. I wondered, what will the pioneers think of Earth while they try to carve out their life in the barren, hostile environment of Mars. Some undoubtedly will long for the home world, teeming with life and convenient to live on.


“These folks may resent the conditions imposed upon them by the new world of Mars. But I think they will be the minority. I believe that most of the colonists will remember the beauty of Earth with a sense of pride and inspiration. I believe that they will meet the challenges of the new world with determination to make it a place where humans can thrive.


“For three, maybe four months a year, the beauty of my home is incredible. It is entirely possible to roam about unprotected in the outdoors and live off the land if need be. But for the rest of the year, we huddle in houses or cars or shopping malls, because even now, with all the years we have been working at changing our environment, much of the earth is essentially unlivable for human beings without the aid of technology. Man abides, adapts and appreciates. We will learn to love the canyons and mountain peaks of Mars with the same ardor I bring to my narrative tale of Indian Hills.


Thanks, Maggie. On to Mars.