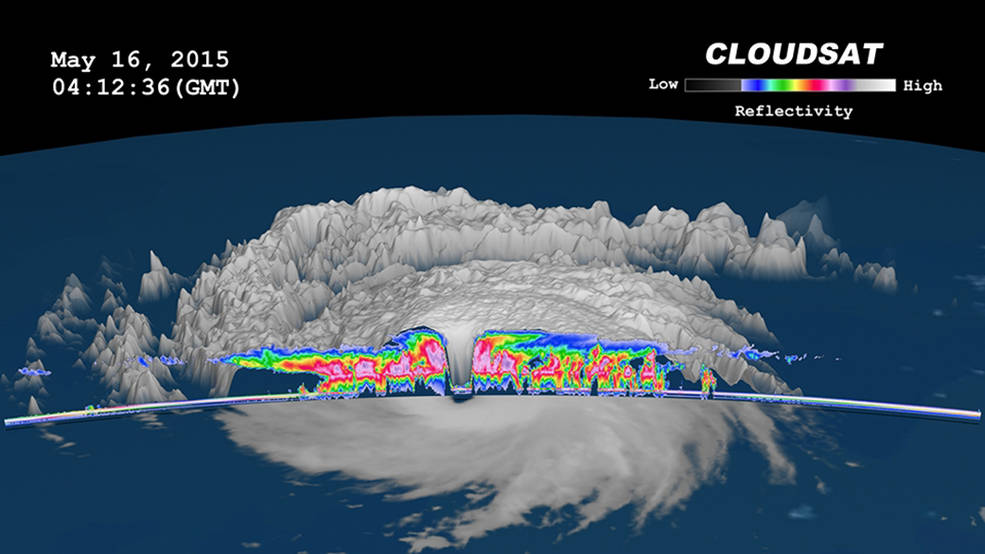 When Dolphin was a typhoon on May 16, NASA’s CloudSat satellite completed a stunning eye overpass of Typhoon Dolphin in the West Pacific at 0412 UTC (12:12 a.m. EDT). By May 22, Dolphin’s remnants were moving through the Northern Pacific.

NASA’s CloudSat satellite sends pulses of microwave energy through the clouds, and some of the energy in the pulses is reflected back to the spacecraft. The time delay between when the pulse is sent and when the reflected energy is received back at the spacecraft is mapped into a distance of the cloud from the surface of the Earth, and the strength of the energy received is related to how much water or ice is contained in the cloud.

The colors used when imagery is created are an indication of the strength of the returned signal, termed the reflectivity. The red and purple areas indicate large amounts of cloud water or precipitation. 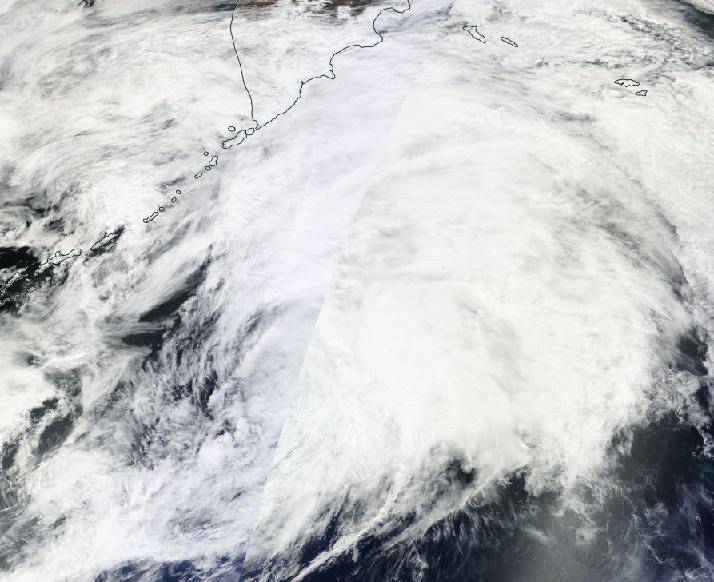 At the time CloudSat passed over the storm, Dolphin’s estimated maximum winds were 125 knots (144 mph) and the storm had a minimum pressure of 934 hPa (equivalent to a category 4 strength hurricane). Dolphin continued rapidly intensifying and in less than 24 hours after the CloudSat overpass, Typhoon Dolphin strengthened into a category 5 strength system, the fifth category 5 system this year.

At Colorado State University, the CloudSat data was combined with infrared imagery taken from Japan’s MTSTAT satellite to create a side view of the storm. CloudSat overpassed directly through the eye of the system detailing the outward sloping eyewall, intense convection and rainfall in the surrounding eyewall and overall cloud structure. This was one of several direct eye overpasses CloudSat has completed during the last nine years in orbit.

Five days later, Dolphin was no more. The MODIS instrument aboard NASA’s Terra satellite captured an image of the remnants of extra-tropical cyclone Dolphin, southeast of Russia’s Kamchatka Peninsula on May 22. Dolphin’s remnants were absorbed by the westerlies (winds) in the Northwestern Pacific Ocean and appeared as an amorphous area of clouds.

For more information about this CloudSat encounter with Typhoon Dolphin, visit:  http://cloudsat.atmos.colostate.edu/news/Typhoon_Dolphin