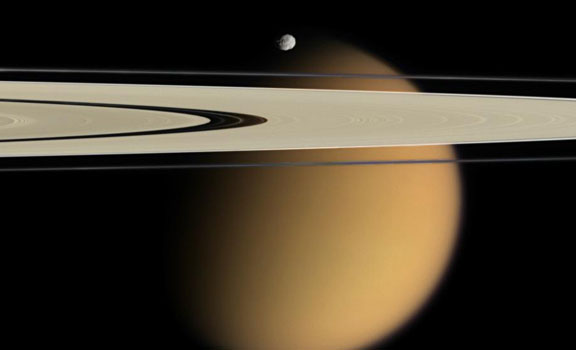 The blurring effects of Titan’s aerosols are obvious in this image, where the orange moon peeks from behind two of Saturn’s rings. Small, battered Epimetheus, another of Saturn’s 62 moons, appears just above the rings. Image credit: NASA/JPL/Space Science Institute. Full image and caption

Every day is a bad-air day on Saturn’s largest moon, Titan. Blanketed by haze far worse than any smog belched out in Los Angeles, Beijing or even Sherlock Holmes’ London, the moon looks like a dirty orange ball. Described once as crude oil without the sulfur, the haze is made of tiny droplets of hydrocarbons with other, more noxious chemicals mixed in. Gunk.

Icky as it may sound, Titan is really the rarest of gems: the only moon in our solar system with an atmosphere worthy of a planet. This atmosphere comes complete with lightning, drizzle and occasionally a big, summer-downpour style of cloud made of methane or ethane-hydrocarbons that are best known for their role in natural gas.

Now, thin, wispy clouds of ice particles, similar to Earth’s cirrus clouds, are being reported by Carrie Anderson and Robert Samuelson at NASA’s Goddard Space Flight Center in Greenbelt, Md. The findings, published this week in the journal Icarus, were made using the composite infrared spectrometer on NASA’s Cassini spacecraft.

Unlike Titan’s brownish haze, the ice clouds have the pearly white appearance of freshly fallen snow. Their existence is the latest clue to the workings of Titan’s intriguing atmosphere and its one-way “cycle” that delivers hydrocarbons and other organic compounds to the ground as precipitation. Those compounds don’t evaporate to replenish the atmosphere, but somehow the supply has not run out yet.

“This is the first time we have been able to get details about these clouds,” says Samuelson, an emeritus scientist at Goddard and the co-author of the paper. “Previously, we had a lot of information about the gases in Titan’s atmosphere but not much about the [high-altitude] clouds.”

Compared to the puffy methane and ethane clouds found before in a lower part of the atmosphere by both ground-based observers and in images taken by Cassini’s imaging science subsystem and visual and infrared mapping spectrometer, these clouds are much thinner and located higher in the atmosphere. “They are very tenuous and very easy to miss,” says Anderson, the paper’s lead author. “The only earlier hints that they existed were faint glimpses that NASA’s Voyager 1 spacecraft caught as it flew by Titan in 1980.”

The full story is online here.

The Cassini-Huygens mission is a cooperative project of NASA, the European Space Agency and the Italian Space Agency. NASA’s Jet Propulsion Laboratory, Pasadena, Calif., a division of the California Institute of Technology in Pasadena, manages the mission for NASA’s Science Mission Directorate, Washington, D.C. The Cassini orbiter and its two onboard cameras were designed, developed and assembled at JPL. The CIRS team is based at NASA’s Goddard Space Flight Center in Greenbelt, Md., where the instrument was built.