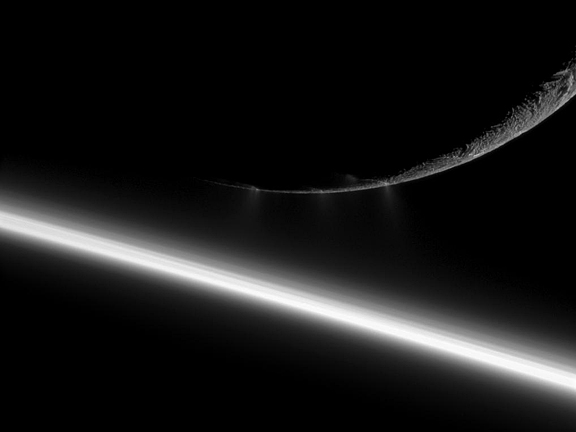 Small water ice particles fly from fissures in the south polar region of Saturn’s moon Enceladus in this image taken during the Aug. 13, 2010, flyby of the moon by NASA’s Cassini spacecraft.

This view looks toward the night side of Saturn, which is in the lower left of the image. Enceladus, in the top right, is closer to the spacecraft than the planet is in this view. Sunlight scatters through the planet’s atmosphere and forms the bright diagonal line running from the left to bottom right of the image. The atmosphere appears layered here. Scientists think the different layers on the limb are real and not an artifact of the camera’s exposure.

The famous jets, imaged by Cassini’s cameras for the first time in 2005, are faintly seen here erupting from the fractures that cross the south polar region of the moon.

Illuminated terrain seen on Enceladus is on the leading hemisphere of the moon, or the side facing forward in the moon’s orbit around Saturn. North on Enceladus (504 kilometers, 313 miles across) is up. The jets appear faint here, but can be seen near the center of the image. See PIA11688 to learn more.

The image was taken in visible light with the Cassini spacecraft narrow-angle camera. The view was obtained at a distance of approximately 59,000 kilometers (37,000 miles) from Enceladus and at a sun-Enceladus-spacecraft, or phase, angle of 155 degrees. Image scale on Enceladus is 353 meters (1,157 feet) per pixel.