By SpaceRef Editor
December 8, 2014
Filed under Center for the Advancement of Science in Space (CASIS), Commerce, US 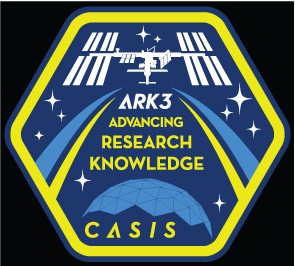 The Center for the Advancement of Science in Space (CASIS) today announced the unveiling of its latest mission patch, designed by actor, creator, and producer Seth Green. The mission patch developed by Green will represent the entire cadre of CASIS investigations destined for the International Space Station (ISS) U.S. National Laboratory in calendar year 2015, otherwise known as Advancing Research Knowledge 3 (ARK3). CASIS is the organization responsible for overseeing research to benefit life on Earth using the ISS U.S. National Laboratory.

ARK3 represents the third calendar year that CASIS-sponsored investigations have been manifested for flight to the ISS National Lab. Additionally, ARK3 symbolizes a significant step forward as CASIS opens new doors to knowledge that can only be gained through microgravity research. In 2015, CASIS anticipates an abundance of research payloads will reach the station. Payloads expected to reach the station include life science investigations such as research to test bone density and muscle loss in space and non-embryonic stem cell studies to gain a better understanding of disease, which may lead to the development of new healthcare treatments and therapies. A number of projects will also be dedicated towards enhancing technologies and materials to demonstrate that the ISS is not only a unique laboratory, but a first-class research platform where investigators can conduct experiments not replicable on Earth. ARK3 represents an orbiting laboratory open to researchers from all across the country leveraging the capabilities of the ISS to benefit humanity.

“I have always been fascinated with space, so it’s been an amazing opportunity to develop a mission patch highlighting the research taking place on the International Space Station. Working on the patch allowsme to demonstrate my enthusiasm for human beings continuing to explore new ways to improve our planet and our way of life,” said actor, creator and producer Seth Green. “It’s been a great experience collaborating with CASIS to better understand their role in making use of this incredible research facility. If my promoting space-based research through this patch in some small way drives additional thoughts and ideas to improve life on Earth, I’m happy to help.”

Seth Green has starred in numerous films and television series including all three Austin Powers films, The Italian Job, Party Monster, Without a Paddle, Can’t Hardly Wait, Old Dogs, and dozens more, including starring roles in 2013’s Sexy Evil Genius, The Story of Luke, and this month’s feature, Yellowbird. Green is the co-creator/executive producer/primary voice talent and a writer/director on RobotChicken, 2010 Emmy® winner for Outstanding Short Format Animation Program. Green has voiced Chris Griffin on Family Guy since the series’ inception and voices A-Bomb on Disney XD’s Marvel’s Hulk and the Agents of S.M.A.S.H. and Leonardo on Nickelodeon’s Teenage Mutant Ninja Turtles. Green and his partners created Stoopid Buddy Stoodios, a full-service animation studio with many other shows and projects in production.

“Part of the role of CASIS is to educate and promote the benefits of ISS research to the public,” said CASIS Director of Marketing and Communications Brian Talbot. “Seth Green has been an outspoken advocate on the need to explore beyond Earth’s horizons for years, and we are excited to have this opportunity to engage him in a fun and meaningful partnership to promote the benefits of conducting research in space.”

To learn more about Seth Green’s vision for development of this mission patch, please view the official ARK3 video: https://www.youtube.com/watch?v=_rJAtFhwtlI&feature=youtu.be