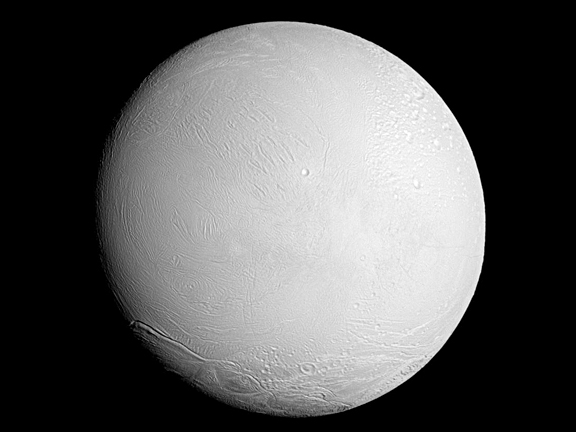 The Cassini spacecraft looks at a brightly illuminated Enceladus and examines the surface of the leading hemisphere of this Saturnian moon. See PIA11688 to learn about the jets of water ice emanating from the moon’s south polar region. North on Enceladus (313 miles across, or 504 kilometers) is up and rotated 21 degrees to the right.

The image was taken in visible light with the Cassini spacecraft narrow-angle camera on Nov. 6, 2011. The view was obtained at a distance of approximately 67,700 miles (109,000 kilometers) from Enceladus and at a Sun-Enceladus-spacecraft, or phase, angle of 21 degrees. Image scale is 2,130 feet (649 meters) per pixel.