By SpaceRef Editor
August 5, 2012
Filed under Earth, polar, The Antarctic Sun, US 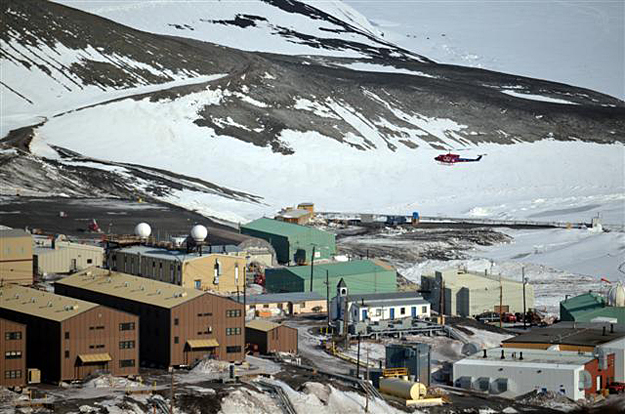 By Peter Rejcek, Antarctic Sun Editor – An independent committee charged with assessing the logistics requirements for the U.S. Antarctic Program (USAP) to support research into the 21st century has urged the National Science Foundation (NSF) and White House to invest heavily in infrastructure improvements over the next five years.

The call to action came during a press conference held at the National Academy of Sciences in Washington, D.C., during which a Blue Ribbon Panel, established by the White House’s Office of Science and Technology Policy (OSTP) and NSF, discussed the results of its report, More and Better Science in Antarctica through Increased Logistical Effectiveness.

In the report, the 12-member panel, chaired by Norm Augustine, former chairman and CEO of Lockheed Martin Corp. who led a similar review of the USAP in the 1990s, identified deficiencies and areas for investment, as well as suggestions on how to pay for improvements in a tough fiscal environment.

“We will take this report extraordinarily seriously and work very hard so that our actions match the drive and goals that were behind producing this report by this distinguished group,” said NSF Director Subra Suresh during the hour-long press conference on July 23.

The Blue Ribbon Panel report on logistics and science support follows a 2011 National Research Council study, Future Science Opportunities in Antarctica and the Southern Ocean, which identified some of the major research goals in Antarctica for the next couple of decades.

That group, chaired by Dr. Warren Zapol at Harvard Medical School, recommended a continued focus on climate change research with the development of an observation network capable of long-term monitoring of ice, ocean and atmospheric processes around Antarctica. [Link to previous article.]

John P. Holdren, director of OSTP, noted that research in Antarctica has already provided valuable scientific discoveries of the region and the planet.

“The work that U.S researchers have conducted in our Antarctic program has generated insights into atmospheric and ocean processes, the pace and consequences of climate change, the biology of ancient life, and the origins of the universe — to mention just some of the areas involved. And, yet, clearly there is still much more we can learn from that frozen continent,” he said Monday.

“It’s our responsibility as explorers, curiosity-seekers and residents of this remarkably diverse planet to persevere despite the challenges, and do so in a manner that is both cost effective and environmentally responsible,” he added.

In the report’s executive summary, the Blue Ribbon Panel members said the lack of a long-term plan for investing in infrastructure has led to deterioration of Antarctic facilities.

The report stated, “The Panel identifies the lack of a capital budget for the [USAP] as the root cause of most of the inefficiencies observed — a situation that no successful corporation would ever permit to persist. If a formal, federally endorsed capital budget cannot be provided, then NSF should, at a minimum, formulate a capital plan for U.S. activities in Antarctica that adapts to the needs of science and can be used as a basis for subsequent annual budgeting. The funding of maintenance would likewise benefit from more rigorous planning.”

The panel members visited all three USAP research stations at McMurdo, Palmer and South Pole during the 2011-12 field season in Antarctica, as well as logistics facilities based in New Zealand, Chile and the United States. A new 152-person facility was dedicated in 2008 at the South Pole, partly the result of the Blue Ribbon Panel led by Augustine in the late 1990s.

“Today, the South Pole Station is in relatively good shape. Unfortunately, one can’t say that for the facilities at McMurdo and at Palmer,” Augustine said as he cited several examples during the press conference, such as inefficient warehousing at McMurdo and the deficient pier at Palmer. The former was established in the mid-1950s for the International Geophysical Year, while the latter was constructed in the 1960s.

Augustine noted that operating logistics in Antarctica, with a supply chain that stretches 10,000 miles around the globe, has consumed at least 85 percent of the USAP’s budget over the last decade or more. The panel made it a priority to address infrastructure challenges while making efforts to free more dollars for research in the long-term, he said.

“If we don’t address this issue at this time, and we wait until next year or the year after that, not only will the cost be much higher, but we’ll reach the point where we’re doing all logistics and very little science in Antarctica — and that makes very little sense at all,” Augustine said.

The panel recommended maintaining McMurdo as the USAP’s logistics hub while replacing some aging facilities. (It would cost about $220 million in 2012 dollars to entirely replace McMurdo as it currently exists, according to the report.)

Topping the list of cost savings was a recommendation to cut logistics staffing both on the Ice and at other locations by 20 percent. That’s the equivalent of funding 60 new research projects at the median annual award size of $125,000, Augustine said, noting that such a reduction would be feasible with the introduction of new technologies and short-term investments.

“They’re not without pain,” Augustine said of the panel’s recommendations.

– Shifting re-supply operations for South Pole Station from the LC-130 aircraft to land-based traverses, which use tractors to haul fuel and cargo from McMurdo Station, and to introduce robotics. That would allow the NSF to eliminate four of the 10 New York Air National Guard airplanes that are needed to operate on the continent while freeing aircraft for deep-field support. The panel also recommended construction of a hard surface ice runway at South Pole Station, which would allow the larger, more efficient wheeled C-17 to land there.

– Improving energy efficiency and increasing the use of alternative energy. Specifically, the panel suggested expanding the use of wind energy at McMurdo Station, which shares a three-turbine wind farm with New Zealand’s Scott Base. It also recommended that the NSF invest in technology for converting trash-to-energy and burning waste oil so that it does not have to be returned to the United States.

– Pursuing new ships for research and ice-breaking support. The United States has been without a heavy icebreaker for several years. Icebreakers are needed to open a channel through the sea ice to McMurdo Station each year, a task once taken up by the U.S. Navy and then Coast Guard before the heavy icebreakers Polar Sea and Polar Star became inoperable. In recent years, the NSF has chartered icebreakers from Sweden and Russia. The Polar Star may be back in service by next year, but Augustine said the United States should invest in a new ship. President Barack Obama has requested $8 million in the fiscal year 2013 budget to initiate survey and design for a new Coast Guard polar icebreaker, which could take up to a decade to build and cost nearly $1 billion.

Suresh said NSF would develop a point-by-point response to the Blue Ribbon Panel report, as well as an action plan before the end of the year. He quoted from the executive summary before concluding his remarks:

“‘Overcoming these barriers requires a fundamental shift in the manner in which capital projects and major maintenance are planned, budgeted, and funded,'” Suresh said. “‘Simply working harder doing the same things that have been done in the past will not produce efficiencies of the magnitude needed in the future.”

He added, “I couldn’t agree more.”