By SpaceRef Editor
November 19, 2012
Filed under Earth, Earth Science, The Antarctic Sun, US 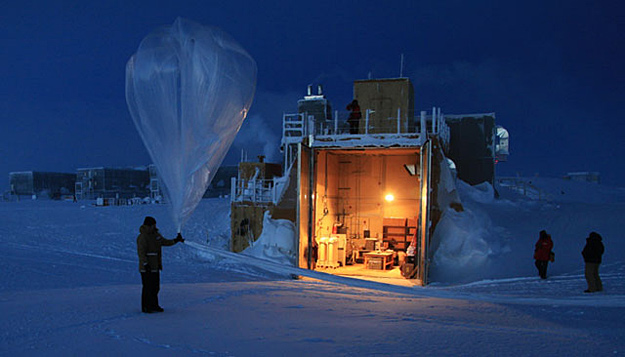 An ozone sonde is released from the Balloon Inflation Facility at the South Pole Station earlier this year. Ozone depletion above Antarctica was much less this austral spring due to warmer temperatures in the stratosphere. Photo Credit: Sven Lidstrom

Peter Rejcek, Antarctic Sun Editor: The annual ozone hole that forms above Antarctica during the Southern Hemisphere spring is the second smallest recorded in two decades.

However, scientists with NASA and NOAA say the reason is due to warmer-than-normal air temperatures in the stratosphere where the hole forms each year rather than a sign of real recovery.

“It happened to be a bit warmer this year high in the atmosphere above Antarctica, and that meant we didn’t see quite as much ozone depletion as we saw last year, when it was colder,” said Jim Butler with NOAA’s Earth System Research Laboratory in Boulder, Colo.

Measurements of ozone in the upper atmosphere come from satellites, ground-based stations and balloon-borne instruments released from various locations around Antarctica, including the Amundsen-Scott South Pole Station , which is managed by the National Science Foundation as part of the U.S. Antarctic Program .

The Atmospheric Research Observatory (ARO) is one of the six atmospheric baseline observatories for the Earth System Research Laboratory’s Global Monitoring Division . NOAA scientists based at ARO launch balloons to measure ozone vertically at least once a week year-round at the South Pole, and more frequently in the austral spring when the ozone hole forms.

“This has been a very unusual year for ozone depletion, and it’s certainly shown in our data,” said NOAA Station Chief Heather Moe.

The ozone layer in the Earth’s stratosphere, between about 10 and 30 kilometers above the ground, helps shield the planet from harmful ultraviolet radiation. Human-produced compounds known as chlorofluorocarbons, or CFCs, release ozone-destroying chemicals into the atmosphere that are responsible for the depletion.

Extreme cold, ice-cloud formation in the stratosphere, and a pattern of rapidly circulating air, called the polar vortex, make the ozone layer over Antarctica much more vulnerable to CFC destruction than almost anywhere else on the planet. However, more recently, the Arctic has experienced similar depletion events. [See previous article — Recovery and regression: Antarctic ozone hole should start healing, while Arctic hole getting worse.]

Ozone sondes, the instruments launched by balloon from the South Pole, show that by Oct. 5 the main depletion region from between 14 and 21 kilometers is “fairly well cleared out,” according to Moe, though the ozone never dropped all the way to zero as it has in years of heavy depletion.

However, 10 days later, while the main depletion region is still evident, a huge amount of ozone returned to the top of the profile, based on the 22-year average. The temperature in the upper part of the stratosphere was also significantly warmer.

“We’re exceeding the previous warmest ever — if ever is defined as the last 22 years [that we have records] — for this time of year from 13 to 26 kilometers, and not just by a little bit,” Moe said.

For example, the temperature at 20 kilometers was below minus 75 degrees Celsius on Oct. 5. Ten days later, it was about 30 degrees warmer at the same altitude.

It’s been 25 years since an international agreement, the Montreal Protocol , was signed to regulate production of ozone-depleting chemicals. However, NOAA scientists say it could be another decade before they detect early signs of Antarctic ozone layer recovery. The ozone layer above Antarctica likely will not return to its early 1980s state until about 2060 due the large quantity and long lifetime of ozone-depleting substances in the atmosphere.