Assessment and Plan for Organizational Culture Change at NASA 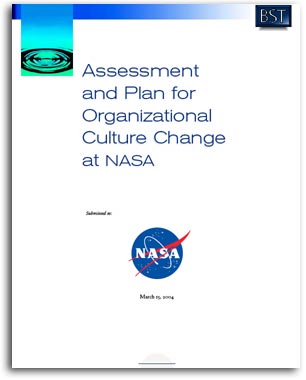 On February 1, 2003, the Space Shuttle Columbia and its crew of seven were lost during return to Earth. A group of distinguished experts was appointed to comprise the Columbia Accident Investigation Board (CAIB), and this group spent six months conducting a thorough investigation of the cause of the accident. The CAIB found that NASA’s history and culture contributed as much to the Columbia accident as any technical failure.

As a result of the CAIB and related activities, NASA established the objective of completely transforming its organizational and safety culture. BST was selected to assist NASA in the development and implementation of a plan for changing the safety climate and culture Agency-wide. The scope of this effort is to develop and deploy an organizational culture change initiative within NASA, with an emphasis on safety climate and culture.

This assessment concluded that there are many positive aspects to the NASA culture. The NASA culture reflects a long legacy of technical excellence, a spirit of teamwork and pride, and a can-do approach to task achievement. In particular, culture attributes related to work group functioning at the peer level are among the strongest we have seen. These characteristics are consistent with NASA’s rating in the 2003 Office of Personnel Management Survey at the top of the Best Places to Work in the Federal Government.

Despite these positive attributes, there are some important needs for improvement. The present NASA culture does not yet fully reflect the Agency’s espoused core values of Safety, People, Excellence, and Integrity. The culture reflects an organization in transition, with many ongoing initiatives and lack of a clear sense at working levels of “how it all fits together”.

There is an opportunity and need to become an organization whose espoused values are fully integrated into its culture – an organization that “lives the values” by fostering cultural integrity. We recommend an initiative with that as its theme.

The recommended initiative should address working through existing leaders to instill behaviors consistent with the Agency’s values and the desired culture, while also establishing the foundation for developing future leaders who will sustain that culture and individual contributors who reflect the desired culture in their actions. A long-term (three year) plan is identified with a specific series of actions identified in the first five months to launch this effort.