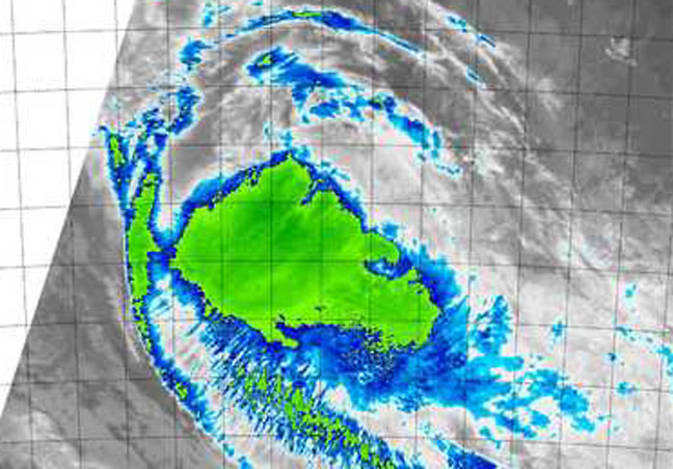 Tropical Cyclone Ola was being battered by vertical wind shear in the Southern Pacific Ocean when NASA’s Aqua satellite passed overhead and captured an infrared picture of the storm.

The Moderate Resolution Imaging Spectroradiometer or MODIS instrument aboard Aqua gathered infrared data on the storm on Feb. 3, 2015 at 13:50 UTC (8:50a.m. EST) that showed the temperatures of the cloud tops. Higher cloud tops are colder and are indicative of stronger thunderstorms. The infrared data showed that the clouds and thunderstorms were being pushed to the southeast of the center from moderate northwesterly vertical wind shear.

Forecasters at the JTWC noted that the NOAA-19 polar orbiting satellite provided a microwave image that showed diminishing convection, sheared to the southeast of a partially-exposed low-level circulation center.

The vertical wind shear is forecast to continue increasing as Ola moves into cooler sea surface temperatures. Both of those factors are expected to cause the storm to dissipate by the end of the day on Feb. 3.