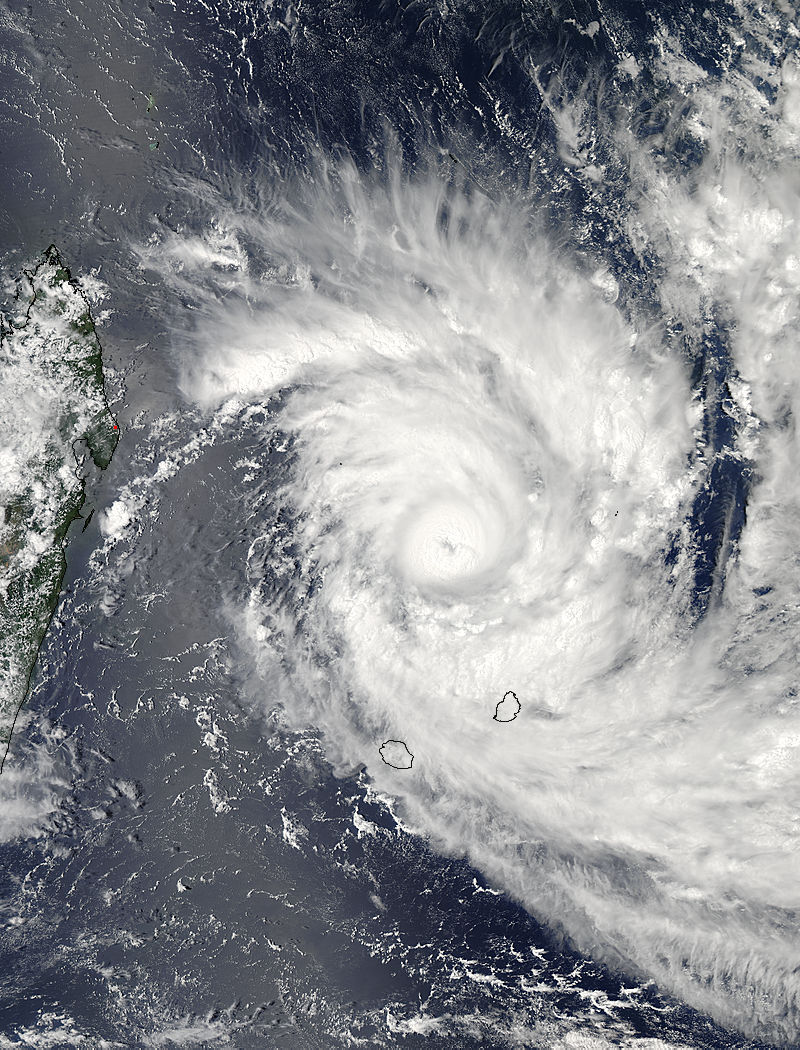 NASA’s Aqua satellite passed over Tropical Cyclone Bansi on January 12 as it was intensifying rapidly and saw a cloud-covered eye in the storm’s center. Bansi has triggered warnings for the island of Mauritius and is expected to continue intensifying while passing it.

On January 11 at 06:40 UTC (1:40 a.m. EST) the MODIS instrument aboard NASA’s Terra satellite captured an image of Tropical Cyclone Bansi. The MODIS image showed strong thunderstorms tightly wrapped around the center, and a large, wide band of thunderstorms in the storm’s eastern quadrant spiraling around the storm and into the center from the west.

By January 12 at 10:10 UTC (5:10 a.m. EST) when the MODIS instrument aboard NASA’s Aqua satellite passed overhead, the storm had rapidly consolidated and the bands of thunderstorms circling the center had expanded. Bands of thunderstorms spiraling around the storm wrapped around the storm from the northwest to the southeast and finally wrapping into the center from the west. The eye of the storm appeared covered by high clouds.

In Mauritius, the warnings on January 12 were changed to a tropical cyclone warning class 2. La Reunion, which lies to the southwest of Mauritius and is farther from the storm remained on Yellow pre-alert.

In less than 24 hours after it formed, Bansi strengthened from a minimal tropical storm into a major hurricane (Category 3) with maximum sustained winds. A Category three hurricane on the Saffir-Simpson wind scale has sustained winds from 111 to 129 mph (96 to 112 knots/178 to 208 kph).

The Joint Typhoon Warning Center noted that Bansi continued to rapidly intensify as a result of passage over warm water, low vertical wind shear, and outflow aloft. A tropical cyclone needs good outflow (where winds spread out at the top of the hurricane) to maintain strength. Outflow means that air spreads out over the top of the storm assisting in its development. When outflow is weakened, the storm weakens.

Bansi is moving eastward along the southern edge of a near-equatorial ridge (elongated area) of high pressure. Bansi is forecast to continue moving to the east then southeast while strengthening to 125 knots before running into atmospheric conditions and cooler waters that will weaken it.