By SpaceRef Editor
January 2, 2011
Filed under Earth, polar, The Antarctic Sun, US 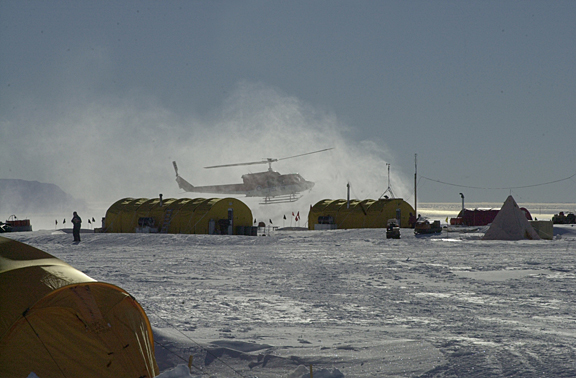 Photo: A helicopter lands behind the main cooking and communications tents at Beardmore Camp in the Transantarctic Mountains. Many scientists spend their season of research living and working out of field camps such as this one. Helicopters are one of several methods of transportation used by the U.S. Antarctic Program. Kristan Hutchison, NSF

[Editor’s Note: To quote a former Antarctic Sun editor … “Like the mythical town of Brigadoon, a village of tents appears on a glacial arm 50 miles from Beardmore Glacier about once a decade, then disappears.” Such a scientific field camp is again appearing in the Transantarctic Mountains this year. Former National Science Foundation-staffer Guy Guthridge recalls the first and perhaps most unique incarnation of the camp 25 years ago.]

By Guy Guthridge, Special to the Antarctic Sun: Science, long celebrated for its starring role in bringing diplomats to the negotiating table to sign the 1959 Antarctic Treaty, gave an encore performance in 1985. For seven gorgeous days in January that year, an unlikely mix of international lawyers and foreign-service officers from 25 countries — treaty and non-treaty nations both — left their striped pants behind to rough it with scientists in the Transantarctic Mountains.

I joined the spirited and articulate group after hosting a long and meticulously planned day with them to show off America’s research station at the geographic South Pole, a two-hour plane ride from the diplomats’ camp.

Twenty-five years later, and 50 years since the United States Senate ratified our nation’s adherence to the treaty, it’s worth looking back at a probably unrepeatable event in U.S. Antarctic Program history.

For sure, the camp was an unusual field project in the U.S. Antarctic Program. Over more than two years Malaysia, Antigua and Barbuda, had made no secret of their challenge to the original 12 Antarctic Treaty signatories — and the 20 nations that since had joined — that the treaty was the wrong way to manage Antarctica.

They argued that the treaty had three fatal flaws: it was exclusive (not all nations were members), it was total (it covered all activities in Antarctica), and it was unaccountable (it was not subject to review by another body).

“The Question of Antarctica” had been on the United Nations General Assembly agenda in 1983. The next year a U.N. report, with three volumes of annexes containing governments’ responses, stimulated another discussion at New York. Malaysia led the small chorus that thought a U.N.-centered regime should replace the treaty.

The treaty nations were not enthusiastic about this initiative.

James H. Zumberge, president of the University of Southern California and U.S. delegate to the Scientific Committee on Antarctic Research (SCAR), was concerned that officials in non-Antarctic Treaty nations simply didn’t know enough about Antarctica and the treaty. He arranged the workshop in Antarctica, which took place at a research camp on the Bowden Neve, 357 nautical miles from the South Pole.

The camp was called Beardmore South because it was near Beardmore Glacier. It consisted of Jameways — insulated canvas huts with running water and heat and not much else.

The 57 scientists and diplomats snored together, dressed together, ate together, and conferred. They punctuated the day-long sessions only with walks and the occasional ball game in the beautiful setting — along with their one-day excursion to Amundsen-Scott South Pole Station.

“In an atmosphere conducive to free interchange, participants were able to gain a deeper appreciation of each others’ views … while experiencing the practical realities of Antarctic operations,” Zumberge and Lee A. Kimball wrote in a 1986 National Academy Press book (Antarctic Treaty System – An Assessment) recording the workshop’s proceedings.

The discussions, I recall, were overwhelmingly friendly but frank.

The stance of scientists at the conference toward the nonjoiners seemed, mostly, “Get real.”

William F. Budd (Australia) noted that “knowledge needs to be recognized as the primary motivation for the high level of continued interest” and that the treaty was formed only “after SCAR provided an international political framework.” Acknowledging that hopes for mineral resources had attracted attention to the continent (the treaty’s mining ban was six years in the future) he said, “economically viable exploitation in the foreseeable future is not a likely prospect.” The statement still seems valid a quarter-century later.

Zumberge explained SCAR in detail. E. Fred Roots (Canada) discussed the role of science in the treaty system: “In no other large part of the world is the pursuit of science such a dominant activity.”

L.F. Macedo de Soares Guimaraes (Brazil) provided the eloquent and moving perspective of a new consultative nation, Brazil having achieved that status just four months earlier. An enthusiastic public backed his country’s new Antarctic science program, and Guimaraes argued that the activities of the consultative parties are not based on expertise or experience: “Brazil could hardly claim that. The right words are not expertise or experience, but involvement and responsibility.”

Zain Azraai (Malaysia), the presumed antagonist, was affable, articulate, popular — and unrepentant. The treaty parties, he said, regarded the U.N. debate “as an irrelevant nuisance to their pursuit of the proper management of Antarctica” even though the debate “did not make a constructive contribution.” But — he conceded while in Antarctica — “All sides need to exercise forbearance, refrain from casting aspersions on one another’s motives, and examine issues with an open mind.”

My impression was that the workshop was bold and brilliant — that science’s never-ending quest for reality trumped any diplomatic maneuver and that the sincere, sometimes heartfelt conversations in the cold, bright sunlight couldn’t but lead to rational decisions by governments.

Nevertheless, “The Question of Antarctica” remained on the United Nations agenda until well into the 21st century. Perhaps the tension between member and nonmember nations won’t ever go away, just as the Pergamon Museum’s retention of the Market Gate of Miletus and the British Museum’s hold on the Elgin Marbles will stay in dispute. Custodianship — of priceless marbles or a priceless continent — perhaps always will be the uneasy mix of assertive protection and generous sharing.

It’s not as if tension doesn’t exist amongst the treaty parties themselves. During the visit to Amundsen-Scott South Pole Station by those 57 distinguished Beardmore South participants, a Norwegian and a British representative cornered me as we stood by the vertical copper pipe in the snow marking the exact location of 90 degrees south latitude, the South Pole itself. Inserted into the pipe, as then was the custom, was the flag of the United States of America — flying in the cold breeze from a wood staff.

Never mind that we Americans had named South Pole Station after the non-U.S. heroes who first reached this spot, and never mind that U.S. taxpayers who’d never be so lucky as to be there had sponsored these diplomats’ trip: the visitors viewed the flag as an affront to the international character of the Antarctic.

Maybe they were right, those two, and maybe not. Either way, these days a handcrafted medallion — in 2010 it’s an engraving of the South Pole Telescope and IceCube Observatory — caps the annually repositioned copper pipe. The USA flag flies, rank and file, alongside the flags of fellow Antarctic Treaty nations in a circle around a ceremonial South Pole marker a short distance away.

Now entering its second half-century, the Antarctic Treaty seems to have withstood its tests. International Antarctic science is more robust than ever. Since 1985, the treaty has added another 15 members, although Malaysia hasn’t signed on. The 47 treaty nations represent two-thirds of the world’s human population and four-fifths of its economy.

And the Beardmore South camp? Withstanding the 1985 winter unoccupied, it was reopened on Oct. 26 for its originally intended use as a helicopter-supported field camp. Sixty-six researchers in 18 earth and atmospheric science projects successfully operated throughout the austral summer. The camp was closed on Feb. 3, 1986, and most of the structures, equipment, and supplies were retrograded to McMurdo for future use. A small emergency shelter was left in place as a refuge.

Guy Guthridge retired from the National Science Foundation after 35 years. He played a pivotal role in creating the Foundation’s unique Antarctic Artists and Writers Program.