AMASE blog 2009: Science Operation Work Group: How To Do Science With a Rover on Mars

Driving a rover on Mars and obtaining useful scientific information is something you don’t learn from one day to another. You need a lot of training and you need to be able to work with people that have different scientific backgrounds. One way to learn it is by carrying out the Science Operation Work Group (SOWG) during the AMASE expedition. The 2009 AMASE SOWG was a combined NASA/ESA effort aimed at learning how to prepare for running future missions that will search for life on Mars.

Imagine that a rover has landed on Mars, like Spirit, Opportunity or the future Mars Science Laboratory or ExoMars missions. The first pictures that the rover sent back show an area covered by small rocks and a couple of outcrops about ten metres away. This is so far the only information you have: you don’t know what the chemical and mineralogical composition of these rocks are, or if the area could have harboured life. Your rover has several instruments that can give you plenty of information, but it is not so easy as that: the amount of energy is limited, you can drive a maximum distance of 100 metres everyday, you can not use different instruments at the same time and some of them may take long time -and/or energy- to obtain the measurements we need.

Image 1: Svalbard, one of the best Martian analogs of the world to carry out preparation activities for future mission to the planet Mars. Image: Juan Diego Rodriguez-Blanco.

And moreover, there are plenty of other possibilities: you can study the rocky material that is very close to the rover by using different analytical techniques, you can take high-resolution panoramic images with filters at different wavelengths, you can drive, select a rock, drill and obtain microscopic images… but all these operations take time and cost energy. Your rover has limited mobility, navigational errors, limited bandwidth to connect with the Earth and not all the energy you would like to. Moreover, you have quite limited time to choose what to do, because of the length of the Martian day and also the availability of the orbiters that are used to establish connection between the rover and the Deep Space tracking stations.

Image 2: Where would you drive? What are the interesting rocks to study? Is it better not to drive and use the energy instead to obtain high-resolution images? Should we drive only a little bit to get closer to the outcrop and use remote spectroscopic techniques to analyze specific rocks? What is the darker material near us? Are they outcrops, rocks with different composition or just shadows? This image is a composition of four pictures from the rover Navcams that were used for the SOWG mission scenario on AMASE 2009. Image: ExoMars Pancam Group

So the main question is: what to do? The next missions that will be sent to the Red Planet (Mars Science Laboratory, ExoMars, Mars Sample Return) will be focused in the search for past or present life and the return of samples to Earth. That means that we need to find the appropriate samples that should give us the information we are looking for. Just as an example: if the samples we send back to the Earth are basalts coming from volcanic site, the probability of obtaining data valuable for astrobiology may be lower. However, if we find carbonates or clay the possibilities of success are higher. So the task is in theory simple: find the appropriate sample! However the way of carrying out this task is pretty difficult. The group of scientists involved in these decisions have different backgrounds (geologists, physicists, biologists, engineers…) and they have to make the right decisions by consensus in a quite limited amount of time.

This is exactly what we have been doing during the last 2 days on AMASE 2009. We are obviously not using information from the robotic explorers that are studying Mars at present. However, because Svalbard is the perfect terrestrial Martian analog on Earth, the Science Operation Work Group (SOWG) on AMASE can simulate a rover mission to Mars. So how do we do that? In a simply way: one group of people is in the field obtaining the data (they are our rover) and another group is on the ship receiving it, discussing the possibilities and science questions/tasks we have set out to answer. All the people onboard ship are “blind” in the sense that they have not seen the actual site except via the “eyes” of the “rover”. The SOWG group can not talk or connect with the people/rover in the field; they are only allowed to send them a file with the detailed instructions for the rover and that’s it. 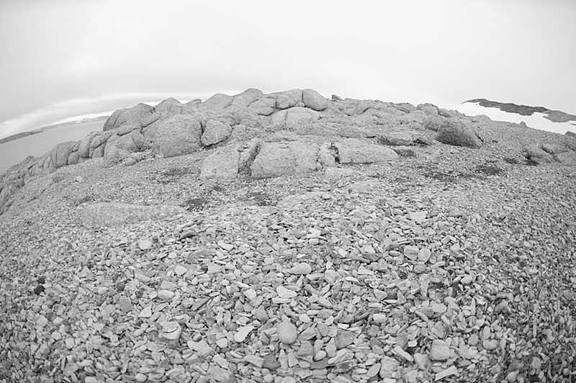 Image 3: a portion of the outcrop seen by the EXOMars Pancam prototype, from a closer position after driving the rover several metres and before deciding what specific analytical objectives to choose. Image: ExoMars Pancam Group.

Every sequence of activities has to be fully planned in a couple of hours. If there is any delay we can not send the data to the rover (uplink), and thus we would miss the window of opportunity to communicate with the rover and thus we would potentially waste a lot extra time (and that would mean lots of money wasted because the rover would do nothing for one day!). On the other hand, the transmission of data from Mars (downlink) sometimes can be problematic, because part of the data could not be received or the antennas at the Deep Space Network could be needed for other missions due to special requirements (another space probe enters in safe mode, there is another mission that needs more attention in a specific moment…). So at the end things have to be done effectively and reliably.

This year the task we were set as the AMASE 2009 SOWG was related to a Mars Sample Return mission and the mission scenario was the following: “a successful landing took place in a large impact crater considered to have sedimentary deposits. During the first 100 sols (Martian days) the rover travelled through a mixed sedimentary scree considered to be primarily impact ejecta. Using orbital images, the mission scientist identified probably bedrocks, so the rover took all that time to travel there. Today, at the end of sol 99, the rover position was at only 50 metres of the outcrops and commanded to move to a distance of 10 metres from them”. Our mission: to decide what areas to study, where to go and what analyses to do in order to take one sample of astrobiological interest to return to the Earth. 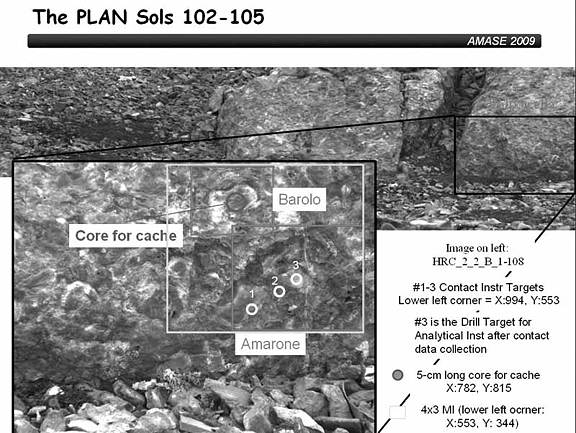 Image 4: from the previous image, these are the areas selected for further study. The outcrops have been studied in detail and the SOWG team has selected a list of activities for the rover, indicating which are the most important ones. For this area we planned high-resolution microscopic images, infrared and Raman measurements, drilling cores for elemental analyses, etc. and coring for cashing for sample return. Image: ExoMars Pancam Group.

Knowing the mission scenario, we did as many uplinks and downlink cycles as we could, having a maximum time of two hours to prepare every uplink. The main task was to prepare a time-ordered sequence of activities, with all necessary documentation (annotated images of drive targets, remote sensing targets, etc.) and to interpret the data acquired by the rover.

Carrying out the task is not so simple and there has to be a structure in the group: there is a SOWG chair (Doug Ming) that leads the SOWG team and has the final say on the activities if consensus can not be reached. There were people responsible for the rover scientific instruments (cameras, spectrometers, different analysis systems, drilling tool, microscopic imager…). Finally all of us were distributed into three science theme groups that analyzed the data and prepared the activities requests for the full SOWG meeting: geomorphology, mineralogy and geochemistry, and life sciences. Steve Squyres was the mission manager, the single point of contact between the SOWG and the rover and also he was the responsible person to provide answers to questions regarding rover capabilities, resource utilization, etc.

Image 5: the AMASE group in the outcrop area after the SOWG exercise was carried out, having a look at the area imaged by the rover. Image: Juan Diego Rodriguez-Blanco.

And there is some fun, of course! During the SOWG exercise we were quite comfortable in the meeting room of the Lance, the ship that we use for AMASE expeditions, but people in the field had an awful weather, with temperatures close to 0*C and lots of rain, waiting hours and hours for our instructions and keeping the instruments safe. It was very funny to see a couple of pictures from the Microscopic imager that showed a wet surface… rain on Mars?! They also had to drill a small core in one of the rocks, a task that would have been pretty difficult for a rover because three people were needed for it as the rock was really hard. Also when the SOWG group were starting to focus on their work, Steve came and said: ‘I am afraid that I have to give you bad news: the Cassini spacecraft has entered into safe mode and you will have to plan the next three sols in a couple of hours’… a task that was finished almost 30 seconds before the deadline.

But probably the most surprising part of the SOWG is its end: after a long 12 hours and 5 sols all SOWG team members that have been discussing and making decisions about what the rover should do were taken out to visit the field to show them what the area of research looked like. The most surprising thing was the fact that from the perspective of the rover everything seems to be very different. Sometimes the team misses interesting objectives and focuses their attention in other things that are not so relevant for the Mars mission. Some other times they make mistakes misunderstanding the location or size of the rocks or the inclination of the terrain… however, these mistakes are part of the process of learning. But in a few years there will be people that will be working on the future NASA or ESA rover missions to Mars, so this learning process will be extremely important for the success of robotic space exploration.