At 7:12 a.m. ET this morning the Soyuz TMA-07M rocket with the Expedition 34 crew of Chris Hadfield (Canada), Tom Marshburn (USA) and Roman Romanenko (Russia) launched to the International Space Station on Expedition 34 from the Baikonur Cosmodrome in Kazakhstan.
As the sun set in the early evening in Baikonour it was a frigid -18c at launch time and the astronauts wore an extra thermal layer to keep them warm.

Only 9 minutes after launch and after years of training Hadfield and his crewmates were in space beginning their first orbit. It will take them about 2 days to align and rendezvous with the International Space Station with docking scheduled to occur at 9:12 a.m. ET (14:12 GMT) on Friday. 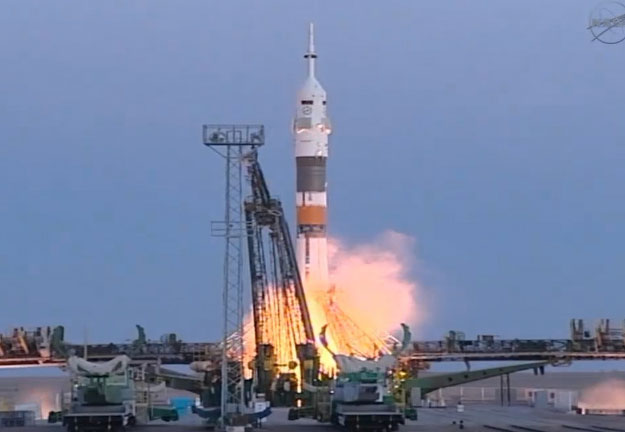 About three hours after docking, hatches between the Soyuz and the space station will open. Marshburn, Romanenko and Hadfield will be greeted by space station Expedition 34 Commander Kevin Ford of NASA and Flight Engineers Oleg Novitskiy and Evgeny Tarelkin of Roscosmos, who have been in orbit since late-October.

Marshburn, Romanenko and Hadfield will remain aboard the station until May 2013. Ford, Novitskiy and Tarelkin will return to Earth on March 15, when Hadfield will become the first Canadian commander of the space station.

The focus of Expedition 34 is scientific research, with the astronauts serving as subjects for human physiology tests, including examinations of astronaut bone loss. The crew also is conducting a wide range of physical science, Earth observation, human research and
technology demonstration investigations. Experiments will investigate how fire behaves in space, which could help improve engine fuel efficiency and fire suppression methods in space and on Earth. Other research will look at fluids that change physical properties in the
presence of a magnet, which could improve bridge and building designs to better withstand earthquakes. With the help of cameras set up by the crew, students on Earth are capturing photos of our planet.