The hatches between the International Space Station and the newly arrived Soyuz MS-22 spacecraft officially opened at 3:34 p.m. EDT. The arrival of three new crew members to the existing seven people already aboard for Expedition 67 temporarily increases the station’s population to 10.

Roscosmos cosmonauts Oleg Artemyev, Denis Matveev, and Sergey Korsakov will return to Earth Sept. 29 on the Soyuz MS-21 spacecraft, which is currently docked at the space station, for a parachute-assisted landing on the Kazakh steppe.

Expedition 67 astronauts Bob Hines, Kjell Lindgren, and Jessica Watkins of NASA and astronaut Samantha Cristoforetti of ESA (European Space Agency) have been aboard since arriving April 27, 2022, on the SpaceX Dragon Freedom. Freedom and its crew are currently planned to return early-to-mid October.

68 Soyuz Launch/Dock: 68S successfully launched at 8:54 AM CT this morning from the Baikonur Cosmodrome. Roscosmos cosmonauts Sergey Prokopyev and Dmitry Petelin launched alongside NASA astronaut Frank Rubio, who is participating on his first spaceflight to the Space Station. The trio docked to Mini-Research Module 1 at 12:07 PM CT beginning their six-month Space Station research mission. The ISS crew complement has increased to 10 crewmembers and will remain so until 67S returns to Earth on Thursday, September 29th.

Autonomous Systems and Operations (AMO) EXPRESS-2.5: A session was performed in which simulated commanding of EXPRESS rack 7 was conducted. AMO EXPRESS 2.5 conducts tests using automation and decision support software to help crew members manage spacecraft subsystems. The ability to perform such tasks without assistance from Mission Control is vital for future space exploration such as a mission to Mars, where significant time delays will occur in communications between space and ground. Using automation and decision support software to guide astronauts through complex spacecraft subsystem management activities also reduces the time needed to perform a task.

Foams and Emulsions: The Experiment 2 science sessions were continued with the generation, injection, and observation of foam. The Experiment 2 sessions created a foam and injected it into an area with a wire frame to observe the foam’s interaction with the wire frame and development over time. Foams (dispersions of bubbles in a liquid) and emulsions (dispersions of droplets in a liquid) appear in many food, consumer, and personal care products and are used in a variety of industries. Structure and Stability of Foams and Emulsions examines the properties and performance of foams and emulsions, including using particles of various shapes and surface roughness to stabilize these materials. Microgravity enables examination of the microstructures of foams and emulsions due to the elimination of the influence of gravity-related factors such as buoyancy of particles.

Multiple User System for Earth Sensing Facility (MUSES): The crew performed the routine MUSES server drawer vent cleaning. MUSES is an Earth imaging platform. As part of the company’s new commercial space-based digital imaging business, MUSES hosts earth-viewing instruments such as high-resolution digital cameras, hyperspectral imagers, and provides precision pointing and other accommodations. It hosts up to four instruments at the same time, and offers the ability to change, upgrade, and robotically service those instruments. It also provides a test bed for technology demonstration and maturation by providing long-term access to the space environment on the ISS.

Ring Sheared Drop (RSD): The RSD hardware was removed from the MSG facility and stowed.  RSD was most recently used to support the Interfacial Bioprocessing of Pharmaceuticals (IBP) investigation, but the team elected to pause sample processing until a supplemental data storage system can be delivered to the ISS. The RSD module is a containerless liquid system that makes it possible to study protein solutions without the effects of interactions with solid walls. RSD-IBP studies the behavior of high-concentration protein fluids and tests computer models for predicting that behavior. More accurate models could enable production of next-generation medicines for treating cancers and other diseases.

ISS Safety Briefing: After the Soyuz docked to the Space Station, the 67S and Freedom crews helped acquainting the new 68S crewmembers with the potential hazards and available safety measures onboard ISS as well as the equipment needed for initial emergency response.

Treadmill 2 (T2) Moderate Temperature Loop (MTL) Inspection: The crew used the USOS Endoscope to inspect the MTL Hoses under T2 for Foreign Object Debris (FOD), Kapton Tape, or Glass Tape damage. The MTL coolant hoses on the Treadmill can be damaged by friction and compression from various pieces of hardware interfering with their regular path. To prevent any further damage to the T2 MTL hoses, crew installed a Teflon Spiral Wrap around the hoses.

Extravehicular Activity (EVA) Tether Inspection: To prepare for the upcoming EVAs, the crew inspected the safety tethers and D-ring extenders. The crew inspected for Micrometeoroid/Orbital Debris (MMOD) damage or discoloration that could diminish the structural integrity of the tethers. 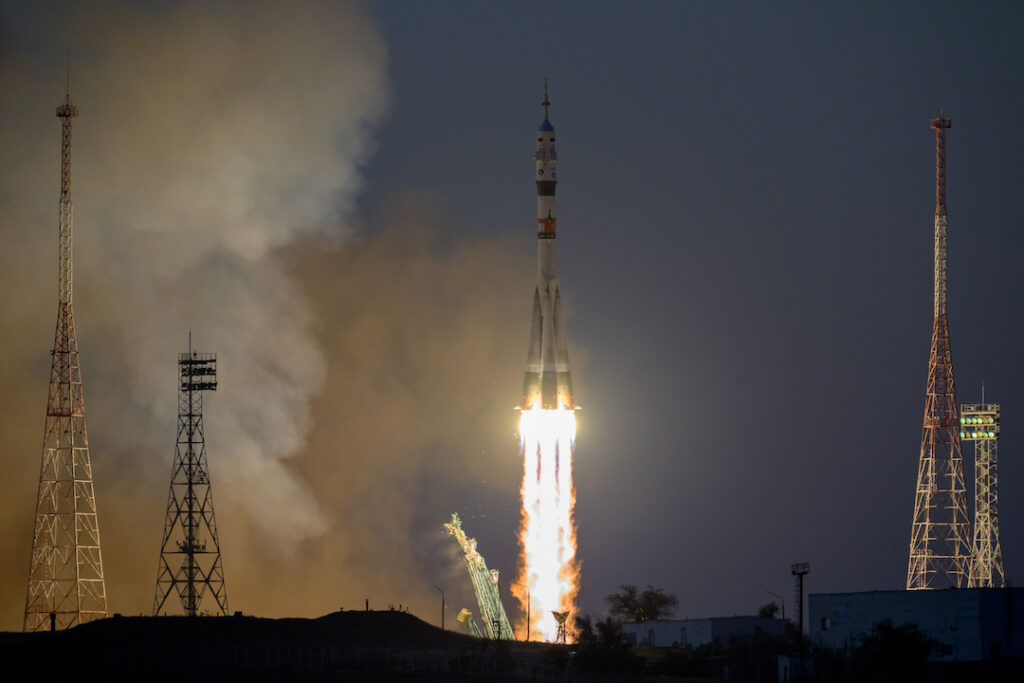