The three Expedition 63 crew members living aboard the International Space Station will spend the weekend inside the orbiting lab’s Russian segment.
Commander Chris Cassidy and his crewmates Ivan Vagner and Anatoly Ivanishin will stay in the Zvezda service module from Friday night into Monday morning.

The station’s atmosphere is maintained at pressure comfortable for the crew members, and a tiny bit of that air leaks over time, requiring routine repressurization from nitrogen tanks delivered on cargo resupply missions. In September 2019, NASA and its international partners first saw indications of a slight increase above the standard cabin air leak rate. Because of routine station operations like spacewalks and spacecraft arrivals and departures, it took time to gather enough data to characterize those measurements. That rate has slightly increased, so the teams are working a plan to isolate, identify, and potentially repair the source. The leak is still within segment specifications and presents no immediate danger to the crew or the space station.

All the space station hatches will be closed this weekend so mission controllers can carefully monitor the air pressure in each module. The test presents no safety concern for the crew. The test should determine which module is experiencing a higher-than-normal leak rate. The U.S. and Russian specialists expect preliminary results should be available for review by the end of next week.

The three station residents will have plenty of room in Zvezda this weekend. The module provides the living quarters that enabled permanent human habitation to begin nearly 20 years ago when the Expedition 1 crew arrived at the station Nov. 2, 2000. Cassidy, Vagner, and Ivanishin also will have access to the Poisk mini-research module and their Soyuz MS-16 crew ship for the duration of their stay.

Astrobee: The crew powered off the Astrobee free flyers and placed temp stowed items back in their original positions in the JEM module. Astrobee is made up of three free-flying, cube-shaped robots which are designed to help scientists and engineers develop and test technologies for use in microgravity to assist astronauts with routine chores, and give ground controllers additional eyes and ears on the space station. The autonomous robots, powered by fans and vision-based navigation, perform crew monitoring, sampling, logistics management, and accommodate up to three investigations.

Myotones (Muscle Tone in Space): The crew performed a session of Myotones Measurements using the Myotones device on ten specific muscle locations. Ultrasound measurements were also performed. Myotones investigation observes the biochemical properties of muscles during long-term exposure to the spaceflight environment. Results from this investigation are expected to provide insight into principles of human resting muscle tone, which could lead to the development of new strategies for alternative treatments for rehabilitation both on Earth and for future space missions.

Genes in Space-6: The crew moved samples from MELFI 2 to MELFI 3 in order to allow Genes in Space operations during the JEM module isolation timeframe. Deoxyribonucleic acid (DNA) damage caused by increased exposure to radiation can affect the long-term health of astronauts. Genes in Space-6 determines the optimal DNA repair mechanisms that cells use in the spaceflight environment. The investigation evaluates the entire process in space for the first time by inducing DNA damage in cells and assessing mutation and repair at the molecular level using the miniPCR and the Biomolecule Sequencer tools aboard the space station.

Emergency Simulation On Board Training (OBT): Today, the crew participated in a training exercise for ISS fire and rapid depressurization emergency scenarios. The emergency training consisted of crew and ground controllers utilizing simulator data to identify each of the emergency scenarios and executing the appropriate response procedure(s). During the exercise, the crew physically translated through ISS to the appropriate response locations to visualize the use of equipment and interfaces. The teams also practiced communication and coordination with the mission control centers in Houston and Moscow for each scenario. A post-simulation crew conference was conducted to discuss and evaluate the crew/ground control responses during the training exercise.

USOS Isolation Gather: Today, the crew gathered items to be transferred to the Russian segment for the upcoming USOS isolation period. The ECLS Community has been tracking an increase in nominal atmosphere leakage since September 2019. The crew will close several module hatches tomorrow in order for the ground team to monitor pressures throughout the weekend. The crew will remain isolated in the Russian Segment (SM/MRM2/Soyuz/Progress) until Monday afternoon.

Crew Off Duty
Today’s Planned Activities:
All activities are complete unless otherwise noted. 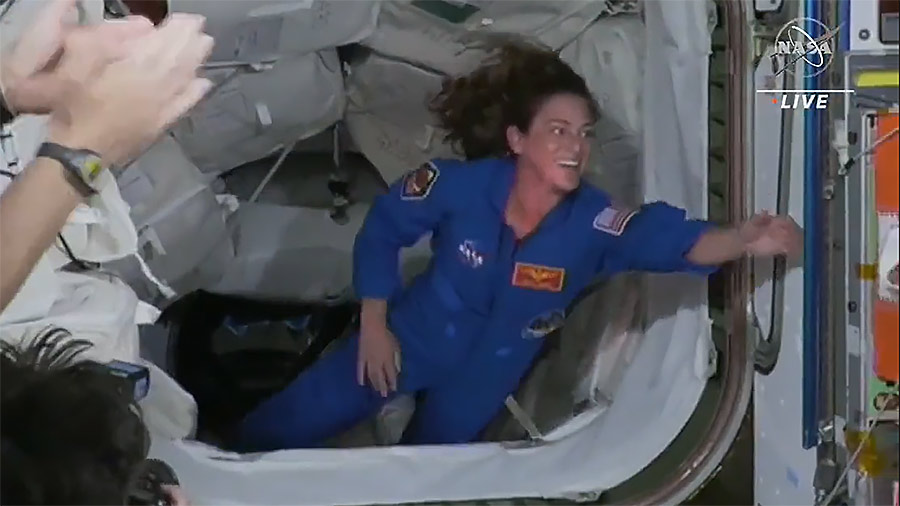