Experimental data obtained in June 2012 on Ad Astra’s VX-200 high power VASIMR(R) engine prototype showed an improvement in efficiency at intermediate values of specific impulse (Isp) below the 5000 sec optimal point demonstrated in late 2010. The engine performance had yet to be optimized at these intermediate values. The June 2012 campaign successfully accomplished this task, producing a new optimized performance model that shows approximately a 10% improvement in engine efficiency over a wide Isp range.

The June experimental campaign builds on prior data obtained in 2009 and 2010 which demonstrated high efficiency at high specific impulse. However, unlike the prior data, the new experiments have optimized the plasma discharge at every point, resulting in a new performance curve (Fig.-1, blue trace). This substantial improvement in performance is a new operational landmark for the 200 kW engine prototype. The attached graph also shows how the engine performance improved over several experimental campaigns that began in 2009 when the first high power tests were conducted. The efficiency improvements have been achieved by improving the design of critical engine components, “fine-tuning” the settings of the radiofrequency power system, and improving the software that controls the engine during startup and firing. 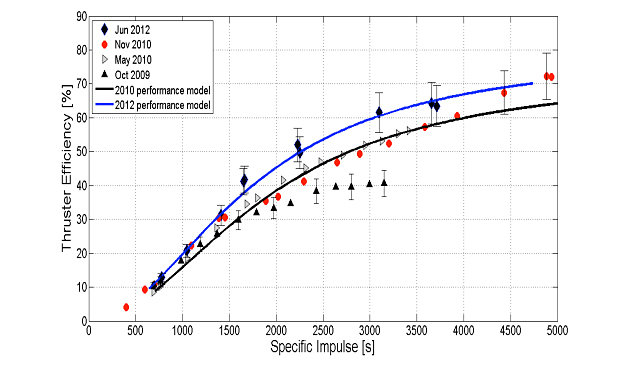 The throttling that makes VASIMR (R) uniquely distinctive from other in-space propulsion designs is its ability to vary the plasma exhaust parameters (thrust and Isp) while operating at a fixed total power level. This technique, called “Constant Power Throttling (CPT),” is similar to the function of a transmission in an automobile. Using optimal CPT for different phases of a mission, VASIMR(R) is capable of increased payload mass and decreased trip times compared to other technologies.

Constant Power Throttling is made possible by changing the relative fraction of power going to the first stage (helicon) and second stage (ion cyclotron heating (ICH)) systems and simultaneously changing the rate at which the propellant gas is fed into the engine. For high thrust, power is routed predominantly to the helicon with propellant consumed at a relatively high rate, producing more ions at lower exhaust velocity (low Isp). For high Isp, more power is diverted to the ICH while less power and propellant is being fed to the helicon with concomitant reductions in thrust. The June 2012 experimental data show that for power ratios >= 2, this process can be done without significant loss in efficiency. 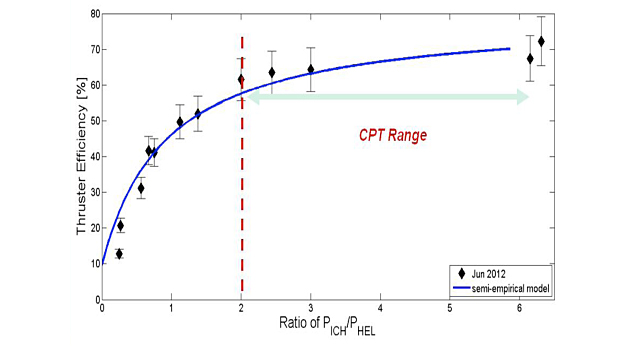 Fig-2: VX-200 engine efficiency vs second to first stage power ratio. Above a ratio of >= 2, throttling can be done without significant loss in efficiency.

“The recent data represent one more step in the full characterization of the engine and validate the assumptions by which our business models are based” said Franklin R. Chang Diaz, Ad Astra’s CEO. “I am proud of our team and of the reliability demonstrated by the VX-200 system. It took approximately one thousand carefully adjusted firings of the engine to determine the optimized performance conditions, with both rocket stages running over wide ranges of power.”, said Dr. Jared P. Squire, Director of Research and leader of the experimental campaign.

Short for Variable Specific Impulse Magnetoplasma Rocket, VASIMR(R) works with plasma, an electrically charged gas that can be heated to extreme temperatures by radio waves and controlled and guided by strong magnetic fields. The magnetic field also insulates any nearby structure so temperatures well beyond the melting point of materials can be achieved. The plasma can be harnessed to produce propulsion. In rocket propulsion, the higher the temperature of the exhaust gases, the higher their velocity and hence the higher their fuel efficiency. Plasma rockets feature exhaust velocities far above those achievable by their chemical cousins, so their fuel consumption is extremely low.