At 3:44 a.m. EDT a SpaceX Falcon 9 rocket with the Dragon spacecraft successfully lifted off from the Cape Canaveral Air Force Space Station launch complex 40 for its maiden voyage to the International Space Station on its second demonstration flight as part of the NASA Commercial Orbital Transportation Services program.
This is the first time a commercial company will attempt to fly to the International Space Station. SpaceX CEO Elon Musk who was tweeting during the launch said “Falcon flew perfectly!! Dragon in orbit, comm locked and solar arrays active!! Feels like a giant weight just came off my back :)”

Indeed, as not only was the commercial space sector looking at SpaceX for success, but SpaceX’s future is very much dependant on the success of this and upcoming launches. While SpaceX customers have been very supportive and while the company is now almost 10 years old, SpaceX is very much the new kid on the block with a lot to prove. Today’s successful launch will go a long way for its credibility.

This is the third launch attempt for the Falcon 9 and all have successfully reached orbit. However while the launch was successful there are still many milestones ahead of SpaceX on this mission.

During the mission, Dragon must perform a series of complex tasks, each presenting significant technical challenges.

– Day 1/Launch Day: SpaceX’s Falcon 9 rocket launches a Dragon spacecraft into orbit from the Cape Canaveral Air Force Station.
– Day 2: Dragon orbits Earth as it travels toward the International Space Station.
– Day 3: Dragon’s sensors and flight systems are subject to a series of complicated tests to determine if the vehicle is ready to berth with the space station; these tests include maneuvers and systems checks that see the vehicle come within 1.5 miles of the station.
– Day 4: NASA decides if Dragon is allowed to attempt to berth with the station. If so, Dragon approaches; it is captured by station’s robotic arm and attached to the station. This requires extreme precision even as both Dragon and station orbit the earth every 90 minutes.
– Day 5 – TBD: Astronauts open Dragon’s hatch, unload supplies and fill Dragon with return cargo.
– TBD: After approximately two weeks, Dragon is detached from the station and returns to Earth, landing in the Pacific, hundreds of miles west of Southern California. 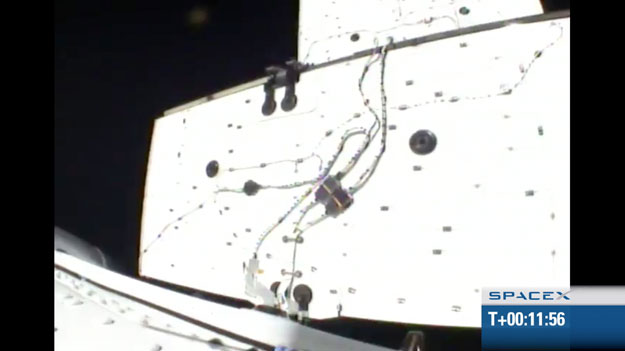 The White House released a statement on the launch this morning from John P. Holdren, Assistant to the President for Science and Technology:

“Congratulations to the teams at SpaceX and NASA for this morning’s successful launch of the Falcon 9 rocket from Cape Canaveral Air Force Station in Florida. Every launch into space is a thrilling event, but this one is especially exciting because it represents the potential of a new era in American spaceflight. Partnering with U.S. companies such as SpaceX to provide cargo and eventually crew service to the International Space Station is a cornerstone of the President’s plan for maintaining America’s leadership in space. This expanded role for the private sector will free up more of NASA’s resources to do what NASA does best — tackle the most demanding technological challenges in space, including those of human space flight beyond low Earth orbit. I could not be more proud of our NASA and SpaceX scientists and engineers, and I look forward to following this and many more missions like it.”

Should the rest of the mission go as well as the launch, SpaceX will done much to prove the case of the sometimes maligned new commercial space companies.