UPDATED at 3:50 p.m. EST: This morning at 10:10 a.m. EST, a SpaceX Falcon 9 with Dragon spacecraft launched from Space Launch Complex 40 at Cape Canaveral Air Force Station on its second of 12 NASA contracted resupply missions to the International Space Station (ISS).
Less than 24 hours after launching, the SpaceX Dragon was supposed to arrive at the ISS where the station crew would grapple and berth the spacecraft to the ISS for an expected three week visit.

However, after the Dragon spacecraft had separated from the Falcon 9 launch vehicle, and just before the Dragon solar arrays were to deploy, an anomaly occurred with the thrusters where only one of four was enabled. The spacecraft appeared to be in the correct orbit.

SpaceX issued one of two statements shortly after the problem occurred “One thruster pod is running. Two are preferred to take the next step which is to deploy the solar arrays. We are working to bring up the other two in order to plan the next series of burns to get to station.”

After the solar array was deployed SpaceX issued another statement: “Falcon 9 lifted off as planned and experienced a nominal flight. After Dragon achieved orbit, the spacecraft experienced an issue with a propellant valve. One thruster pod is running. We are trying to bring up the remaining three. We did go ahead and get the solar arrays deployed. Once we get at least 2 pods running, we will begin a series of burns to get to station.”

Musk also said that at this time that one possibility for the problem was “some blockage in the oxidizer pressurization” and he said it appears that they were able to free the blockage or the stuck valve by cycling the valves, or as he put it, “hammering the valves”. This cycling of the valves appears to have been effective he went on to say.

The berthing to the ISS will not happen as scheduled early Saturday morning, but could happen sometime on Sunday. However a decision on whether to approach into the safe zone of the ISS has not been made yet. Once SpaceX and NASA are confident that the issue has been resolved, then the decision to approach the ISS will be made. NASA requires three of the four thrusters pods working.

SpaceX was quick to mention that there was no issue with the Falcon 9 rocket itself, which performed well according to Elon Musk.

The Dragon spacecraft is filled with about 1,200 pounds (544kg) of supplies, including supplies to support the 160 scientific investigations that are being performed by station’s Expedition 34 crew. 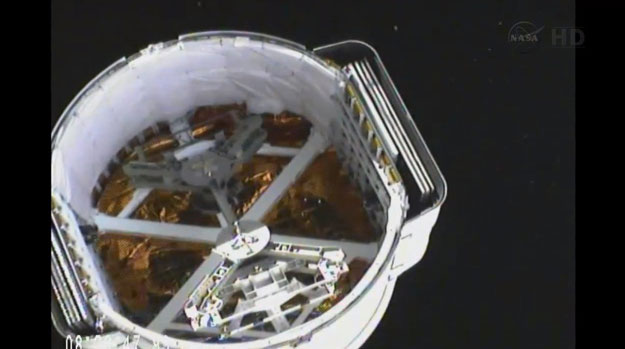 The SpaceX Dragon is scheduled to return with about 2,300 pounds (1043kg) of cargo including important scientific materials, crew supplies and education experiments.

Dragon was scheduled to return to Earth on March 25 with a parachute-assisted splashdown off the coast of Baja California. No new date for a return has been set yet.

5:00 p.m. EST UPDATE: All four thrusters are online and working.

Listen to podcast of the post-launch NASA media teleconference: