The Satellite Industry Association (SIA) today released its 2017 State of the Satellite Industry Report at an industry briefing held in Washington, D.C.
For 20 years, SIA has been publishing the leading analysis of the satellite industry. The industry report produced by Bryce Space and Technology, LLC, is derived from proprietary surveys of satellite companies, in-depth public information, and independent analysis which are combined to assess the performance of key satellite industry sectors including satellite services, ground equipment, launch services and manufacturing. 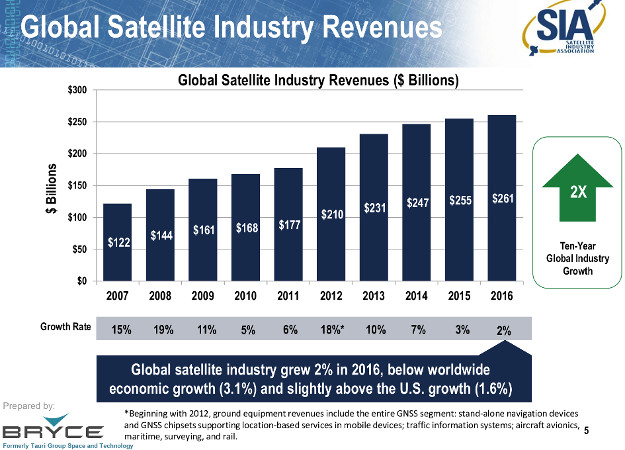 During the year, the growing importance of the industry was once again underlined by both the continued increase in the sheer number of operational satellites in orbit and by the announced plans for new satellites with increased capabilities as well as multiple constellations. By the end of 2016, 1,459 satellites were operational compared with 1,381 at the end of 2015. This represents an increase of 47 percent over the past five years.

“2016 was once again a positive one for the satellite industry with continued overall growth, double digit growth in earth observation revenues and increased growth in navigation revenues,” said Tom Stroup, President of SIA. “Revenue growth along with advancements in satellite broadband and connectivity, plans for both increased space segment capability and a significant rise in the number of orbiting satellites and constellations all demand the need for regulators to fully understand the critical importance of satellites. Investment and innovation rely on lawmakers maintaining a spectrum policy regime that ensures the continued reliable delivery of vital satellite services to customers now, throughout the next decade and beyond.”

The 2017 State of the Satellite Industry Report highlights include the following results:

– Satellite Launch Services Industry revenues, which include revenues for all commercially-competed launches that occurred in 2016, increased by two percent to $5.5 billion after decreasing by nine percent from 2014 to 2015. The U.S. had the largest share of commercially-procured launch revenues (40%), with 32% of global revenues from launching U.S. government satellites. 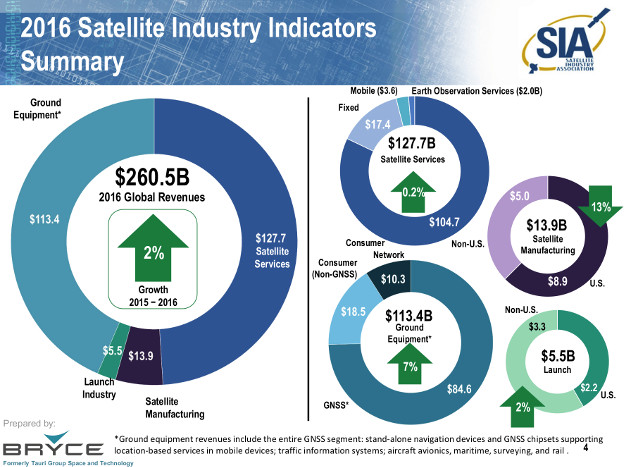 For more information regarding SIA’s State of the Satellite Industry Report, please contact Charity Weeden, Sr. Director of Policy, SIA at [email protected] or via telephone at 202.503.1563.

A copy of the 2017 State of the Satellite Industry Report can be found at the following link:
http://www.sia.org/wp-content/uploads/2017/07/SIA-SSIR-2017_full.pdf

About Bryce Space and Technology
Bryce Space and Technology, formerly Tauri Group Space and Technology, is an analytic consulting firm that helps clients turn technology into mission and business success. Our integrated team of analysts have career-long expertise in space, cyber, and advanced R&D. Unlike management consulting generalists, our domain focus enables us to offer our clients cutting-edge expertise and data. Our proprietary, research-based models predict critical outcomes in space and technology – satellite market share, launch pricing, technology forecasting accuracy, and the cost of moving up the TRL scale to name just a few. We apply interdisciplinary analytic skills combined with deep domain knowledge of complex technology industries to meet the needs of government and commercial clients.

We believe industry leaders and policy makers require objective, data-driven analysis, free of vested interests and preconceptions, to make the right decisions. Bryce cultivates a culture of engagement and partnership with our clients, whose success we take personally.
www.brycetech.com
Twitter: https://twitter.com/BryceSpaceTech
LinkedIn: https://www.linkedin.com/company/bryce-space-tech