– U.S. Satellite Industry Employment decreased by 1% in the first three quarters of 2011, a net loss of 2,169 jobs. The pace of job losses slowed compared to the prior year, which saw a 2.7% drop in U.S. satellite industry employment. The SIA will release updated employment numbers in August 2012, when the U.S. Bureau of Labor Statistics issues 4Q 2011 employment data.

The report indicates the global space industry revenue in 2011 at $298.8 billion of which $177.3 billion is the satellite industry and the overall global telecommunications industry is $4.23 trillion. 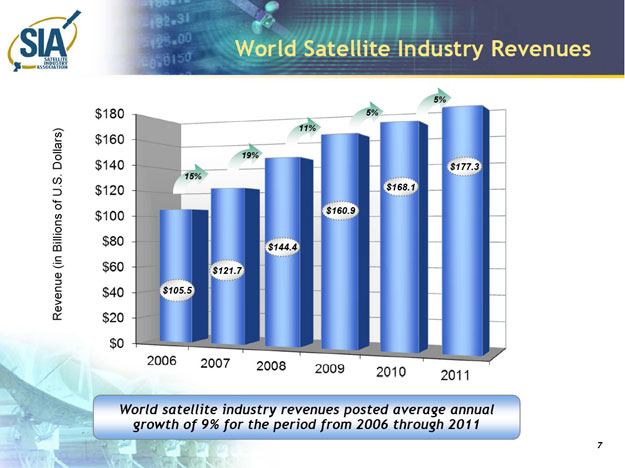 “The global satellite industry posted notable growth in 2011, a strong showing in light of the worldwide economic environment,” noted Patricia Cooper, President of SIA. “All four industry sectors grew, led by satellite services, which continues to be the primary demand driver for satellite manufacturing, launch industry, and ground equipment activity. Worldwide satellite industry revenues have shown an average annual growth rate of 9% over the past five years, demonstrating the ongoing resilience of the industry. SIA and its members remain committed to advocating for policies that will allow our entire industry to thrive and ensure the critical services it supplies.”