Planet Labs, a space and analytics company, announced plans to launch the world’s largest fleet of Earth imaging satellites to image the changing planet and provide open access to that information. Today, they revealed the first images from their first two satellites.
Planet Labs’ goal is to provide universal access to information about the changing planet. The company plans to achieve this by launching a fleet of Earth imaging satellites, called ‘Doves’, that when acting together can provide a new image of the planet at an unprecedented combination of resolution and frequency. To best enable this mission, the company has selected a low orbit for its constellation and an optical resolution of three to five meters – a scale that allows measurement of a tree canopy, but does not compromise individual privacy. This will enable monitoring of deforestation, help improve agricultural yields, track natural disasters and many other applications.

“Planet Labs will create an entirely new data set, with both humanitarian and commercial value,” said Tim O’Reilly of O’Reilly AlphaTech Ventures. “We’ve become used to having imagery of the entire Earth. What we haven’t yet understood is how transformative it will be when that imagery is regularly and frequently updated.” Everyone from ecologists to citizen journalists will be able to track frequent changes to any place on the planet — a frequency and coverage greater than ever seen before.

“We’re seeing unprecedented innovation in the space industry, starting with SpaceX lowering the cost of access, and now with Planet Labs revolutionizing the satellite segment,” said Steve Jurvetson, Managing Director of Draper Fisher Jurvetson (DFJ) and member of the company’s Board of Directors. “As Planet Labs’ first outside investor, we are delighted to help the company execute on their unique vision to make the big data landscape of the planet more accessible.”

A selection of images from the company’s first two demonstration satellites, “Dove 1” and “Dove 2,” launched in April 2013, are available on http://www.planet-labs.com . These demonstration missions extended the company’s lab into space, and successfully validated key technologies and operations to enable future systems. Data from the upcoming fleet of satellites are scheduled to be available early next year. The company is engaging with select partners and customers to ensure the data service can easily be utilized for both humanitarian and commercial purposes.

Editor’s note: The Dove satellites developed and launched by Planet Labs (formely named Cosmogia) are based on the Cubesat format and manifested as such on the Antares rocket. Planet Labs has declined to provide images of the spacecraft or descriptions of their design and operations. See “Spaceflight Successfully Deploys Five Spacecraft Launched by Two Launch Vehicles from Two Continents“: “The Bion-M1 also transported several secondary passengers, one of which is a Spaceflight 3U ISIPOD carrying the Dove-2 spacecraft, a 3U CubeSat made by Cosmogia Inc. The launch was arranged in a cooperation between Spaceflight Inc and ISIS’ subsidiary Innovative Space Logistics (ISL). ISL was responsible for the execution of the launch campaign.” 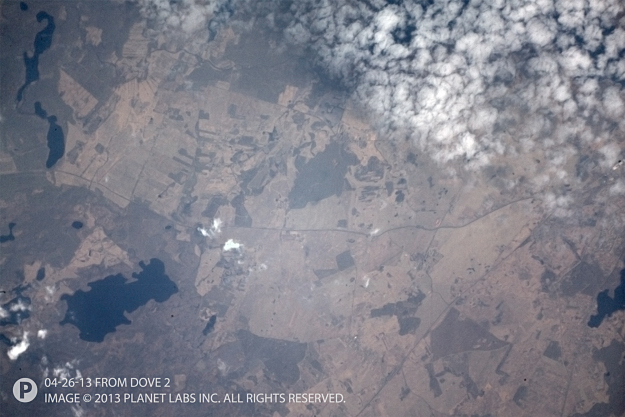 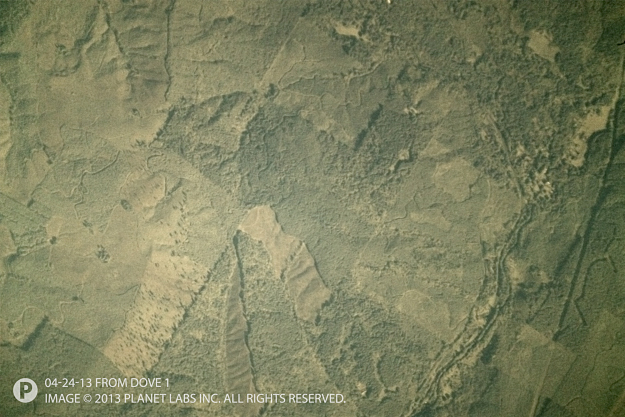 – Planet Labs is providing unique coverage and cadence. Rather than the traditional model of point and shoot imaging based on targets from high paying customers, Planet Labs has an always-on space platform that enables large coverage and frequently updated imagery. This, combined with the large number of satellites in its constellation, will give the world an entirely new data set allowing us to regularly monitor the changing planet and make better decisions to live here in a sustainable way. We believe our ‘always on’ model will be complementary to the existing high-resolution reconnaissance market with a myriad of potential applications.

– Planet Labs has built and launched advanced small Earth observation satellites; and is in early 2014 launching a fleet of 28 Earth imaging satellites, largest constellation of Earth imaging satellites ever launched, to offer frequent images of the globe. By providing high-resolution imagery regularly, Planet Labs will expand dramatically the customer base for Earth imagery and the use of that information to address humanitarian, environmental and commercial concerns. We employ an agile development philosophy in all elements of the company, including satellites as we extend our laboratory into the space environment.

– Planet Labs has selected an optical resolution of three to five meters – a scale that allows measurement of a tree canopy, but does not compromise individual privacy. We are committed to mitigating effects on personal privacy while allowing those that care about land-use change detection in near real-time unparalleled access to actionable information.

– Planet Labs’ founders, Robbie Schingler, William Marshall and Chris Boshuizen, are physicists and entrepreneurs who previously worked at NASA. They first met at an international conference that gathered young professionals to make policy recommendations on how space can benefit humanity. They have a shared motivation to use space to help humanity and other life. The founders have been collaborating for a dozen years on projects that intersect space and societal benefit. They all three worked on small scientific satellites at NASA Ames; Marshall and Boshuizen started and led the PhoneSat project; Marshall worked on the lunar missions LCROSS and LADEE; Schingler worked on the exoplanet mission TESS. Schingler also worked at NASA HQ where he helped to incubate NASA’s Space Technology program.