Today, at NASA’s direction, Orbital Sciences Corporation has postponed the launch of our commercial cargo resupply mission to the International Space Station.

The space agency will proceed with a series of spacewalks to replace a faulty pump module on the ISS. The Antares rocket that is currently on the launch pad at Wallops Island, Virginia, will be returned to a horizontal position and transported back to the Horizontal Integration Facility (HIF). At the HIF, the Antares payload fairing will be removed to allow the Cygnus team to open the payload module hatch and remove time-critical payloads for safekeeping until the next launch attempt, which will occur no earlier than January 13, 2014.

The Antares is scheduled to launch a Cygnus spacecraft on a cargo resupply mission to the International Space Station on Thursday, Dec. 19 at 9:19 p.m. EST. The Orbital-1 mission is Orbital Sciences’ first contracted cargo delivery flight to the space station for NASA. Among the cargo aboard Cygnus set to launch to the space station are science experiments, crew provisions, spare parts and other hardware. Weather permitting, it may be widely visible along the east coast of the United States. > Map of Orbital-1 Launch Viewing 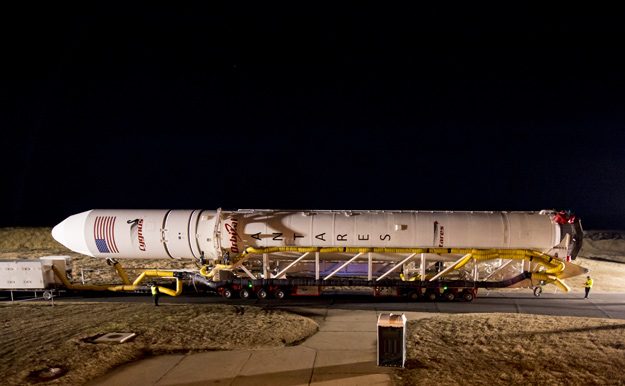