Northrop Grumman Corporation and teammate ATK have completed manufacturing of the backplane support frame (BSF) for NASA’s James Webb Space Telescope. Northrop Grumman is under contract to NASA’s Goddard Space Flight Center in Greenbelt, Md., for the design and development of the Webb Telescope’s optics, sunshield and spacecraft.
When combined with the center section and wings, the BSF will form the primary mirror backplane support structure (PMBSS). In March 2013, the backplane’s two wings were completed. The center section was completed in April 2012. The BSF is now being integrated with the previously completed center section to form the complete backplane.

The PMBSS is the stable platform that holds the telescope’s beryllium mirrors, instruments and other elements. It holds the 18-segment, 21-foot-diameter primary mirror nearly motionless while the telescope is peering into deep space. The backplane support frame is the backbone of the observatory, is the primary load carrying structure for launch, and holds the science instruments.

“This is the largest optically stable cryostructure that has ever been built,” said Gregory Young, Acquisition manager for Northrop Grumman. “With the completion of the frame, the structural backbone of the observatory is now ready for integration.”

Measuring approximately 24 ft. tall by 19.5 ft. wide by more than 11 ft. deep when fully deployed, and weighing only 2,180 lbs., the fully assembled primary mirror backplane support structure will include the wing assemblies, the center section and the BSF. This fully populated PMBSS will support the mission payload and instruments weighing more than 7,300 lbs., or more than 300 percent its own weight. 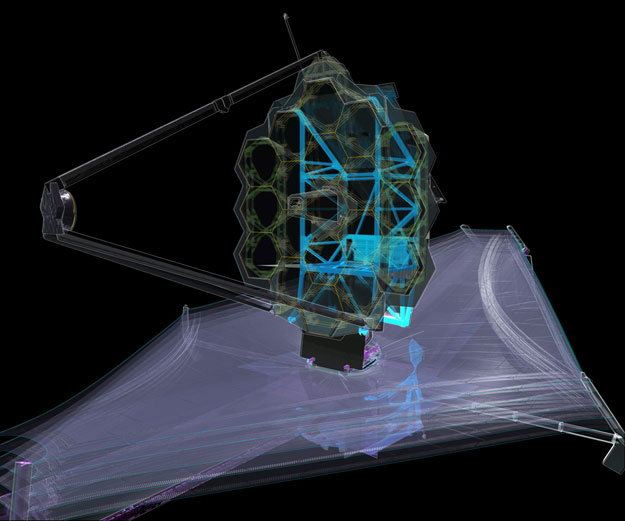 This x-ray diagram of NASA’s James Webb Space Telescope shows where the backplane support frame (BSF) is in relation to the whole observatory. The BSF is the backbone of the observatory, is the primary load carrying structure for launch, and holds the science instruments. Photo Credit: Northrop Grumman.

The highly efficient PMBSS will also meet unprecedented thermal stability requirements to minimize thermal distortion. While the telescope is operating at a range of extremely cold temperatures, from -406 to -343 degrees Fahrenheit, the backplane must not vary more than 38 nanometers (approximately 1/1,000 the diameter of a human hair). For reference, if the mirror were enlarged to span from Los Angeles to New York City, the tolerance for error would be less than 1 inch.

The BSF was designed and fabricated at ATK facilities in Magna, Utah. ATK designed, engineered and constructed the more than 10,000 parts of the entire PMBSS using lightweight graphite materials, state-of-the-art material sciences and advanced fabrication techniques. The composite parts attach in many cases to precision metallic fittings, made of materials such as invar and titanium that provide interfaces with other elements of the observatory.

“It is truly inspiring to participate in ideas that lead to invention and finally this fantastic reality of the PMBSS assembly,” said Bob Hellekson, ATK’s Webb Telescope program manager. “It continues to be a privilege and an honor for the ATK team to provide program hardware that is arguably the largest and most advanced cryogenic structure ever built.”

ATK has begun final integration of the BSF to the previously completed center section. The newly assembled structure is on track to meet critical path program milestones when it is delivered to Marshall Space Flight Center in Huntsville, Ala. later this summer for the extreme cryogenic thermal testing. The PMBSS will then undergo structural static testing at Northrop Grumman’s facilities in Redondo Beach, Calif. in early 2014 before NASA and Northrop Grumman ready the observatory for its 2018 launch.

The James Webb Space Telescope is the world’s next-generation space observatory and successor to the Hubble Space Telescope. The most powerful space telescope ever built, the Webb Telescope will observe the most distant objects in the universe, provide images of the first galaxies formed and see unexplored planets around distant stars. The Webb Telescope is a joint project of NASA, the European Space Agency and the Canadian Space Agency.