Moon Express, Inc. (MoonEx) has announced a multi-mission payload agreement with The National Laboratories of Frascati (INFN-LNF) and the University of Maryland to deliver a new generation of lunar laser ranging arrays to the Moon.
Under the agreement, “MoonLIGHT” instruments will be carried on the first four Moon Express missions and used in conjunction with Apollo Cube Corner (CCR) Retroreflector arrays to test principles of Einstein’s General Relativity theory, add to international scientific knowledge of the Moon, and increase lunar mapping precision that will support the company’s future lander missions.

The payload announcement was made today in Frascati, Italy, right after the European Lunar Symposium, during a Global Exploration Roadmap workshop of the International Space Exploration Coordination Group (ISECG), attended by officials national space agencies and lunar scientists from around the world.

“Our next generation lunar laser ranging arrays offer a promising way to test general relativity and other theories of gravity,” said Professor Doug Currie. “Our agreement with Moon Express allows us to get our instruments to the Moon cost effectively and potentially revolutionize our understanding of gravity.” Professor Currie of the University of Maryland was the principle scientist responsible for the Apollo arrays that provided the first validations of the use of lunar-based mirrors for cosmology.

“These tests reach to the core foundational principles of general relativity,” said Dr. Simone Dell’Agnello of The National Laboratories of Frascati. “Any detected violation would require a major revision of current theoretical understanding of the way the universe works.” The National Laboratories of Frascati (LNF) is part of The National Institute of Nuclear Physics (INFN), and is co-developer of the “MoonLIGHT” instruments and partner in the Moon Express payload agreement. 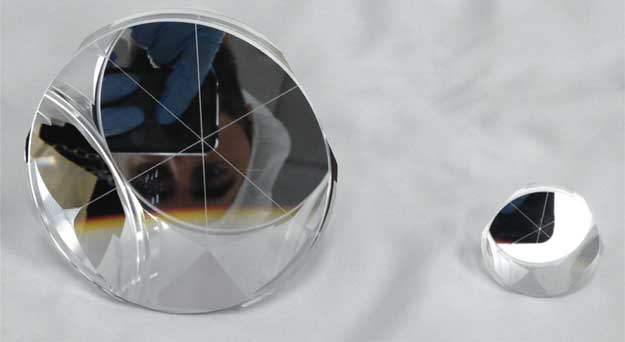 The MoonLIGHT development is a collaboration of the University of Maryland and the Frascati branch (LNF) of the Institute for Nuclear Physics (INFN) of Italy. Other Italian partners are the Matera Laser Ranging Observatory of ASI and the University of Padova. The joint effort has addressed the design, analysis, thermal and optical simulation, fabrication and thermal-vacuum optical testing of a concept for the lunar array that will travel to the Moon aboard the Moon Express MX-1 lunar landers, with an initial technology demonstrator mission planned for 2017.

“The MoonLIGHT arrays are beautiful payloads for us,” said Bob Richards, Moon Express co-founder and CEO. “It’s amazing to think that Moon Express could help solve fundamental science questions of cosmology while furthering knowledge of the Moon that helps our future missions with this series of elegant and relatively low cost payloads.”

Moon Express is contributing $12M to the overall $24M cost of the agreement spanning four missions, reinforcing the value of a strong public-private cost-sharing approach to lunar exploration. “We are making this investment to support our customer and contribute to fundamental science of the Moon and our universe,” said Naveen Jain, Moon Express co-founder and chairman. “The establishment of a network of new-generation laser retroreflectors on the Moon is also a good business investment into lunar infrastructure for our future missions.”

Moon Express began flight-testing of its MTV-1 lander test vehicle at Kennedy Space Center in December 2014. The company recently announced an agreement with Space Florida to take over the historic Space Launch Complex 36 at Cape Canaveral to become the home of its lunar lander development and flight test operations beginning early this year.

(MoonEx) is a privately funded commercial space company driven by long-term goals of exploring and developing lunar resources and short-term business on-ramps of providing lunar transportation and data services for government and commercial customers. The company has developed the “MX”-family of scalable single stage spacecraft/landers capable of reaching the lunar surface from Earth orbit on direct or low-energy trajectories. The company is partnered with NASA and in 2010 was awarded a commercial lunar data purchase contract worth up to $10M. Moon Express is also a leading contender in the $30M Google Lunar XPRIZE competition for the first private company to land safely on the surface of the Moon, travel 500 meters above, below, or on the Lunar surface, and send back two “Mooncasts” to Earth. In 2014, Moon Express selected by the Google Lunar XPRIZE Judging Panel as one of only two teams qualified to compete in the lander, mobility and imaging categories of the competition’s $6M Milestone Prizes challenge.

The Moon Express founders, Dr. Robert (Bob) Richards, Naveen Jain, and Dr. Barney Pell, believe in the long term economic potential of the Moon to produce resources essential to humanity’s future on Earth and in space.

The National Institute of Nuclear Physics (INFN) is the Italian organization devoted to the study of the fundamental constituents of matter, and carries out experimental and theoretical research in the fields of subnuclear, nuclear, and astroparticle physics. The INFN National Laboratory of Frascati (LNF) was founded in 1954 to host the 1.1 GeV electrosynchrotron, the first accelerator ever built in Italy, to further the particle physics research. Fundamental research in these areas requires the use of cutting-edge technologies and instrumentation, which the INFN develops both in its own laboratories and in collaboration with the world of industry. Moreover, the INFN promotes the application of the skills, methods, and experimental techniques developed in the course of its own research to research in other fields, such as medicine, artistic preservation, environmental protection and space research and exploration. These activities are carried out in close collaboration with the Italian Universities.

ABOUT THE UNIVERSITY OF MARYLAND

The University of Maryland is a public research university, the flagship campus of the University System of Maryland, and the original 1862 land-grant institution in the State. It is one of 63 members of the Association of American Universities, an organization composed of the leading research universities in the United States and Canada. The University creates and applies knowledge, providing outstanding instruction and nourishing a climate of intellectual growth in a broad range of academic disciplines and interdisciplinary fields. As a land-grant institution, the University shares its research, educational, cultural, and technological strengths with the Maryland citizenry and other constituencies. Its collaborations with State, federal, private and non-profit partners promote economic development and improve quality of life.