A rocket-powered, vertical-landing space-access technology demonstrator reached its highest altitude and furthest distance to date March 25 at the Mojave Air and Space Port in Mojave, Calif., using a developmental navigation system designed to land a space vehicle on other celestial bodies.

This combined capability of a rocket-powered demonstrator and a closed-loop planetary Guidance, Navigation and Control system allows NASA to begin testing prototype landing instruments for future missions to the Moon or Mars under realistic conditions without leaving Earth.

“Two hundred meters above the Martian or lunar surface is not the place you want to be using an innovative new sensor or landing algorithm for the first time,” explained Christopher Baker of the Flight Opportunities Program at NASA’s Dryden Flight Research Center at Edwards Air Force Base. “We are working to create an environment that provides opportunities to test these systems a little closer to home.”

Masten Space Systems’ Xombie space-access technology demonstrator lifts off on its highest and longest flight to date, guided by Draper Lab’s GENIE navigation and control system. › View Larger Image Xombie rose 1,626 feet, or nearly 500 meters – higher than New York’s Empire State Building – moving in a trajectory that replicated the speed and angle of a planetary approach. It landed 984 feet, nearly 300 meters, away from the take off site. The flight established a test-bed capability that will allow for landing demonstrations that start at much higher altitudes – several miles above the ground.

“While computer simulations provide some value as systems are developed, testing that system in a relevant flight environment is invaluable,” said Colin Ake, Masten’s director of business development. “We want our vehicles to facilitate innovation and lower the current barriers to space access. We hope this is just the beginning of many more landing tests for NASA and Draper.” 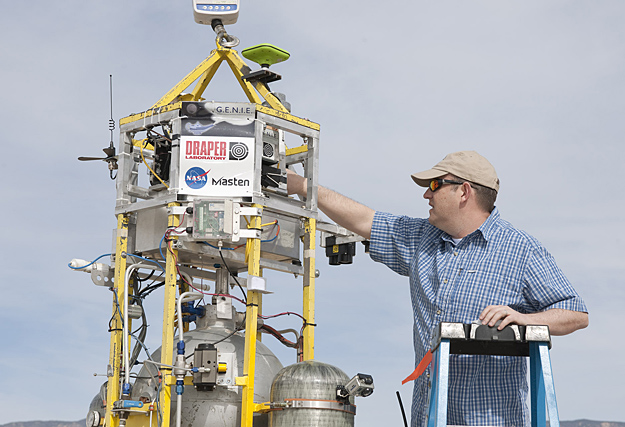 Draper, based in Cambridge, Mass., was selected to lead this engineering and integration demonstration effort. Draper subsequently teamed with Masten, based in Mojave, to provide the vertical takeoff and landing flight vehicle to demonstrate this new landing technology. Flight safety and assurance monitoring was performed by Masten’s Senseia>=c software during flight.

“Draper is excited to be a part of a team that demonstrated such a unique capability, combining our guidance, navigation and control technology with a proven test flight platform like Xombie,” said Doug Zimpfer, Draper’s associate director for human space exploration. “We believe the GENIE and Xombie system provide NASA with the platform necessary to demonstrate a wide range of exciting planetary landing technologies including advanced guidance technology.”

The program facilitates low-cost access to suborbital environments for a broad range of innovators as a means of advancing space technology development and supporting the evolving entrepreneurial commercial space industry.

The Space Technology Mission Directorate will develop the cross-cutting, advanced and pioneering new technologies needed for NASA’s current and future missions, many of which also benefit America’s aerospace industries, other government agencies, and address national needs.