ATK today announced an expanded product line of small, agile satellite buses designed for a wide range of missions in civil, national security and commercial applications.
Designed to meet the growing demand for affordable small spacecraft with dependably fast delivery, ATK’s family of agile buses are built for both near-term and long-term markets. ATK’s demonstrated expertise in the small satellite industry with nearly three decades of experience in government and commercial space programs has resulted in a premier product line that has grown over the past few years to address the changing space market. The Company’s demonstrated capability to build small satellites quickly and effectively positions ATK as a leader in new space markets that include science and Earth observation small satellites and complex on-orbit satellite servicing missions.

“Our expanded family of space platforms will enable us to capitalize on the up-swing we expect to see in a number of our targeted market segments. Our diversified, balanced approach across multiple markets will take best advantage of the increase in microsat missions, continued demand for small, rapidly-developed spacecraft and the game-changing, on-orbit satellite servicing market,” said Tom Wilson, Vice President and General Manager, ATK Space Systems Division. “We intend to build on our 100-percent on-orbit mission success rate by aggressively opening markets for new capabilities across all space sectors – military, intelligence, civil, commercial and international.”

The ATK A series product line consists of four basic configurations, A100, A200, A500, and A700, with elevated platforms of A150, A250, and A550 for broader capability and flexibility for customers. The products are designed for a range of mission requirements based on mission class, design life, propulsion, pointing accuracy, payload mass and launch compatibility. The ATK A series is also compatible with most launch vehicles.

The ATK A100 is ATK’s small bus offering within the product line for microsats and nanosats. The configuration is primarily for missions requiring payloads less than 15kg. Used in the highly successful NASA THEMIS mission, two of the five microsatellites originally built were redirected to new orbits around the Moon for a new mission re-named ARTEMIS. 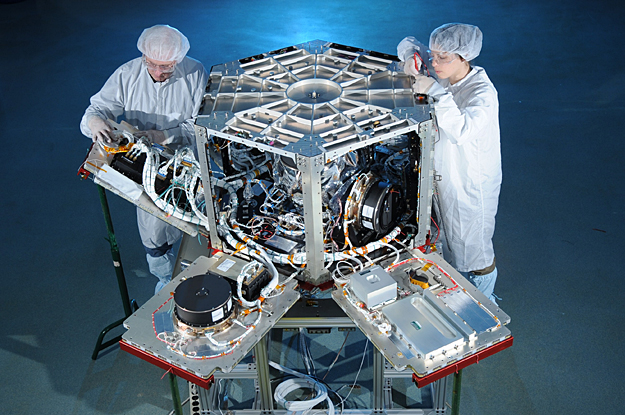 The ATK A200 series features ATK’s celebrated Responsive Space Modular Bus (RSMB), which provides considerable power, precision pointing and significant data throughput for sophisticated military and scientific payloads. The platform is currently in flight on two missions: NASA’s Earth Observing-1 (E0-1) satellite, now in operation for over 10 years, and the Department of Defense’s Operationally Responsive Space-1 (ORS-1) satellite in orbit for over a year. The platform was also used for the military’s TacSat-3 mission which ended in April 2012, after nearly three years, well past its original six-month mission life. 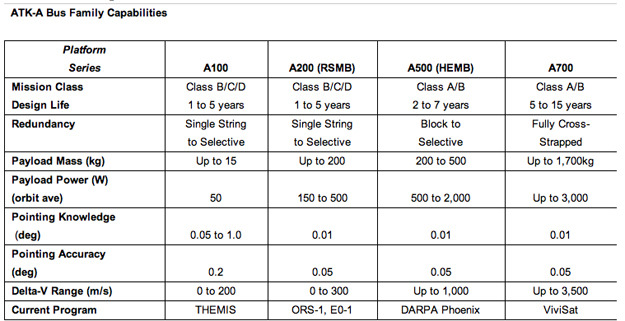 The ATK A500 series offers a High End Modular Bus (HEMB) that provides the technology needed for the most intricate missions, and allows for increased payload complexity and size, as well as extended life. The HEMB is the platform selected for the revolutionary DARPA Phoenix mission to conduct on-orbit satellite servicing and repurposing.

The ATK A700 series bus is the largest mission class, with the longest design life and biggest capacity. The A700 is the foundation of the ViviSat Mission Extension Vehicle (MEV), a significant new satellite servicing spacecraft capable of docking with a client satellite and providing an alternative attitude control and propulsion system for satellites out of fuel but with functioning payloads. The MEV was introduced in 2011 when ATK and its partner, U.S. Space LLC, launched “ViviSat,” the first U.S.-based company to offer satellite life extension services to commercial and government geosynchronous satellite operators. A video of the ViviSat service featuring the MEV is available at www.atk.com.

ATK is an aerospace, defense and commercial products company with operations in 21 states, Puerto Rico and internationally. News and information can be found on the Internet at www.atk.com.

Certain information discussed in this press release constitutes forward-looking statements as defined in the Private Securities Litigation Reform Act of 1995. Although ATK believes that the expectations reflected in such forward-looking statements are based on reasonable assumptions, it can give no assurance that its expectations will be achieved. Forward-looking information is subject to certain risks, trends and uncertainties that could cause actual results to differ materially from those projected. Among those factors are assumptions regarding growth in the market for small satellite spacecraft platforms; changes in governmental spending, budgetary policies and product sourcing strategies; the company’s competitive environment; the terms and timing of awards and contracts; and economic conditions. ATK undertakes no obligation to update any forward-looking statements. For further information on factors that could impact ATK, and statements contained herein, please refer to ATK’s most recent Annual Report on Form 10-K and any subsequent quarterly reports on Form 10-Q and current reports on Form 8-K filed with the U.S. Securities and Exchange Commission.