The Shocking Environment of Hot Jupiters 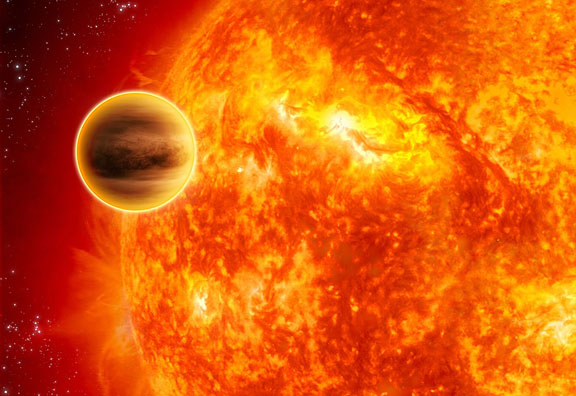 Jupiter-like worlds around other stars push shock waves ahead of them, according to a team of U.K. astronomers. Just as the Earth’s magnetic “bow-shock” protects us from the high-energy solar wind, these planetary shocks protect their atmospheres from their star’s damaging emissions. Team leader Dr. Aline Vidotto of the University of St. Andrews will present a new model based on observations made with the SuperWASP (Wide Angle Search for Planets) project on Monday 18 April at the National Astronomy Meeting in Llandudno, Wales.

Jupiter-like worlds around other stars push shock waves ahead of them, according to a team of U.K. astronomers. Just as the Earth’s magnetic “bow-shock” protects us from the high-energy solar wind, these planetary shocks protect their atmospheres from their star’s damaging emissions. Team leader Dr. Aline Vidotto of the University of St. Andrews will present a new model based on observations made with the SuperWASP (Wide Angle Search for Planets) project on Monday 18 April at the National Astronomy Meeting in Llandudno, Wales.

In 2008, observations of WASP-12 detected a periodic dip in light as a large planet (catalogued as WASP-12b) passed in front of its host star. Planet hunting with transit instruments like SuperWASP allows astronomers to obtain a wealth of information about exoplanetary systems including their composition and size.

WASP-12b turns out to be one of the largest exoplanets found to date and completes each orbit around its parent star in just 26 hours. The planet is more than 250,000 km across, with its atmosphere swollen by the intense heat it receives from the star, making it a so-called ‘hot Jupiter’.

Hot Jupiters are similar to the planet Jupiter in our own Solar System but located far closer to their host star (WASP-12b is 3.4 million km away from WASP-12 which compares with the Earth-Sun distance of 150 million km). With such a small distance between them violent interactions between the star and the planet can take place.

As one of the largest hot Jupiters discovered to date, WASP-12b also gives a unique opportunity to observe the interactions between the planetary magnetic field and the host star’s magnetic field. The very presence of a magnetic field reveals that the planet must have a conducting, rotating interior.

There is now tantalizing new evidence from Hubble Space Telescope data that a magnetosphere exists around WASP-12b. Observations of the planet taken in ultraviolet wavelengths by a team including scientists from the Open University reveal that the start of the dip in the light from the star during the transit of the planet is earlier in ultraviolet than visible light. Originally, this was thought to be caused by material flowing from the planet onto the star. The St. Andrews group have however determined that the planet ploughs into a supersonic headwind and pushes a shock ahead it — just like the one around a supersonic jet aircraft.

The St. Andrews astronomers carried out simulations of a planet and its bow shock transiting a star and by investigating various shock geometries, orientations and densities have reproduced the dip in ultraviolet light observed in WASP-12b.

Dr. Aline Vidotto commented on the new result. “The location of this bow shock provides us with an exciting new tool to measure the strength of planetary magnetic fields. This is something that presently cannot be done in any other way.”

Joe Llama, a PhD student who carried out the simulations of the bow shock, said, “Our models are able to reproduce the data from the Hubble Space telescope for a range of wind speeds implying that bow shocks could be far more commonplace than had been thought.”

Bow shocks may also protect the atmospheres of hot Jupiters from their harsh environment. These planets are constantly bombarded with highly charged, energized particles from the wind from their parent stars, meaning that their atmosphere can be eroded. The presence of a magnetic field could greatly reduce the amount of stellar wind the planet is exposed to, effectively acting as a shield and helping the atmosphere survive.

Joe Llama concludes, “Although our model predicts a bow shock similar to that of the Earth, we are not expecting any messages from WASP-12b as it is too hot to support life. But the first hints that extrasolar planets have magnetosphere is a big step forward in understanding and identifying the habitable zones where we ultimately hope to find signs of life”.

An artist’s impression of WASP-12b is available from the European Space Agency. See http://www-star.st-and.ac.uk/~jl386/shocks/

An animation of WASP-12b and its bow shock moving in front of the star WASP-12 can be downloaded from http://star-www.st-andrews.ac.uk/~jl386/shocks/

Bringing together around 500 astronomers and space scientists, the RAS National Astronomy Meeting 2011 (NAM 2011: http://www.ras.org.uk/nam-2011) takes place from 17 to 21 April in Venue Cymru (http://www.venuecymru.co.uk), Llandudno, Wales. The conference is held in conjunction with the U.K. Solar Physics (UKSP: http://www.uksolphys.org) and Magnetosphere Ionosphere and Solar-Terrestrial Physics (MIST: http://www.mist.ac.uk) meetings. NAM 2011 is principally sponsored by the RAS and the Science and Technology Facilities Council (STFC: http://www.stfc.ac.uk).

The Royal Astronomical Society (RAS: http://www.ras.org.uk), founded in 1820, encourages and promotes the study of astronomy, solar-system science, geophysics, and closely related branches of science. The RAS organizes scientific meetings, publishes international research and review journals, recognizes outstanding achievements by the award of medals and prizes, maintains an extensive library, supports education through grants and outreach activities, and represents U.K. astronomy nationally and internationally. Its more than 3,500 members (Fellows), a third based overseas, include scientific researchers in universities, observatories, and laboratories as well as historians of astronomy and others.

The Science and Technology Facilities Council

The Science and Technology Facilities Council (STFC: http://www.stfc.ac.uk) ensures the U.K. retains its leading place on the world stage by delivering world-class science; accessing and hosting international facilities; developing innovative technologies; and increasing the socio-economic impact of its research through effective knowledge exchange. The Council has a broad science portfolio including astronomy, particle astrophysics, and space science. In the area of astronomy it funds the U.K. membership of international bodies such as the European Southern Observatory.

Venue Cymru (http://www.venuecymru.co.uk) is a purpose-built conference center and theater with modern facilities for up to 2,000 delegates. Located on the Llandudno promenade with stunning sea and mountain views, Venue Cymru comprises a stunning location, outstanding quality, and exceptional value: the perfect conference package.