In 2015, the New Horizons space probe discovered spectacular snowcapped mountains on Pluto, which are strikingly similar to mountains on Earth.
Such a landscape had never before been observed elsewhere in the Solar System. However, as atmospheric temperatures on our planet decrease at altitude, on Pluto they heat up at altitude as a result of solar radiation. So where does this ice come from? An international team led by CNRS scientists* conducted this exploration. They first determined that the “snow” on Pluto’s mountains actually consists of frozen methane, with traces of this gas being present in Pluto’s atmosphere, just like water vapour on Earth.

Then, to understand how the same landscape could be produced in such different conditions, they used a climate model for the dwarf planet, which revealed that due to its particular dynamics, Pluto’s atmosphere is rich in gaseous methane at altitudes. As a result, it is only at the peaks of mountains high enough to reach this enriched zone that the air contains enough methane for it to condense. 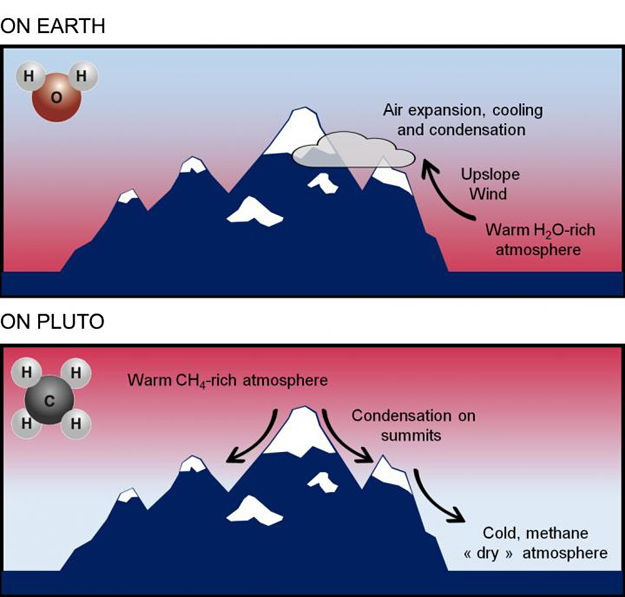 On Earth snow condenses at altitude because air dilates during ascending movements, and thus cools (at the rate of 1°C approximately every 100 m). On Pluto, methane ice forms on the peaks of mountains when they are high enough to reach upper atmospheric levels, which are hotter and rich in methane. CREDIT Tanguy Bertrand et al.

At lower altitudes the air is too low in methane for ice to form. This research, published in Nature Communications, could also explain why the thick glaciers consisting of methane observed elsewhere on Pluto bristle with spectacular craggy ridges, unlike Earth’s flat glaciers, which consist of water.