Gigantic groundwater outbursts created the largest flood channels in the solar system on Mars, 3.2 billion years ago.
For many years it was thought that this was caused by the release of water from a global water table, but research led by J. Alexis P. Rodriguez of the Planetary Science Institute reveals regional deposits of sediment and ice emplaced 450 million years earlier to be the source.

“The flooding is due to regional processes, not global processes,” said Rodriguez, a Senior Scientist at the Planetary Science Institute and lead author of “Martian outflow channels: How did their source aquifers form, and why did they drain so quickly?” that appears in a Nature Scientific Report [http://www.nature.com/articles/srep13404]. “Deposition of sediment from rivers and glacial melt filled giant canyons beneath a primordial ocean contained within the planet’s northern lowlands. It was the water preserved in these canyon sediments that was later released as great floods, the effects of which can be seen today.”

The canyons filled, the Martian ocean disappeared, and the surface froze for approximately 450 million years. Then, about 3.2 billion years ago, lava beneath the canyons heated the soil, melted the icy materials, and produced vast systems of subterranean rivers extending hundreds of kilometers. This water erupted onto the now-dry surface in giant floods.

“Our investigation suggests that early Mars sedimentation could have buried and trapped enormous volumes of surface water, perhaps triggering the transition into the frozen world that Mars has been during most of its history,” Rodriguez said. “Evidence for ancient environments capable of sustaining Earth-like life forms could be present in subsurface materials that are now exposed.”

“Because the process of deposition, freezing, heating and eruption were regional, there may be vast reservoirs of water ice that are still trapped beneath the Martian surface along the boundaries of its ancient northern ocean as well as within the subsurface of other regions of the planet where contemporaneous seas and lakes formed,” he said. “This could be critical to the future of human activity on Mars.” 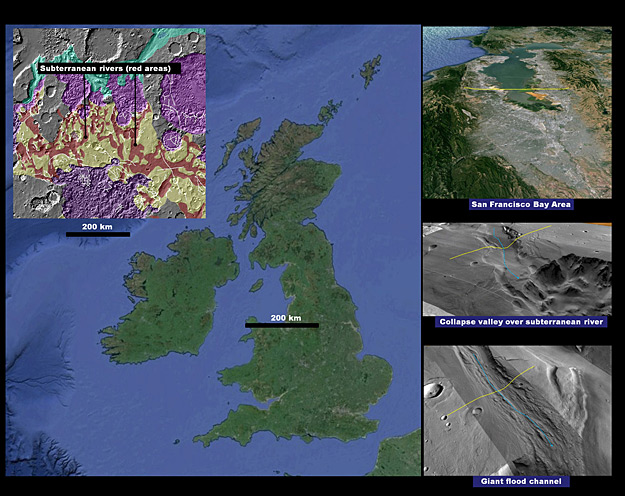 This research was partly funded by a grant to PSI from NASA’s Planetary Geology and Geophysics Program. The Planetary Science Institute is a private, nonprofit 501(c)(3) corporation dedicated to solar system exploration. It is headquartered in Tucson, Arizona, where it was founded in 1972. PSI scientists are involved in numerous NASA and international missions, the study of Mars and other planets, the Moon, asteroids, comets, interplanetary dust, impact physics, the origin of the solar system, extra-solar planet formation, dynamics, the rise of life, and other areas of research. They conduct fieldwork on all continents around the world. They also are actively involved in science education and public outreach through school programs, children’s books, popular science books and art. PSI scientists are based in 21 states and the District of Columbia, and work from various locations around the world.