Scientists have long held the belief that planets – including Earth – were built from rocky asteroids, but new research challenges that view.

Published in Science Advances, a journal of the American Association for the Advancement of Science, the research suggests that many of the original planetary building blocks in our solar system may actually have started life, not as rocky asteroids, but as gigantic balls of warm mud.

Phil Bland, Curtin University planetary scientist, undertook the research to try and get a better insight into how smaller planets, the precursors to the larger terrestrial planets we know today, may have come about.

“The assumption has been that hydrothermal alteration was occurring in certain classes of rocky asteroids with material properties similar to meteorites,” Travis said. “However, these bodies would have accreted as a high-porosity aggregate of igneous clasts and fine-grained primordial dust, with ice filling much of the pore space. Mud would have formed when the ice melted from heat released from decay of radioactive isotopes, and the resulting water mixed with fine-grained dust.” 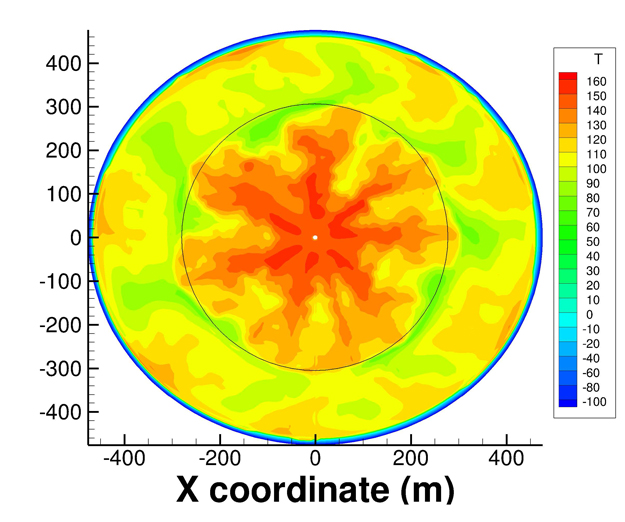 Temperature map as simulated by MAGHNUM as a result of mud convection, in a large asteroid. Temperatures are shown in degrees Celcius.

Travis used his Mars and Asteroids Global Hydrology Numerical Model (MAGHNUM) to carry out computer simulations, adapting MAGHNUM to be able to simulate movement of a distribution of rock grain sizes and flow of mud in carbonaceous chrondrite asteroids.

The results showed that many of the first asteroids, those that delivered water and organic material to the terrestrial planets, may have started out as giant convecting mud balls and not as consolidated rock.

The findings could provide a new scientific approach for further research into the evolution of water and organic material in our solar system, and generate new approaches to how and where we continue our search for other habitable planets.

The research was funded by the Australian Research Council.

Visit http://www.psi.edu/news/asteroidtemp to see examples of temperatures in various model asteroids at a similar stage in their evolution following the onset of convection.

The paper ‘Giant convecting mud balls of the early Solar System’ is available online at http://advances.sciencemag.org/content/3/7/e1602514