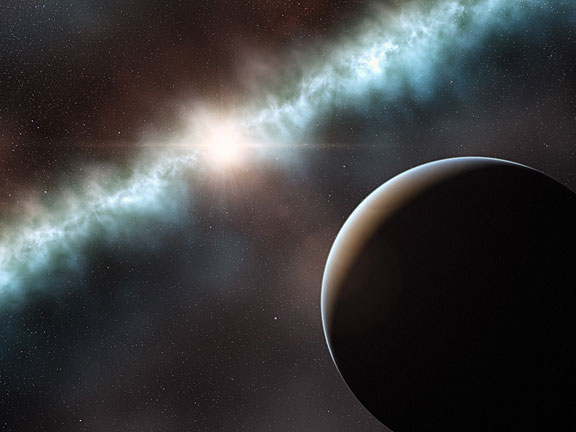 Using ESO’s Very Large Telescope an international team of astronomers has been able to study the short-lived disc of material around a young star that is in the early stages of making a planetary system. For the first time a smaller companion could be detected that may be the cause of the large gap found in the disc. Future observations will determine whether this companion is a planet or a brown dwarf.

Using ESO’s Very Large Telescope an international team of astronomers has been able to study the short-lived disc of material around a young star that is in the early stages of making a planetary system. For the first time a smaller companion could be detected that may be the cause of the large gap found in the disc. Future observations will determine whether this companion is a planet or a brown dwarf.

Planets form from the discs of material around young stars, but the transition from dust disc to planetary system is rapid and few objects are caught during this phase [1]. One such object is T Chamaeleontis (T Cha), a faint star in the small southern constellation of Chamaeleon that is comparable to the Sun, but very near the beginning of its life [2]. T Cha lies about 350 light-years from the Earth and is only about seven million years old. Up to now no forming planets have been found in these transitional discs, although planets in more mature discs have been seen before (http://www.eso.org/public/news/eso0842/, http://www.spacetelescope.org/news/heic0821/).

“Earlier studies had shown that T Cha was an excellent target for studying how planetary systems form,” notes Johan Olofsson (Max Planck Institute for Astronomy, Heidelberg, Germany), one of the lead authors of two papers in the journal Astronomy & Astrophysics that describe the new work. “But this star is quite distant and the full power of the Very Large Telescope Interferometer (VLTI) was needed to resolve very fine details and see what is going on in the dust disc.”

The astronomers first observed T Cha using the AMBER instrument and the VLT Interferometer (VLTI) [3]. They found that some of the disc material formed a narrow dusty ring only about 20 million kilometers from the star. Beyond this inner disc, they found a region devoid of dust with the outer part of the disc stretching out into regions beyond about 1.1 billion kilometers from the star.

Nuria Huelamo (Centro de Astrobiologia, ESAC, Spain), the lead author of the second paper, takes up the story: “For us the gap in the dust disc around T Cha was a smoking gun, and we asked ourselves: could we be witnessing a companion digging a gap inside its protoplanetary disc?”

However, finding a faint companion so close to a bright star is a huge challenge and the team had to use the VLT instrument NACO in a novel and powerful way, called sparse aperture masking, to reach their goal [4]. After careful analysis they found the clear signature of an object located within the gap in the dust disc, about one billion kilometers from the star — slightly further out than Jupiter is within our Solar System and close to the outer edge of the gap. This is the first detection of an object much smaller than a star within a gap in the planet-forming dust disc around a young star. The evidence suggests that the companion object cannot be a normal star [5] but it could be either a brown dwarf [6] surrounded by dust or, most excitingly, a recently formed planet.

Huelamo concludes: “This is a remarkable joint study that combines two different state-of-the-art instruments at ESO’s Paranal Observatory. Future observations will allow us to find out more about the companion and the disc, and also understand what fuels the inner dusty disc.”

[1] The transitional discs can be spotted because they give off less radiation at mid-infrared wavelengths. The clearing of the dust close to the star and the creation of gaps and holes can explain this missing radiation. Recently formed planets may have created these gaps, although there are also other possibilities.

[2] T Cha is a T Tauri star, a very young star that is still contracting towards the main sequence.

[3] The astronomers used the AMBER instrument (Astronomical Multi-BEam combineR) and the VLTI to combine the light from all four of the 8.2-meter VLT Unit Telescopes and create a “virtual telescope” 130 meters across.

[4] NACO (or NAOS-CONICA in full) is an adaptive optics instrument attached to ESO’s Very Large Telescope. Thanks to adaptive optics, astronomers can remove most of the blurring effect of the atmosphere and obtain very sharp images. The team used NACO in a novel way, called sparse aperture masking (SAM) to search for the companion. This is a type of interferometry that, rather than combining the light from multiple telescopes as the VLTI does, uses different parts of the mirror of a single telescope (in this case, the mirror of the VLT Unit Telescope 4). This new technique is particularly good for finding faint objects very close to bright ones. VLTI/AMBER is better suited to studying the structure of the inner disc and is less sensitive to the presence of a distant companion.

[5] The astronomers searched for the companion using NACO in two different spectral bands — at around 2.2 microns and at 3.8 microns. The companion is only seen at the longer wavelength, which means that the object is either cool, like a planet, or a dust-shrouded brown dwarf.

[6] Brown dwarfs are objects between stars and planets in size. They are not massive enough to fuse hydrogen in their cores but are larger than giant planets such as Jupiter.

This research was presented in two papers: Olofsson et al. 2011, “Warm dust resolved in the cold disk around T Cha with VLTI/AMBER”, and Huelamo et al. 2011, “A companion candidate in the gap of the T Cha transitional disk”, to appear in the journal Astronomy & Astrophysics.

Photos of the VLT: http://www.eso.org/public/images/archive/category/paranal/