Oreo’s “Out of this World” Global App

After conquering the seventh continent in its 100th birthday year, the World’s Favorite Cookie has decided to take on the universe in its 101st with a new, ground-breaking star chart messaging app; OREO Skies.
Putting its own, playful twist on traditional mobile messaging, OREOteamed up with Nokia to develop a smartphone app designed to connect people in a never-been-done before way: through the stars.

Using augmented reality technology, the OREO Skies mobile app, now available exclusively onNokia Lumia Windows smartphones, allows users to ignite the “child” inside by writing messages and attaching them to actual constellations revealed in the app. As the best-selling global cookie brand,OREO is offering people around the world a chance to connect with each other in a way that’s never been done before.

“The Mondelz International Mobile Innovation Lab with Nokia is a key component of our mobile strategy, together with our incubation program, Mobile Futures,” said Bonin Bough, Vice President for Global Media and Consumer Engagement at Mondelz International. “It is meant to be an experimentation lab aimed at pushing the envelope of technology and reinventing mobile experiences. Over the past year, we’ve been exploring different brands and platforms and we’re excited to launch theOREO Skies app into the marketplace as a result of the partnership.”

It’s Written In the Stars

Users that access the app can point their Nokia Lumia devices at the sky, no matter what time of day or night, and explore a map of the stars and constellations. When they touch a star in a constellation, it twists open like an OREO cookie to reveal a message left for one or more friends. Users can search the OREO Skies’ universe for specific stars, and friends are able to retrieve their message by following a compass in the upper-right corner of the display. 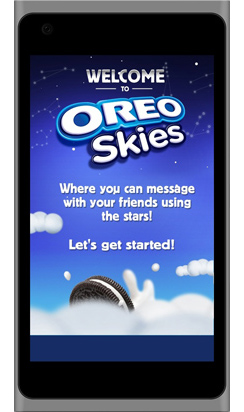 As an added bonus the person who sends the most messages during a lunar cycle (every 30 days) will “own the moon” for the next lunar cycle and can place a special message on the moon for all users of the Oreo Skies universe to see. A leaderboard will track all users in real-time.

OREO fans that don’t have a Nokia Lumia Windows smartphone can still delight in the fun of skywriting through the global OREO Facebook community of more than 31 million fans. Fans can message each other through a mobile or desktop version of the application on Facebook and follow the leaderboard.

Nokia teamed up with OREO in early 2012 as part of the Mondelz International Mobile Innovation Lab. “At Nokia, we are dedicated to creating quality products that users can depend on,” Bryan Biniak, Vice President of Global Partnerships and Application Development at Nokia. “As a global company with a history of innovation, we aim to delight users through a form of augmented reality unlike anything they’ve seen before. By creating an app on Nokia Lumia, OREO is able to engage its consumers around the world in an innovative way, using the power of mobile.”

Nokia is a global leader in mobile communications whose products have become an integral part of the lives of people around the world. Every day, more than 1.3 billion people use their Nokia to capture and share experiences, access information, find their way or simply to speak to one another. Nokia’s technological and design innovations have made its brand one of the most recognized in the world. For more information, visit http://www.nokia.com/about-nokia