Cross your eyes and break out the 3D glasses!
NASA’s New Horizons team has created new stereo views of the Kuiper Belt object nicknamed Ultima Thule — the target of the New Horizons spacecraft’s historic New Year’s 2019 flyby, four billion miles from Earth — and the images are as cool and captivating as they are scientifically valuable.

The 3D effects come from pairing or combining images taken at slightly different viewing angles, creating a “binocular” effect, just as the slight separation of our eyes allows us to see three-dimensionally. For the images on this page, the New Horizons team paired sets of processed images taken by the spacecraft’s Long-Range Reconnaissance Imager (LORRI) at 5:01 and 5:26 Universal Time on Jan. 1, from respective distances of 17,400 miles (28,000 kilometers) and 4,100 miles (6,600 kilometers), offering respective original scales of about 430 feet (130 meters) and 110 feet (33 meters) per pixel. 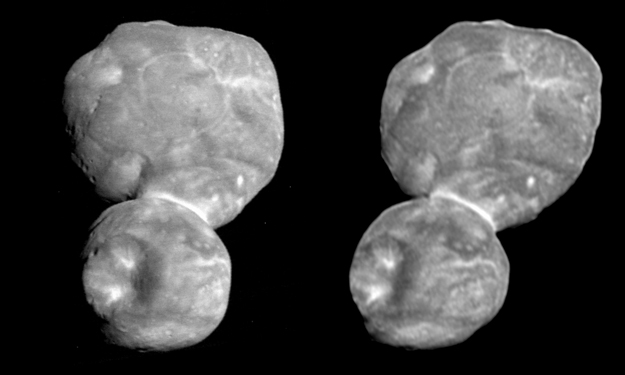 For this view, cross your eyes until the pair of images merges into one. It might help to place your finger or a pen just a couple of inches from your eyes, and focus on it. When the background image comes into focus, remove the closer object and concentrate on the image.

The viewing direction for the earlier sequence was slightly different than the later set, which consists of the highest-resolution images obtained with LORRI. The closer view offers about four times higher resolution per pixel but, because of shorter exposure time, lower image quality. The combination, however, creates a stereo view of the object (officially named 2014 MU69) better than the team could previously create.

“These views provide a clearer picture of Ultima Thule’s overall shape,” said mission principal investigator Alan Stern, from Southwest Research Institute (SwRI) in Boulder, Colorado, “including the flattened shape of the large lobe, as well as the shape of individual topographic features such as the “neck” connecting the two lobes, the large depression on the smaller lobe, and hills and valleys on the larger lobe.” 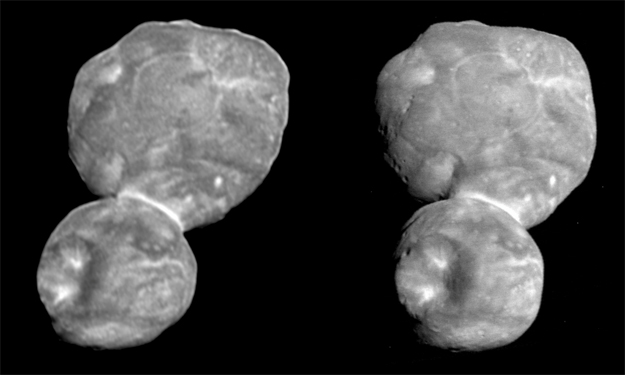 For this view, change your focus from the image by looking “through” it (and the screen) and into the distance. This will create the effect of a third image in the middle; try setting your focus on that third image.

“We have been looking forward to this high-quality stereo view since long before the flyby,” added John Spencer, New Horizons deputy project scientist from SwRI. “Now we can use this rich, three-dimensional view to help us understand how Ultima Thule came to have its extraordinary shape.”