Nearby Epsilon Eridani Planetary System Is Similar to Our Own

Located 10.5 light-years away in the southern constellation Eridanus, the star Epsilon Eridani, Eps Eri for short, is the closest planetary system around a star similar to the early Sun. It is a prime location to research how planets form around stars like our Sun, and is also the storied location of the Babylon 5 space station in the science fictional television series of the same name.

Previous studies indicate that Eps Eri has a debris disk, which is the name astronomers give to leftover material still orbiting a star after planetary construction has completed. The debris can take the form of gas and dust, as well as small rocky and icy bodies. Debris disks can be broad, continuous disks or concentrated into belts of debris, similar to our solar system’s asteroid belt and the Kuiper Belt — the region beyond Neptune where hundreds of thousands of icy-rocky objects reside. Furthermore, careful measurements of the motion of Eps Eri indicates that a planet with nearly the same mass as Jupiter circles the star at a distance comparable to Jupiter’s distance from the Sun.

With the new SOFIA images, Kate Su of the University of Arizona and her research team were able to distinguish between two theoretical models of the location of warm debris, such as dust and gas, in the Eps Eri system. These models were based on prior data obtained with NASA’s Spitzer space telescope.

One model indicates that warm material is in two narrow rings of debris, which would correspond respectively to the positions of the asteroid belt and the orbit of Uranus in our solar system. Using this model, theorists indicate that the largest planet in a planetary system might normally be associated with an adjacent debris belt.

The other model attributes the warm material to dust originating in the outer Kuiper-Belt-like zone and filling in a disk of debris toward the central star. In this model, the warm material is in a broad disk, and is not concentrated into asteroid belt-like rings nor is it associated with the any planets in the inner region. 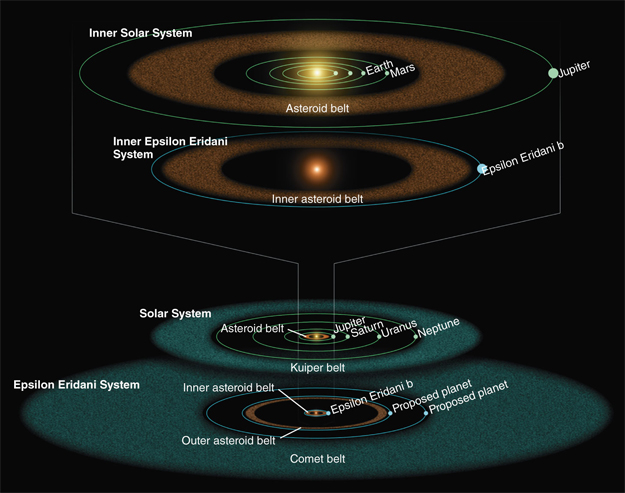 Using SOFIA, Su and her team ascertained that the warm material around Eps Eri is in fact arranged like the first model suggests; it is in at least one narrow belt rather than in a broad continuous disk.

These observations were possible because SOFIA has a larger telescope diameter than Spitzer, 100 inches (2.5 meters) in diameter compared to Spitzer’s 33.5 inches (0.85 meter), which allowed the team onboard SOFIA to discern details that are three times smaller than what could be seen with Spitzer. Additionally, SOFIA’s powerful mid-infrared camera called FORCAST, the Faint Object infraRed CAmera for the SOFIA Telescope, allowed the team to study the strongest infrared emission from the warm material around Eps Eri, at wavelengths between 25 and 40 microns, which are undetectable by ground-based observatories.

“The high spatial resolution of SOFIA combined with the unique wavelength coverage and impressive dynamic range of the FORCAST camera allowed us to resolve the warm emission around Eps Eri, confirming the model that located the warm material near the Jovian planet’s orbit,” said Su. “Furthermore, a planetary mass object is needed to stop the sheet of dust from the outer zone, similar to Neptune’s role in our solar system. It really is impressive how Eps Eri, a much younger version of our solar system, is put together like ours.”

This study was published in the Astronomical Journal on April 25, 2017.

SOFIA is a Boeing 747SP jetliner modified to carry a 100-inch diameter telescope. It is a joint project of NASA and the German Aerospace Center, DLR. NASA’s Ames Research Center in California’s Silicon Valley manages the SOFIA program, science and mission operations in cooperation with the Universities Space Research Association headquartered in Columbia, Maryland, and the German SOFIA Institute (DSI) at the University of Stuttgart. The aircraft is based at NASA’s Armstrong Flight Research Center’s Hangar 703, in Palmdale, California.