Astronomers at NASA and Pennsylvania State University have used NASA’s Swift satellite to create the most detailed ultraviolet light surveys ever of the Large and Small Magellanic Clouds, the two closest major galaxies.
“We took thousands of images and assembled them into seamless portraits of the main body of each galaxy, resulting in the highest-resolution surveys of the Magellanic Clouds at ultraviolet wavelengths,” said Stefan Immler, who proposed the program and led NASA’s contribution from the agency’s Goddard Space Flight Center in Greenbelt, Md.

The new images reveal about 1 million ultraviolet sources in the LMC and about 250,000 in the SMC. The images include light ranging from 1,600 to 3,300 angstroms, which is a range of UV wavelengths largely blocked by Earth’s atmosphere. Nearly a million ultraviolet sources appear in this mosaic of the Large Magellanic Cloud, which was assembled from 2,200 images taken by Swift’s Ultraviolet/Optical Telescope. The 160-megapixel image required a cumulative exposure of 5.4 days. The image includes light from 1,600 to 3,300 angstroms — UV wavelengths largely blocked by Earth’s atmosphere — and has an angular resolution of 2.5 arcseconds at full size. The LMC is about 14,000 light-years across. Slide your cursor over the image to compare the galaxy’s appearance in optical light with this ultraviolet portrait. UV image credit: NASA/Swift/S. Immler (Goddard) and M. Siegel (Penn State), Visible image credit: Axel Mellinger, Central Michigan Univ., UV image, Visible-light image, High-res images

“Prior to these images, there were relatively few UV observations of these galaxies, and none at high resolution across such wide areas, so this project fills in a major missing piece of the scientific puzzle,” said Michael Siegel, lead scientist for Swift’s Ultraviolet/Optical Telescope (UVOT) at the Swift Mission Operations Center at the university in State College, Pa.

Despite their modest sizes, the galaxies loom large in the sky because they are so close to us. Both extend far beyond the UVOT’s field of view, which meant thousands of images were needed in order to cover both galaxies in three ultraviolet colors centered at wavelengths of 1,928 angstroms, 2,246 angstroms, and 2,600 angstroms.

This visible light mosaic shows the Large Magellanic Cloud and Small Magellanic Cloud. Separated by about 21 degrees, the two galaxies are readily visible from the Southern Hemisphere as faint, glowing patches in the night sky. The LMC and SMC are the closest major galaxies to our own and lie about 163,000 and 200,000 light-years away, respectively. Credit: Axel Mellinger, Central Michigan Univ., Larger image, High-res images.

Viewing in the ultraviolet allows astronomers to suppress the light of normal stars like the sun, which are not very bright at such higher energies, and provides a clearer picture of the hottest stars and star-formation regions. No telescope other than UVOT can produce such high-resolution wide-field multicolor surveys in the ultraviolet. Swift’s wide-field imaging capabilities provide a powerful complement to the deeper, but much narrower-field imaging power of NASA’s Hubble Space Telescope. 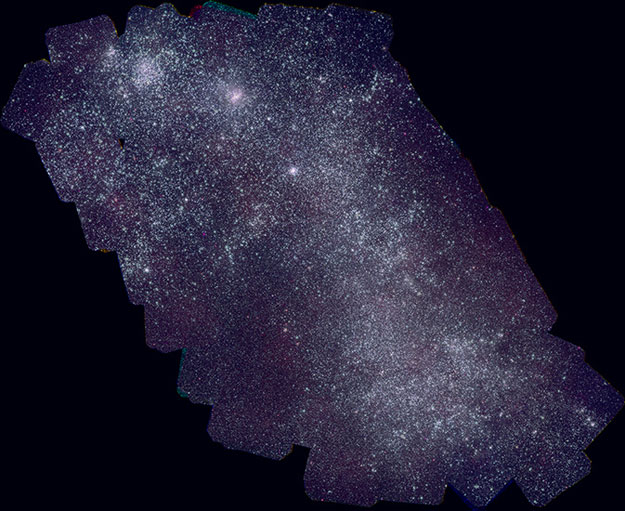 The Swift mosaic of the Small Magellanic Cloud contains about 250,000 ultraviolet sources. The 57-megapixel image was assembled from 656 separate snapshots. The image has a total exposure time of 1.8 days, an angular resolution of 2.5 arcseconds at full size, and maps UV light at wavelengths between 1,600 and 3,300 angstroms. The SMC is about 7,000 light-years across. Credit: NASA/Swift/S. Immler (Goddard) and M. Siegel (Penn State), Larger image, High-res images.

To produce the 160-megapixel LMC mosaic, Swift’s UVOT acquired 2,200 snapshots for a cumulative exposure of 5.4 days. The 57-megapixel SMC image comprises 656 individual images with a total exposure of 1.8 days.

Both images have an angular resolution of 2.5 arc seconds, which is a measure of their sharpness. Sources separated by this angle, which is equivalent to the size of a dime seen from 1mile away, are visible as distinct objects.

“With these mosaics, we can study how stars are born and evolve across each galaxy in a single view, something that’s very difficult to accomplish for our own galaxy because of our location inside it,” Immler said.

The Large and Small Magellanic Clouds are readily visible from the Southern Hemisphere as faint, glowing patches in the night sky. The galaxies are named after Ferdinand Magellan, the Portuguese explorer who in 1519 led an expedition to sail around the world. He and his crew were among the first Europeans to sight the objects.

Pennsylvania State University manages the Swift Mission Operations Center, which controls Swift’s science and flight operations. Goddard manages Swift, which was launched in November 2004. The satellite is operated in collaboration with Penn State, the Los Alamos National Laboratory in New Mexico and Orbital Sciences Corp. in Dulles, Va. International collaborators are in the United Kingdom and Italy, and the mission includes contributions from Germany and Japan.
Related Links