NASA’s Mars Science Laboratory mission is approaching its biggest turning point since landing its rover, Curiosity, inside Mars’ Gale Crater last summer.
Curiosity is finishing investigations in an area smaller than a football field where it has been working for six months, and it will soon shift to a distance-driving mode headed for an area about 5 miles (8 kilometers) away, at the base Mount Sharp.

In May, the mission drilled a second rock target for sample material and delivered portions of that rock powder into laboratory instruments in one week, about one-fourth as much time as needed at the first drilled rock.

“We’re hitting full stride,” said Mars Science Laboratory Project Manager Jim Erickson of NASA’s Jet Propulsion Laboratory, Pasadena, Calif. “We needed a more deliberate pace for all the first-time activities by Curiosity since landing, but we won’t have many more of those.” 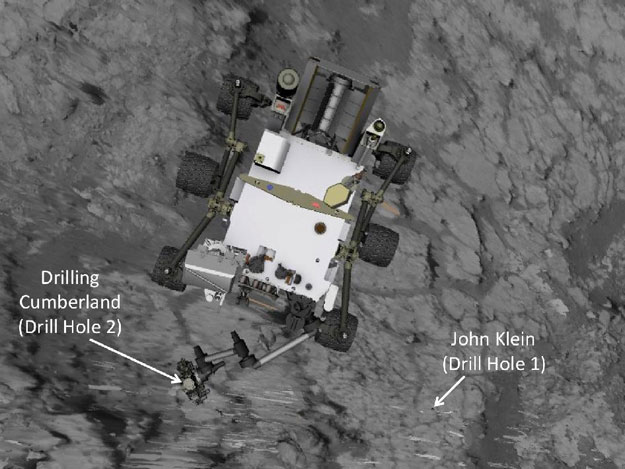 This image produced from software used for planning drives of NASA’s Mars rover Curiosity depicts the location and size of the rover when it was driven into position for drilling into rock target “Cumberland.” Cumberland was the mission’s second drilling target. This image also shows the proximity to the first drilling target, “John Klein,” which is about nine feet (2.75 meters) away from the Cumberland target. To get from one to the other, the rover backed away from John Klein, pivoted, and pulled forward toward Cumberland. Curiosity arrived at the depicted position during the 274th Martian day, or sol, of the rover’s work on Mars (May 14, 2013). The outline of the rover is from Rover Sequencing and Visualization Program software, with ground imagery from a mosaic of images taken by Curiosity’s Navigation cameras. Image credit: NASA/JPL-Caltech

No additional rock drilling or soil scooping is planned in the “Glenelg” area that Curiosity entered last fall as the mission’s first destination after landing. To reach Glenelg, the rover drove east about a third of a mile (500 meters) from the landing site. To reach the next destination, Mount Sharp, Curiosity will drive toward the southwest for many months.

“We don’t know when we’ll get to Mount Sharp,” Erickson said. “This truly is a mission of exploration, so just because our end goal is Mount Sharp doesn’t mean we’re not going to investigate interesting features along the way.” 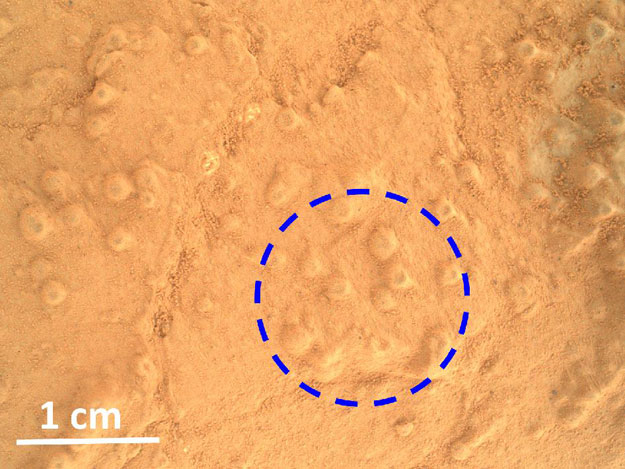 This image taken by the Mars Hand Lens Imager (MAHLI) on NASA’s Mars rover Curiosity shows the texture of the patch of flat-lying bedrock called “Cumberland,” which was the mission’s second target for use of the rover’s sample-collecting drill. Cumberland was selected to be similar to the first, “John Klein,” but with a slightly greater concentration of erosion-resistant granules that cause surface bumps. The bumps are concretions, or clumps of minerals that formed when water soaked the rock long ago. Analysis of a sample containing more material from these concretions could provide information about the variability within the rock layers of both drill targets, John Klein and Cumberland. This image was taken on the 279th Martian day, or sol, of the mission (May 19, 2013) from a distance of 2 inches (5 centimeters). Credit: NASA/JPL-Caltech/MSSS.

Images of Mount Sharp taken from orbit and images Curiosity has taken from a distance reveal many layers where scientists anticipate finding evidence about how the ancient Martian environment changed and evolved.

While completing major first-time activities since landing, the mission has also already accomplished its main science objective. Analysis of rock powder from the first drilled rock target, “John Klein,” provided evidence that an ancient environment in Gale Crater had favorable conditions for microbial life: the essential elemental ingredients, energy and ponded water that was neither too acidic nor too briny.

The rover team chose a similar rock, “Cumberland,” as the second drilling target to provide a check for the findings at John Klein. Scientists are analyzing laboratory-instrument results from portions of the Cumberland sample. One new capability being used is to drive away while still holding rock powder in Curiosity’s sample-handling device to supply additional material to instruments later if desired by the science team. 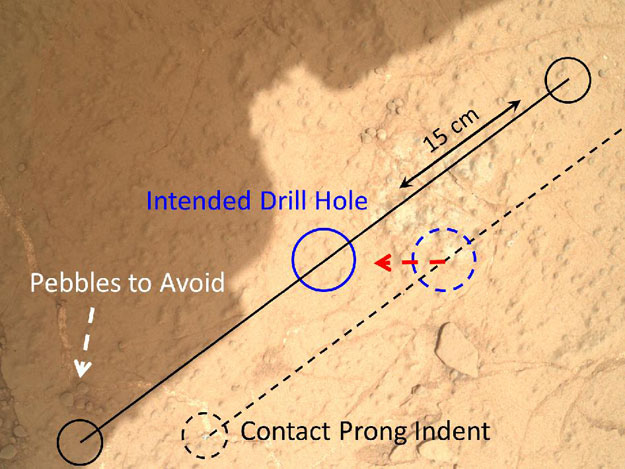 This image demonstrates how engineers place the drill carried by NASA’s Mars rover Curiosity onto rock targets. They first set down the drill’s two stabilizing prongs near the target, as shown by the dashed line. From there, they assess the placement of the prongs in relation to the target to determine the correct, final placement of the drill. This approach allows for higher accuracy, both to hit the target and avoid placing a prong on unstable areas or pebbles. This image of the “Cumberland” drill target was taken by the Mars Hand Lens Imager (MAHLI) on the 279th Martian day, or sol, of the mission (May 19, 2013), from a distance of 9.8 inches (25 centimeters). Image credit: NASA/JPL-Caltech/MSSS.

For the drill campaign at Cumberland, steps that each took a day or more at John Klein could be combined into a single day’s sequence of commands. “We used the experience and lessons from our first drilling campaign, as well as new cached sample capabilities, to do the second drill campaign far more efficiently,” said sampling activity lead Joe Melko of JPL. “In addition, we increased use of the rover’s autonomous self-protection. This allowed more activities to be strung together before the ground team had to check in on the rover.”

The science team has chosen three targets for brief observations before Curiosity leaves the Glenelg area: the boundary between bedrock areas of mudstone and sandstone, a layered outcrop called “Shaler” and a pitted outcrop called “Point Lake.”

JPL’s Joy Crisp, deputy project scientist for Curiosity, said “Shaler might be a river deposit. Point Lake might be volcanic or sedimentary. A closer look at them could give us better understanding of how the rocks we sampled with the drill fit into the history of how the environment changed.” 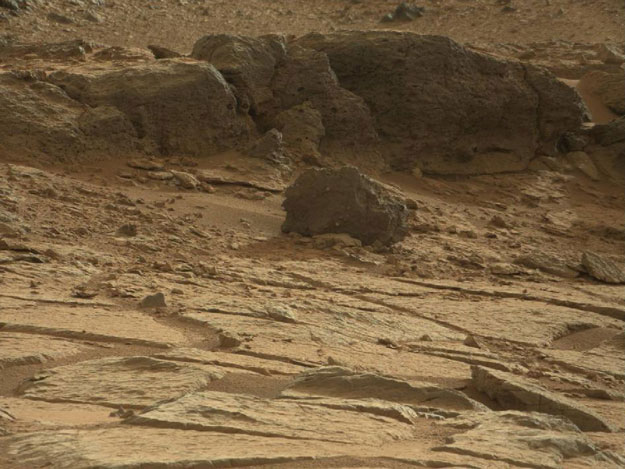 One priority target for a closer look by NASA’s Mars rover Curiosity before the rover departs the “Glenelg” area east of its landing site is the pitted outcrop called “Point Lake,” in the upper half of this image. The outcrop as seen from this angle is about 7 feet (2 meters) wide and 20 inches (50 centimeters) high. The texture, with its voids or cavities, sets Point Lake apart from other outcrops in the vicinity. A closer inspection may yield information about whether it is a volcanic or sedimentary deposit. This image was taken by the right (telephoto-lens) camera of the Mast Camera (Mastcam) on the rover during the 193rd Martian day, or sol, of Curiosity’s work on Mars (Feb. 20, 2013). It is presented here in raw color, as recorded by the camera under Martian lighting conditions. Credit: NASA/JPL-Caltech/MSSS.

JPL, a division of the California Institute of Technology, Pasadena, manages the Mars Science Laboratory Project for NASA’s Science Mission Directorate in Washington. For more about the mission, visit: http://www.nasa.gov/msl and http://mars.jpl.nasa.gov/msl.