The puzzling appearance of an ice cloud seemingly out of thin air has prompted NASA scientists to suggest that a different process than previously thought — possibly similar to one seen over Earth’s poles — could be forming clouds on Saturn’s moon Titan.
Located in Titan’s stratosphere, the cloud is made of a compound of carbon and nitrogen known as dicyanoacetylene (C4N2), an ingredient in the chemical cocktail that colors the giant moon’s hazy, brownish-orange atmosphere.

Decades ago, the infrared instrument on NASA’s Voyager 1 spacecraft spotted an ice cloud just like this one on Titan. What has puzzled scientists ever since is this: they detected less than 1 percent of the dicyanoacetylene gas needed for the cloud to condense.

Recent observations from NASA’s Cassini mission yielded a similar result. Using Cassini’s composite infrared spectrometer, or CIRS — which can identify the spectral fingerprints of individual chemicals in the atmospheric brew — researchers found a large, high-altitude cloud made of the same frozen chemical. Yet, just as Voyager found, when it comes to the vapor form of this chemical, CIRS reported that Titan’s stratosphere is as dry as a desert.

“The appearance of this ice cloud goes against everything we know about the way clouds form on Titan,” said Carrie Anderson, a CIRS co-investigator at NASA’s Goddard Space Flight Center in Greenbelt, Maryland, and lead author of the study.

The typical process for forming clouds involves condensation. On Earth, we’re familiar with the cycle of evaporation and condensation of water. The same kind of cycle takes place in Titan’s troposphere — the weather-forming layer of Titan’s atmosphere — but with methane instead of water. 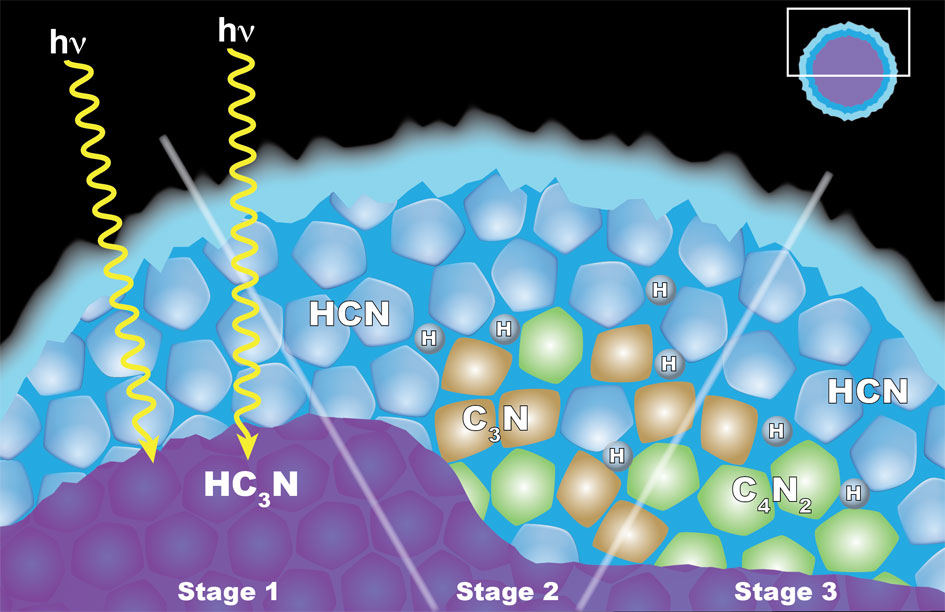 This graphic illustrates how scientists think “solid state” chemistry may be taking place in ice particles that form clouds in the atmosphere of Saturn’s moon Titan. Credit: NASA/JPL-Caltech/GSFC.

A different condensation process takes place in the stratosphere — the region above the troposphere — at Titan’s north and south winter poles. In this case, layers of clouds condense as the global circulation pattern forces warm gases downward at the pole. The gases then condense as they sink through cooler and cooler layers of the polar stratosphere.

“For clouds that condense, this equilibrium is mandatory, like the law of gravity,” said Robert Samuelson, an emeritus scientist at Goddard and a co-author of the paper.

But the numbers don’t compute for the cloud made from dicyanoacetylene. The scientists determined that they would need at least 100 times more vapor to form an ice cloud where the cloud top was observed by Cassini’s CIRS.

One explanation suggested early on was that the vapor might be present, but Voyager’s instrument wasn’t sensitive enough in the critical wavelength range needed to detect it. But when CIRS also didn’t find the vapor, Anderson and her Goddard and Caltech colleagues proposed an altogether different explanation. Instead of the cloud forming by condensation, they think the C4N2 ice forms because of reactions taking place on other kinds of ice particles. The researchers call this “solid-state chemistry,” because the reactions involve the ice, or solid, form of the chemical.

The first step in the proposed process is the formation of ice particles made from the related chemical cyanoacetylene (HC3N). As these tiny bits of ice move downward through Titan’s stratosphere, they get coated by hydrogen cyanide (HCN). At this stage, the ice particle has a core and a shell comprised of two different chemicals. Occasionally, a photon of ultraviolet light tunnels into the frozen shell and triggers a series of chemical reactions in the ice. These reactions could begin either in the core or within the shell. Both pathways can yield dicyanoacteylene ice and hydrogen as products.

The researchers got the idea of solid-state chemistry from the formation of clouds involved in ozone depletion high above Earth’s poles. Although Earth’s stratosphere has scant moisture, wispy nacreous clouds (also called polar stratospheric clouds) can form under the right conditions. In these clouds, chlorine-bearing chemicals that have entered the atmosphere as pollution stick to crystals of water ice, resulting in chemical reactions that release ozone-destroying chlorine molecules.

“It’s very exciting to think that we may have found examples of similar solid-state chemical processes on both Titan and Earth,” said Anderson.

The researchers suggest that, on Titan, the reactions occur inside the ice particles, sequestered from the atmosphere. In that case, dicyanoacetylene ice wouldn’t make direct contact with the atmosphere, which would explain why the ice and the vapor forms are not in the expected equilibrium.

“The compositions of the polar stratospheres of Titan and Earth could not differ more,” said Michael Flasar, CIRS principal investigator at Goddard. “It is amazing to see how well the underlying physics of both atmospheres has led to analogous cloud chemistry.”

The findings are published in the journal Geophysical Research Letters.

The Cassini-Huygens mission is a cooperative project of NASA, ESA (European Space Agency) and the Italian Space Agency. NASA’s Jet Propulsion Laboratory, a division of Caltech in Pasadena, manages the mission for NASA’s Science Mission Directorate, Washington. JPL designed, developed and assembled the Cassini orbiter. The CIRS instrument was built by Goddard.